First Dinky had one, now it’s Akemie’s turn. If you’re wondering what I’m talking about, it’s taikos, a term used for a range of Japanese drums (although often associated with the large ones taking a good pounding at festivals). Akemie’s Taiko is an FM-based Eurorack module covering CV-tweakable percussion and synth roles too. 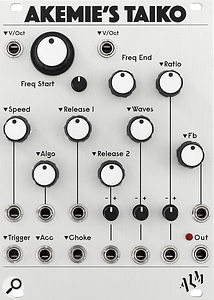 ALM/Busy Circuits Akemie’s Taiko. Size: 18hp. Current: +12V rail = 70mA; -12V rail = 30mA.Every module incorporates a ‘new old stock’ Yamaha OPL3 IC. This chip produces 4-operator FM synthesis with a choice of eight different waveforms ranging from the obligatory sine through square to an ‘almost saw’ shape. There are approximately 64 combinations of waves, and what you can achieve with them depends first and foremost on the selected algorithm, ie. the way the operators are configured. Six algorithms are available, the first two using just a pair of operators. My only slight regret concerns the lack of visual information of the values selected; this slows down the ability to return to favourite combinations later. However, even with this slight ambiguity, once you start applying CV to algorithm selection and the other FM parameters, it opens up the engine remarkably.

Unsurprisingly, given that this is a 1980s chip, some parameters have a fairly coarse resolution, but I’m pleased to say the steppiness never becomes an issue. That’s because the moment a trigger is received, all parameter values are ‘snapshotted’ until the next trigger. It’s a process that turns out coherent hits even when you start tossing in wildly-changing voltages to the many CV inputs.

Whether you’re confident programming FM already, or simply content to twiddle and listen, some appreciation of the controls is useful. Taking the Speed knob, for example; at settings above nine o’clock, it becomes pitch modulation between two values: Freq Start and Freq End. When cranked up to its maximum, Speed becomes another FM source, passing talking drums, alien wobble boards, sizzling cymbals and every flavour of dirty noise along the way.

Where percussion is concerned, the more noise the better. To squeeze out more, feedback is always readily available (on operator 1). Its effects are often easiest to differentiate on the simpler algorithms and high levels of feedback are handy to generate trashy FM noise bursts that are still perfectly applicable to synthesizing snares, hats and a whole bunch of lo-fi games console hits.

The built-in envelope shaping is simple (there’s no attack) and the longest release times clock in at many minutes! The knobs are mapped to the release stages of opposing operators; so in a 4-op algorithm, Release 1 handles operators 1 & 3, Release 2, operators 2 & 4. The algorithms shift carriers and modulators around creatively, offering a wider range of possibilities than the relatively minimal interface implies.

The last parameter to mention is the single Ratio control, which you’d ordinarily need to set the frequency of each operator. ALM describe its mapping as “massaged to more likely hit the interesting FM-like sounds rather than dull VL-Tone style”, and I reckon they succeeded beautifully. Ratio is a cunning blend of the four knobs of the Akemie’s Castle module and sweeps upwards through the frequency ranges for each operator. As single FM controls go, it’s probably unique.

Within the limits of its instantaneous attack, Akemie’s Taiko delivers synth sounds too. Its pitch input tracks 1V/oct and many trademark FM tones are quickly discovered: plucked strings, chimes, gongs, organs, clavs and even a passable ‘Lately Bass’. Early in the proceedings, I rigged up a simple step sequencer, connected an LFO to every available input and sat back amazed at endlessly morphing synth and percussion tones. After that, the only problem I experienced was in deciding what role it should take in any particular session. Great though the metallic clangs, crunchy snares and loggy log-drums are, I found myself reaching for it just as often for cutting synth tones.

Other than feeling that one may not be sufficient, this module is tough to fault. There’s a faint high-frequency tone present (due to the Yamaha chip used), but I doubt I’d have noticed if the manual hadn’t drawn my attention to it first. Akemie’s Taiko is a refreshing antidote to an endless supply of familiar analogue drums. Putting this classic synthesis engine under knobby and CV control provides yet another demonstration that FM still has plenty to give. Highly recommended.