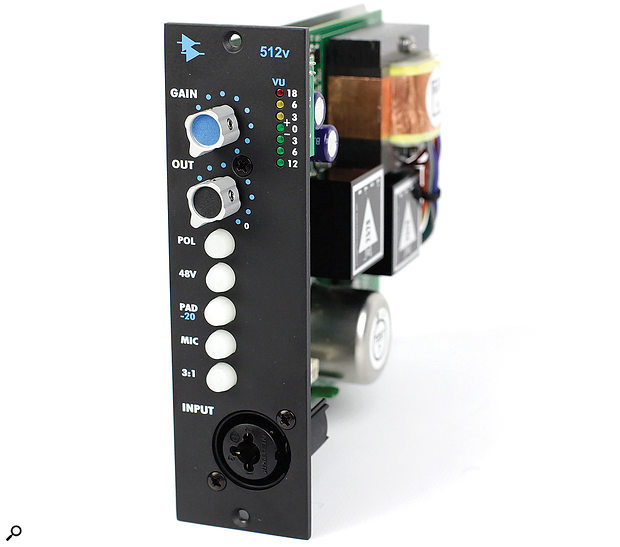 API’s 512 preamp design is a classic — and now there are even more reasons to love it!

Although the original 512 preamp was soon succeeded by the 512b and, later, by the 512c, its design topology — a transformer-balanced input feeding API’s own 312 microphone preamp card with its proprietary 2520 discrete op-amp and 2503 balancing output transformer — has been carried forward pretty much unchanged since the 1960s, into the latest member of the dynasty, the 512v 500-series microphone preamplifier. I say pretty much, because there are some tweaks that should please API devotees everywhere...

If you’ve ever encountered a 512c in the wild, the 512v’s front panel will have an air of familiarity. Its black, blue-logo’d fascia, white legending, seven-LED VU meter scaled from -12 to +18 dBVU, and the blue-centred, silver gain knob are all as before. However the push-button selectors for polarity reverse, 48V phantom power, -20dB pad and mic input (line input is the default) have lost their indicator LEDs, and have been joined by a new button, intriguingly marked 3:1. All buttons are now internally illuminated when active. In addition, a detented, black-centred output attenuator knob has been positioned beneath the gain control and, in order to accommodate this and the additional switch, the 512c’s separate front-panel balanced XLR and quarter-inch high-impedance jack inputs have been paired together in a combination connector.

Internally, the 512c’s Cinemag input transformer, 2520 op-amp and 2503 output transformer are all present, and have been joined by a second 2520 module and two compact Panasonic DPDT surface-mount relays — one of which would appear to handle the mic/line switching, whilst the second (I suspect) has something to do with that intriguing 3:1 switch.

PCB layout and component differences between the 512c and the 512v are also evident. Although the apparent relative positions of the ‘first’ 2520 and the Cinemag and 2503 transformers remain pretty much as they were in the 512c, fitting in the second 2520 has required additional components, which have necessitated a practically wholesale move to surface-mount devices (SMD) in the 512v. Happily, there are still a number of full-size capacitors and resistors on view and, since these (like the replacement SMDs in other parts of the audio circuitry) have retained the same component numbers as their counterparts in the 512c, I would think that the audio path remains as true to the original as it ever was.

One minor change to note is that the signed inspection label on the 512v has had to move from its PCB position on the 512c to the side of the 2503. Since the placement of the 2503 in the 512v seems to use up virtually every millimetre of the 500-series hardware width specification, if that label starts lifting (as it had on the review unit) then it may well catch on the front panel of a neighbouring unit in the rack — especially if that particular unit is on the outer edges of the 500-series hardware lateral tolerance.

Having successfully slipped it into a convenient gap in my Radial 500-series rack, I set about lining up the 512v. 0VU on its LED meter (which meters the post-gain input level) gave me -18dBFS on the meter of my MOTU 896, with the detented output attenuation control in the two o’clock position. Turning that control clockwise to zero attenuation added a further 6dB to the output level. Turn it fully anti-clockwise and, as you might expect, the 512v’s output level is reduced to zero.

The mysterious front-panel switch that I mentioned is, in fact, another attenuator that works by changing tap selection at the 2503 output transformer to 3:1. This produced a metered drop of 12dB in the 512v’s output, which means that you should be able to push the 512v’s input and output transformers really hard before the unit reaches its +30dB clipping point. If you’re running the 512v hard without the 3:1 tap reduction, you have the option of using the output attenuator to protect the next stage in your audio chain from being overloaded, should that be necessary.

In use, the 512v is a very impressive performer. With its gain held back the 512v produces a clear, warm, punchy, dynamic sound with a crisp high end, a detailed mid-range and a really solid bass. I couldn’t fault its performance with acoustic guitar, percussion and my vocals on various AKG and DPA condenser microphones. As you might expect from a 1960s mic pre, the 512v was an ideal partner for dynamic microphones, especially my elderly Shure SM57, while a bass DI’d through the 512v’s jack input had both a sense of weight and clear articulation, a combination that not all mic preamps can deliver.

Wind up the gain on a louder source and the 512v reveals the depth in its character, the sound becoming somehow bigger and richer as the transformers start to saturate. Of course, increasing the input level and gain increases the output level, and the variable output attenuator — a feature that engineers have long been asking for on the 512c — coupled with the 512v’s 3:1 tap, gives you options not only in the extent to which you drive the unit’s output transformer, but also in the balance between that and the input capabilities of the next stage in your recording chain.

By any standard, the API 512v is a superb microphone preamplifier with its own distinctive sonic signature. The way that this latest variant of the 512c enables you to drive its transformers whilst still maintaining your level matching with the next link in your audio setup opens up a range of artistic decisions on how you manipulate transformer-based distortion to create the sound that you want to hear.

Working with the 512v is completely intuitive, apart from the curious clockwise rotation of the combination XLR/line connector, which confused me for a few seconds. And personally, I think a detented gain control would have been nice, just to aid repeatability and to ease setting up a stereo pair.

So there it is: the API 512v, an updated take on the legendary 512c mic preamp design, but that makes integration with present-day recording practices a simple proposition by giving you the facility to drive its output transformer that bit harder, and to attenuate its output to match a wide range of audio interfaces. Who wouldn’t want one?

At this level of 500-series price and performance, you’ll probably be looking at, amongst others, units such as the Neve 1073LB, the Sunset Sound S1P Tutti, the Electrodyne 501, the BAE 1073MPL, the Chandler Little Devil, the Shadow Hills Mono GAMA and the RND Portico 517. Lower down the price range, you’ll find a similar sonic character in the Black Lion Audio B12A MkII and the Warm Audio WA12. If you’re handy with a soldering iron, you might consider a DIY project such as the VP28 from Classic Audio Products Inc.

This sensibly updated version of the 512c should please a lot of people: the API 512v adds an output level attenuator and a 3:1 transformer tap in order to deliver the classic API sound character in a package more suited to present-day, DAW-oriented recording workflows.