Compression: What Do All Those Knobs Do?

How To Make Compressors Do What You Want By Sam Inglis 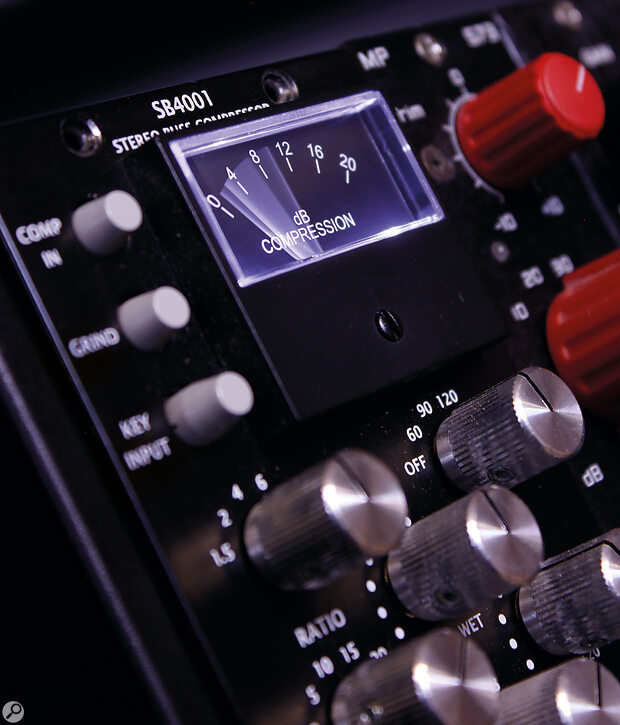 Dynamics processing is a core mixing technique, but it’s often misunderstood. We explain how to make a compressor do what you want it to!

Sound is dynamic. It varies in level on a large timescale, such as when a loud finale follows a reflective slow movement. It also varies on a much smaller scale. For example, each time we hit a piano key, the note starts loud and then dies away.

When we record or mix sound, we sometimes want to alter this dynamic behaviour. We might wish to amplify the quiet passages so they can be heard more easily. We might seek to make a performance appear more consistent. We might even want to change the dynamic character of individual notes, for instance by making them sound more or less staccato.

The simplest way to alter dynamics is to adjust the level using a fader. A human listener can follow the large‑scale dynamic variation in a piece of music and make it louder or quieter as appropriate. However, small‑scale dynamic variation — sometimes known as micro‑dynamics — happens too fast for a human operator to respond reliably. Enter the compressor: a device that ‘listens’ to the input signal, analyses its dynamic variation, and adjusts the level automatically in response.

Some compressors have almost no controls at all. Others bristle with an intimidating array of obscurely-named knobs. The aim of this article is to demystify these parameters and help you to use compressors with confidence.

The first thing should always be to ask yourself why you’re using a compressor at all, and what result you’re aiming for.

Conceptually, a compressor is like an automated fader. It’s a transformative rather than an additive process: it modifies, rather than augments, the sound. For this reason, a compressor plug‑in or hardware unit would usually be used as an insert, not an auxiliary send effect. If we want to compress multiple sources at once, we either need to use a separate compressor for each of them, or bus them to a single channel and compress that channel. Both are valid approaches, but they have very different effects and applications.

Most of the key controls on a compressor adjust the circuit or algorithm that decides whether the input signal should be turned down or left alone. This is known as the detector, and it usually receives its own, dedicated copy of the input signal, on a separate path known as the side‑chain.

A basic detector could simply compare the peak level of this side‑chain signal with a chosen fixed value, and trigger gain reduction in the audio path whenever the one exceeds the other. The lower we set this value, the more likely the signal level will be higher at any given moment, and the more often compression will happen. The fixed value in this scenario is known as the threshold, and this is one of the key parameters in nearly all compressor designs.

If the aim is to recreate the way our ears respond to loudness, however, this sort of detection will be a long way wide of the mark. Using peak level as a surrogate for loudness ignores the fact that two signals with the same peak level can sound wildly different to the human ear. It makes no distinction between sudden and sustained sounds, or between low and high‑frequency sounds. 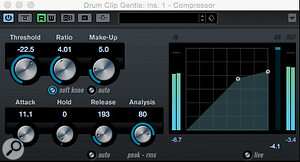 The stock Compressor plug‑in bundled with Steinberg’s Cubase has an Analysis control that sets the balance between peak and RMS detection.A more sophisticated detector circuit thus measures the rolling average of the side‑chain signal level. This average is known as the ‘root mean square’ or RMS value, and although this still isn’t a perfect substitute for loudness as we perceive it, it’s usually better than the peak value. Some compressors offer the option to switch between RMS and peak detection; usually, RMS will give a smoother and more natural response, but peak will react faster and may be useful on very percussive sources, or when the aim is to ensure that a particular peak level can’t be exceeded. 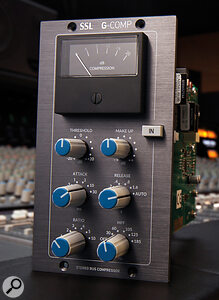 The famous SSL compressor has the standard Threshold, Ratio, Attack and Release controls and is a hugely versatile device.Whether it uses peak or RMS detection, a compressor is of limited value if its reactions are always instantaneous. A device that turns the signal down immediately it exceeds the threshold can’t respond to dynamic variation on a larger scale. It can also cause distortion on low‑frequency sounds, by kicking in on every cycle and thus changing the waveform. Even if we can’t hear distortion, we may well be able to hear other artifacts.

For this reason, nearly all compressors have two additional parameters, known as their ‘time constants’. The attack control allows us to slow down the initial action of the compressor. Let’s say that the detector has determined that 4dB gain reduction is appropriate on a given peak. If we set the attack time to zero, this 4dB level drop will be applied straight away. If we set it to 100 milliseconds, gain reduction will be applied gradually, reaching 4dB only after that time. In human terms, it’s the difference between having a fader instantly jump to the ‑4dB point, and having it moved smoothly to that point.

The release time constant has a similar role at the other end of the process. With an immediate release, the compressor will stop acting the instant the input level drops below the threshold. A longer release time causes it to relax its attenuation more smoothly.

Together, these four key parameters provide a lot of flexibility for shaping the response of the compressor. Lowering the threshold will mean gain reduction takes place more often. It also means the signal is more likely to exceed the threshold by a greater margin, and will thus be turned down further. Increasing the ratio likewise means that signals exceeding the threshold will be turned down more. Longer time constants, meanwhile, tend to make the action of the compressor smoother, and more focused on long‑term dynamic variation rather than micro‑dynamics.

One important thing to note is that detection is a moving target. For example, let’s say we set the attack time to 100ms, and the ratio to 4:1. A peak that exceeds the threshold by 8dB will, in theory, trigger gain reduction that steadily increases to 6dB after 100ms. But if that peak is only 50ms in duration, the signal will fall below the threshold again before the attack phase is over. The detector will quickly ‘change its mind’ and switch the compressor into its release phase, so 6dB gain reduction will never be reached. 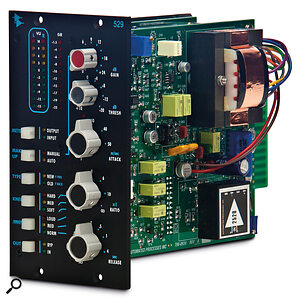 API’s 529 compressor provides the option to switch between feed-back (‘old’) and feed‑forward (‘new’) topologies.Another factor affecting the position of this moving target is the topology of the compressor: whether the side‑chain signal that feeds the detector is tapped before or after any gain reduction takes place. A feed‑forward compressor taps the side‑chain from the raw input signal, but in a feeback architecture, the side‑chain is derived from the processed signal. There are a few compressors that can be switched between the two modes; in general, a feed‑forward compressor has a snappier and more obvious action, but offers less precise control of level, while a feedback design is smoother and more accurate.

If a compressor has the four key parameters described so far — and most do — that’s enough to make it a very flexible tool. Before we move on to consider some additional controls, let’s consider how these parameters might be used to achieve different results.

On a snare or kick drum track, we could choose a fast attack and a medium release, a high ratio and a fairly high threshold. Then, only the loudest hits would trigger compression, and would do so immediately: useful for levelling out an unevenly played part. By contrast, if we increase the attack time and lower the threshold, we ensure that all hits trigger compression, but only after the initial transient has passed. This has audibly different results. The sound of the drum will be changed, emphasising the attack of each hit and reducing the sustain. We might take this approach if, for example, the drum is ringing more than we want.

Now let’s think about the different ways a compressor placed across the entire mix bus might respond. By setting a very high threshold, the shortest possible attack and the highest possible ratio, we can approximate a special type of compressor called a limiter. In effect, we’re specifying a ‘ceiling’, a level above which no signal is allowed to creep. Any peaks that dare to show themselves above the threshold instantly trigger gain reduction, ensuring that this ceiling level is never breached. 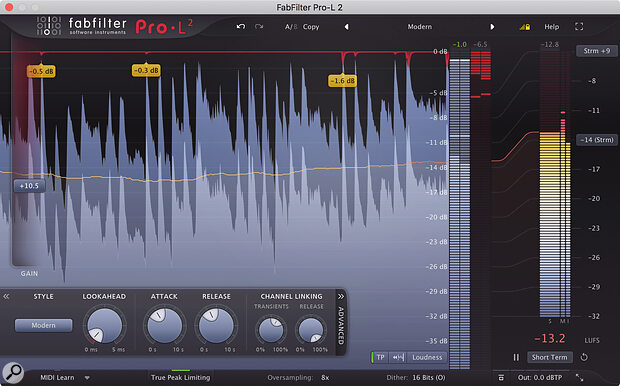 A peak limiter such as FabFilter’s Pro‑L 2 is a specialised kind of dynamics processor optimised to work with very fast attack and release times and very high ratios, in order to prevent any peaks exceeding a fixed ‘ceiling’ level.

We can achieve a completely different effect by setting a very low threshold, a very low ratio (perhaps as low as 1.1:1) and more moderate time constants. In this scenario, the detector is triggering compression most of the time, and the ‘moving target’ effect described above is continuously in action. The end result is a series of complex but subtle dynamic changes that we hear as a gentle smoothing‑out of the mix.