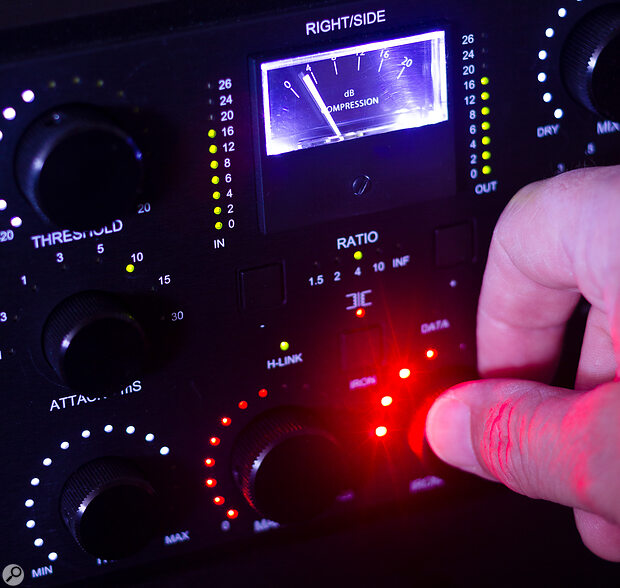 Want the sound and tactile experience of hardware but the convenience of plug‑ins? Wes Audio have the answer...

Regular readers will know that I’ve been smitten with Wes Audio’s digitally controlled analogue gear and that I’ve evaluated various devices inspired by the SSL 4k bus compressor. The ngBusComp brings these worlds together in the most impressive reimagining of the SSL design I’ve yet encountered. As with the other ng (‘next generation’) products, this analogue compressor can be controlled using front‑panel buttons and encoders, a dedicated DAW plug‑in, or both. The communication between them is bidirectional and they never feel out of sync.

The build quality is flawless, inside and out. A black, 3U chassis is adorned with a substantial, brushed‑finish, metal panel which sports many controls, all a pleasing size and generously spaced. The encoders’ knurled knobs have just enough ‘stiffness’ to provide useful tactile feedback and several are touch‑sensitive, their LED indicator rings becoming brighter the instant you lay fingers on them. That’s a nice touch, which means the rest of the front‑panel ‘light show’ can be left tastefully dulled. Speaking of light shows, the metering sections comprise not only the expected moving‑coil gain‑reduction meter but, either side, 10‑LED input and output level meters too, each ranging from 0 to the maximum 26dBu.

On the back, male and female XLR connectors cater for the balanced line‑level I/O and two TRS jack sockets for the external side‑chain inputs. An IEC inlet is switchable for 115V or 230V mains, and USB Type B and RJ45 Ethernet ports allow communication with the plug‑in.

Lifting the lid requires reveals neat PCBs, populated by a combination of SMDs and through‑hole components. The business end of the compression circuitry is classic SSL, with THAT Corporation’s THAT2181 chips used for the gain reduction and in the detector circuit. These chips aren’t inexpensive, and some ‘SSLish’ designs cut costs here: the better designs, including ngBusComp, use four in parallel in the signal path, helping to keep the noise floor low. 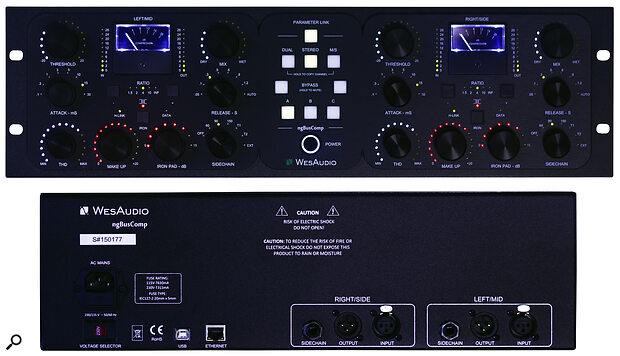 The ngBusComp has two separate analogue channels, which can be configured as L‑R, M‑S or dual mono, and the digital controls can be linked and unlinked at the push of a button.

The front‑panel’s biggest giveaway that this is more than a clone is not the additional functions, but that there’s a separate control set for each channel, with each laid out identically from left to right. Between the two sit some backlit buttons, some of which have a secondary press‑and‑hold action. Uppermost is the Parameter Link button, with three more beneath to configure the compressor as a Dual (mono), (L‑R) Stereo or M‑S (stereo) device.

When Parameter Link is engaged, each control operates on both channels, LEDs lighting on both accordingly. Linked changes are relative to the existing settings, rather than one channel forcing the other to its position. You can also copy one channel’s settings to the other: press and hold the Dual button, wait for it to blink, and press the M‑S button to copy from channel 1 to 2, and vice versa for 2 to 1. Holding a touch‑sensitive encoder for both channels simultaneously temporarily disables parameter linking. It’s a neat system, and the sort of feature that makes reading the detailed PDF manual worthwhile.

Each channel’s Bypass button doubles as a channel mute: press to toggle the compression circuit in and out (hard‑wired bypass) or press and hold to mute the signal. Since there are only two channels, it’s possible to use the mute to solo the Left, Right, Mid or Sides channels.

Three more buttons, labelled simply A, B and C, allow saving and recall of hardware presets to compare settings: press and hold the preset you want to copy, then press to overwrite the destination. Then press to switch between them. Simple. You can store many more presets using the DAW plug‑in, of course.

Each channel’s control panel sports eight rotary encoders and three buttons. The Threshold knob does what you’d expect, and on the other side of the meter section sits a post makeup‑gain wet/dry mix control. The in/out meter LEDs show increments of 2 or 4 dB, depending on the level, and the coil meter can indicate gain reduction up to 20dB. Beneath the meter, two buttons increment the Ratio between five settings, each with status LED: 1.5, 2, 4, 10 and INF:1, the last being hard limiting. Another button engages Iron mode, of which more shortly, and either side are knobs for the attack (0.1, 0.3, 1, 3, 10, 30ms) and release (0.1, 0.3, 0.6, 0.9 and 1.2 seconds and Auto).

A side‑chain filter can be set to Off, 60, 90 or 150 Hz, or T1 or T2, the last two combining tilt EQs with high‑pass filters. That’s plenty of scope for fine‑tuning the compressor’s response, but should you need more, the last position engages the external side‑chain.

It’s not uncommon for SSL‑inspired compressors to offer ways to inject colour, but the ngBusComp takes it further than most, with two different approaches, each beautifully controllable.

It’s not uncommon for SSL‑inspired compressors to offer ways to inject colour, but the ngBusComp takes it further than most, with two different approaches, each beautifully controllable. First, a THD control introduces harmonic distortion, from 0 to 8 percent. Wes say it’s a proprietary circuit and, while I’m not sure what it does differently from other such circuits, it sounds nicely musical and offers good, precise control, making it easy to introduce anything from subtle enhancement to obvious attitude. Yet more colour is available if you engage Iron mode. A red LED indicates when you’ve done so, and LED rings around the two associated knobs turn from the usual green‑tinged yellow to red. Iron mode puts the makeup gain stage before the Carnhill output transformer, and introduces a pad (15dB in 1dB steps) after it, so you can drive the transformer into saturation without the levels getting silly.

It’s worth noting that the makeup gain operates only on the wet signal and the pad only applies in Iron mode. So if Iron isn’t engaged and you want to change the wet/dry mix without affecting the overall level, you’ll need to juggle this with the makeup gain (instant comparisons are still possible using the presets). Another slight limitation is highlighted in the manual: in M‑S mode, you can’t use different Iron settings on the M and S channels, as the signal is converted to L‑R before the output. You could use a separate M‑S encoder/decoder and configure the compressor in dual mono, though.

The ngBusComp’s stand‑out feature is that it can be controlled by a plug‑in: you can save and recall settings with your projects and even use automation. And the execution is excellent — it’s easily the best, slickest integration of plug‑in and analogue hardware that I’ve seen. Whether you control the plug‑in from a mouse, touchscreen or using automation, it just gets on with the job with a minimum of fuss.

The installer was a 350MB download for my Windows 10 system. You can specify which plug‑in formats you want installed (Mac/Windows; VST2/3, AU and AAX plug‑ins; 32‑ or 64‑bit, where applicable) but, slightly frustratingly, can’t specify which individual plug‑ins are installed; you get one for every device in the ng range. The VST3 64‑bit plug‑in (curiously, categorised by Cubase as an EQ!) and USB driver occupied just under 170MB. Installing the driver necessitates a reboot, after which the software loads automatically and prompts you to check for firmware updates.

The plug‑in communicates bi-directionally with the hardware controls, and you have the choice of USB or Ethernet connection.

Communication with the computer can be via USB or Ethernet, as you prefer. USB is marginally easier to set up but that realistically means placing the ngBusComp within 5m of your computer. With Ethernet, that limitation is removed, and gives you the option of connecting to a router, for a wired or wireless link with your computer. (The steps for setting up the Ethernet link are described clearly in the manual.) Once connected, you fire up your DAW session, instantiate the plug‑in, and select the hardware in a drop‑down menu (you’re prompted to do so). This may seem unnecessary but it allows multiple instances to control different units. A nice touch is that there are both stereo and mono plug‑ins, and when using the ngBusComp as a dual‑mono device, you can place mono instances on different channels. Another cool feature is that when you put your finger on one of the touch‑sensitive hardware controls, even without changing it, the current value will be displayed on the GUI.

This being analogue outboard, of course, you have to hook its analogue connections up, if that’s to your interface rather than an analogue chain, and to set up the routing separately in your software, for example, using your DAW’s external I/O plug‑in. (I’d love to see USB or Thunderbolt A‑D/D‑A conversion on‑board in the future, and routing taken care of by the control plug‑in...)

The one small limitation compared with a software‑only experience is that there are inevitably some low‑level clicks if you automate certain parameters or switch between presets with radically different settings. I don’t regard this as a problem as it’s in the nature of the technology, and it’s not the sort of device you’d typically want to use in that way. But prospective users should be aware of it, nonetheless.

The excellent plug‑in integration, though, is merely the icing on this most tasty of cakes. In my decade and a half at SOS, this has to be one of the best compressors I’ve had the pleasure of trying out. It sounds great, has great technical specs, and lets you inject as much character as you desire. Along with the different channel modes, the parameter linking, the side‑chain filters and range of attack/release times, the ‘colour’ facilities make the ngBusComp incredibly versatile — it might be called a bus compressor, but it most certainly isn’t suited only to such duties, and could work beautifully in a vast range of tracking, mixing or mastering roles, with mono or stereo sources. For many prospective users, that should go a long way to justifying its price. I can’t personally justify the investment at present, but I am sad to be sending it back and it now has a place right near the top of my gear wish-list!