Described by its creator as a “weirding module”, the Atreides doesn’t do things by halves!

With his name printed on their products, Jeorge Tripps clearly wants you to know that Way Huge pedals are his designs. And why wouldn’t he? He’s been responsible for pedals as iconic as the Line 6 DL4, and his influence at Dunlop, through the Way Huge brand, has been felt for almost 15 years. 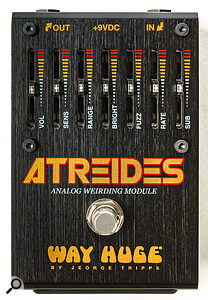 His latest creation, the Atreides “analogue weirding module”, is somewhere between a synthesizer pedal and a multi‑effects unit. Taking not a little inspiration from Electro‑Harmonix’s 1980 Mini‑Synthesizer, its name is a reference to the cult ’80s sci‑fi classic Dune, a film befitting the invitation in this pedal’s manual to “ascend the high dune and gaze upon an expanding world of musical delights full of pure imagination”. In more down‑to‑earth terms, it blends an envelope follower, a fuzz circuit, a phaser and a sub‑octave generator, and it’s capable of fashioning sounds that range from deep, synth‑fuzz beef, to phasey, wah‑infused leads.

A handful of characteristics ensure that the Atreides lives up to its “weird” strapline, for better and for worse, and it’s definitely intended more for those moments of wildness and flourishes of crazy than being left on for your entire set. 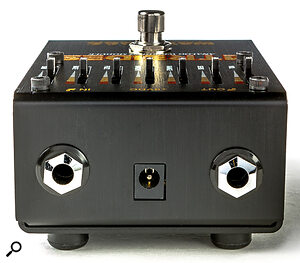 The input and output are mono, on the usual TS quarter‑inch jacks.It comes into its own when all the sliders are positioned just right to balance their respective contributions to its wild character: when you get this spot on, it has attitude, it’s off‑kilter and it’s fun. Beyond this sweet spot, though, there isn’t a huge amount of room to customise your sounds, and the overall message is clear: it’s the Atreides way or the highway!

For one thing, it doesn’t have a wet/dry mix control, which would have been so useful. And beyond a certain range, it doesn’t offer masses of control over the sound. The leftmost Volume slider has zero headroom, so goes straight from ‘off’ to heavily distorted; and while its slider is incredibly sensitive up to about halfway, it’s not really sensitive enough after that point. Neither does the Fuzz slider offer any real gain control.

To my mind, it was an interesting decision to include fuzz instead of a more conventional gain control, considering how much fuzz and synth pedals already have in common. They both add thickness, distortion and subharmonics to your sound, and favour simple harmonic content. This might help to explain why, at high levels, the Fuzz slider seems simply to add brittleness more than anything else. Thankfully, this can be compensated for in part with the addition of a sub‑octave.

The closest thing to an actual tone control on the Atreides is its Brightness slider, which offers a nice EQ range, particularly given the way it compounds the effect of the filter envelope. Dial it up for a quasi‑digital distortion sound (think Queens Of The Stone Age with Mark Ronson). Or dial it down a little, crank up the fuzz and envelope sensitivity, and you’ll achieve retro‑futuristic psychedelic fuzz.

The envelope follower is excellent and, frankly, can cover a multitude of sins. Snappy, wide and articulate, its dynamic response feels very natural, whatever the setting, and its filter resonance is tuned nicely: not too harsh, not too murky. Gold star. At its highest sensitivity setting, which, oddly, is at the bottom end of the slider, and with a wide range, digging in even slightly will throw the filter wide open with a nice quack. It’s great for lead lines and show‑off solos, and with both parameters set lower it adds a subtle tone shift that reacts pleasantly to your playing.

To be honest, I’ve always been a bit suspicious of envelope followers, and have even found them a little cheesy. But in this most synthy environment this one works very well indeed, adding real character and some crucial room for expression. It also means the Atreides’ impressive sustain is usually followed by a gritty, stilted shutting of the envelope, which at best sounds like a cool, crackly, almost ripped‑speaker effect (at worst it resembles a loose connection of some sort, or a broken tube).

This segues into the potential frustration that, even with their respective sliders on zero, none of the Atreides’ individual effects can be bypassed, except for the sub‑octave (and I infer that this is likely not actually bypassed but rather too quiet to hear). Don’t get me wrong: it’s fun to be hit with a wave of thick sub, swooshing phase and envelope filtering when mixing the Atreides’ different circuits and playing them off against one another. But I dare say it would be more fun — and more versatile — if you were able to bring in different functions incrementally and in different combinations. It also means that you can never escape the residual sounds of the envelope being triggered by minor bumps against the body of your guitar, for example, or by muted string movements registering on the pickups.

If there’s one function I could have done without on this pedal it’s the phaser. It definitely has a sweet spot, at around three‑quarters up, and I really enjoyed the sound that resulted from pairing it at this rate with a relatively sensitive, wide‑ranging envelope. But any higher than this and it feeds back, and to my ears unattractively so. Using an internal trim pot, you can attenuate the phaser feedback, which is helpful, though I’d have much preferred this to be on the exterior and, better still, for it to be replaced by the option to adjust the phaser’s depth.

At a low rate, the stages don’t feel particularly smooth or deep, an issue that is possibly accentuated by its interaction with the envelope follower, and another reason why bypass options would have been useful. I almost wonder if this a case of attempting too much — although I must stress that, as with so many other aspects of the Atreides, the whole equation carries an unmistakable glitchy, mangled charm. Emblematic of this is the sub‑octave generator. This interacts with the Atreides’ other circuits to produce various unpredictable characteristics that aren’t shared by conventional octave shifters; it hops between harmonics in curious ways. A second under‑the‑hood control toggles between one‑ and two‑octave intervals, which is useful given that this pedal behaves very differently depending on which register in which you play.

It’s definitely intended for moments of wildness and flourishes of crazy.

If you’ve read this far, you’ll have that the Atreides has its limitations. Many potential users would probably expect there to be much more distinction between the different functions, and more versatility overall, in a stompbox costing this much. But perhaps I’m overthinking it? All of the Atreides’ functions are available individually in a litany of separate pedals, which you could set up in different configurations if that’s what you want. But could you set them up to sound quite like the Atreides? I suspect not, and further, that Jeorge Tripps is very much aware of that. For this pedal it’s a case of switch on, stomp and strap in for a wild journey across the galactic desert.

A deliberately oddball stompbox that will divide opinion, the Atreides is a unique sound‑mangling tool.