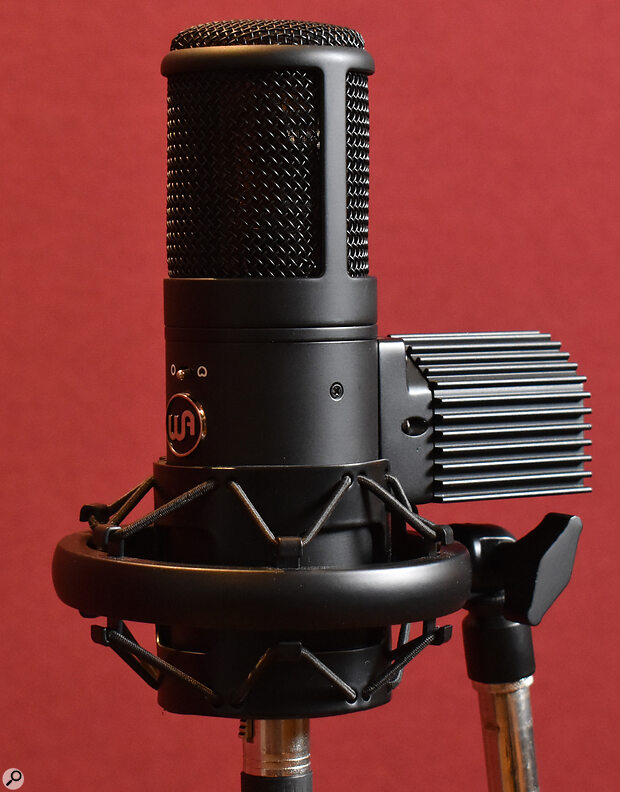 In perhaps their most ambitious project yet, Warm Audio’s latest microphone tackles the legendary Sony C‑800G.

I’ve had some great experiences with Warm Audio mics recently, and while reviewing their latest interpretation of a classic German tube mic for Sound On Sound a few months ago, I couldn’t help but wonder if there was anything left for them in the fantasy mic locker to tackle. The answer to that was obviously yes, and I was pleasantly surprised when I peeked inside the sleek black mic case that arrived at my studio for review...

The Sony C800G is a curious, perhaps even unique beast in that despite not being a ‘vintage’ design (it was released in 1992), it holds an almost mythical status in engineering circles — and has an eye‑watering price tag to match. This Japanese mic is still technically available to buy new off the shelf, but they don’t seem to be in great supply and the price of used models has rocketed in the last few years to well past the £$10,000 mark. This tells you how easy (or not) it is to get hold of one! New or secondhand, the price is still well outside what most home recordists or small studio owners can justify spending on a single microphone.

It’s debatable if any mic is worth these kinds of sums, of course, but I’ve used a C800G on a few sessions over the years and it is a fantastic‑sounding microphone. Known for its bright but smooth sound, it’s often associated with pop and rap productions. If you work in those genres and with a certain calibre of artist it can even be a necessity, and is certainly a good asset to have in your studio’s mic collection.

Warm Audio aren’t the first company to visit the unusual‑looking design of the C800G though. I was impressed with the Golden Age Premier GA‑800G I reviewed last year (www.soundonsound.com/reviews/golden-age-premier-ga-800g), but despite it feeling and sounding very authentic, its price was still going to be a significant barrier for many. Belgian company ZP Microphones’ take on the Sony C800G is also still priced at the high end of the market, though unlike either the Warm Audio or Golden Age Premier models, it’s a solid‑state microphone and so doesn’t have the characteristic heatsink. Hugh Robjohns reviewed the ZP800G in October 2021’s issue of Sound On Sound.

As is their way, Warm Audio have attempted to shake things up and bring the sound of this studio classic into the realms of reality for many more engineers, and I was very intrigued to see if it could deliver the sound that I associate with one of the strangest‑looking and best‑sounding microphones that money can buy.

The designers of the Sony C800G were given a ‘no compromise’ brief to create the highest‑performance microphone possible. The appearance was not an issue and, apart from the price, the most distinctive feature of the C800G is the large heatsink that protrudes from the rear of the microphone. This is an integral part of the design: the heatsink dissipates the heat generated by the valve in the mic’s casing, which ensures a higher signal‑to‑noise ratio than other tube‑based designs, as well as extending the valve’s life. The valve is mounted in an aluminium case with a cooling chip attached to the bottom; this allows the heat to be transferred to the large external aluminium‑alloy heatsink, and from there into the air surrounding it. It’s not a subtle design feature by any means, but is symbolic of the original ethos behind the design. This is a mic to impress the ears and not the eyes!

I’ve reviewed several Warm audio releases over the last few years and I’ve occasionally given them a bit of a hard time in the looks and accessories department. With the WA‑8000, however, there is nothing to grumble about: the review mic arrived in an impressive hardcase housing the mic itself, a shockmount, power supply and cabling, all of which look and feel very professional. The microphone looks very similar to its inspiration, albeit noticeably smaller. The heatsink is around half the size of the original’s, and Warm Audio founder Bryce Young explained to me that they wanted to try and bring the heatsink down to a more practical size whilst still achieving the enhanced signal‑to‑noise ratio.

Apparently, Warm Audio found that most of the heat given off by a C800G was dissipated from only half of its heatsink, and so made the decision to make theirs smaller. They did, however, take the extra precaution of increasing the thickness of the metal alloy material below where the tube is mounted. The result is a slightly less unusual‑looking mic, although I did notice that the heatsink got a little hotter to the touch after being left on for a few hours than I recall with the original. It’s safe to assume that this has been thoroughly tested, as Warm Audio do production runs in the thousands — which is a big part of how they achieve their prices.

These relatively large production runs also help overcome the challenge of sourcing what can sometimes be quite esoteric components, such as tubes. The WA‑8000 uses a French military NOS 6AU6, while elsewhere the unit employs a Lundahl‑made replica of the transformer used in the original C800G, a K67‑style capsule (again much like the original), and a Gotham Swiss 7‑pin XLR cable.

My first chance to use the WA‑8000 was on a vocal recording session with a female artist I was working with for the first time. After making sure she was on board with a little time spent experimenting, I set up a couple of different mic options to find a good fit for her voice. My client immediately liked how the WA‑8000 sounded on her voice, and I was impressed with the familiar bright but smooth‑sounding vocal that I was hearing in the control room. We worked on four jazz/funk‑style songs during that session, and used the WA‑8000 for two of the songs, while preferring the fuller sound of a U47‑style mic on the other tracks.

My client immediately liked how the WA‑8000 sounded on her voice, and I was impressed with the familiar bright but smooth‑sounding vocal that I was hearing in the control room.

The next session was with a male singer I’ve worked with a lot, and whose voice I know can be a bit sibilant around the 8kHz range. I was curious to hear how the bright‑sounding WA‑8000 would handle this challenge, and was pleasantly surprised with how well it suited his voice. That element to his voice didn’t suddenly disappear, but felt softer and generally more just a natural part of his vocal sound.

On another male singer I’ve worked with a lot, I again felt immediately comfortable using the WA‑8000, particularly the way it seemed to ‘frame’ his voice, which has a lot going on around the 2‑3 kHz range. Having extra information higher up the frequency range seemed to make this less prominent — although the restrained proximity effect did little to add any low‑frequency authority to his voice.

On that last issue, it can feel like this style of mic is lacking in the bottom end at the tracking stage, but its tight, consistent low end is one of the reasons it is so well regarded. Testing the mic outside the pace of a real‑world session revealed how the WA‑8000 successfully captured this characteristic of the original. I got one of the guys at the studio to talk into the mic at varying distances, and the authoritative low‑frequency part of his voice remained remarkably consistent. You can find audio examples from all of these sessions later in this article.

In an ideal world, I would be able to report to you how the WA‑8000 directly compared to the original but, like most SOS readers, I don’t have a C800G sitting in my mic collection. I have used the original before, however, and I found that the WA‑8000 captured more than enough of that mic’s essence. Judging this new release on its own merits I found it to be an excellent‑sounding vocal mic that gave a usefully different perspective to other microphones in my collection, including a U87 and a U47‑style mic.

The headline feature of both the Sony and the Warm Audio mics is their ability to sound bright whilst still adding the subtle smoothness of a good valve microphone. I’ve talked exclusively about this new release in the context of recording vocals, but I also found myself using it on acoustic guitar with good results, and you would find plenty of other uses for it when not recording vocals. As a self‑confessed gear snob, it’s taken a while for Warm Audio to win me over but, as with the last two microphones of theirs that I’ve reviewed, the WA‑8000 does an excellent job of bringing the sound of a studio classic within reach of the masses.

Check out the SoundCloud MP3 files here for convenience, but best if you download the ZIP file of hi‑res WAV audio examples, using the link below, and audition them in your own DAW.

The audio files here accompany my review of the Warm Audio WA‑8000 large‑diaphragm capacitor microphone. I've provided a few examples of some different vocals, along with a male voiceover highlighting how the mic reacts with the artist at different distances from the capsule. I've also included a couple of examples of how the WA‑8000 fared on an acoustic guitar. For all examples, I used the pre‑amps in my Audient ASP8024 console with no additional processing. Unless stated, the mic was in its Cardioid polar pattern.

An example of how the WA‑8000 sounded on a male singer whose voice can be quite sibilant.

An example of another male voice.

An example of a male voiceover with the artist positioned three inches from the microphone.

The same voiceover artist but positioned 1 foot from the microphone.

The same voice at a distance of two feet. Despite it obviously sounding more distant, it's impressive how the bottom end of his voice is still captured.

The WA‑8000 was positioned around six inches from the guitar's sixth fret.

In the same position but using the omnidirectional polar pattern.

Warm Audio continue to push the boundaries on price versus performance with this convincing‑sounding take on a classic studio vocal microphone.