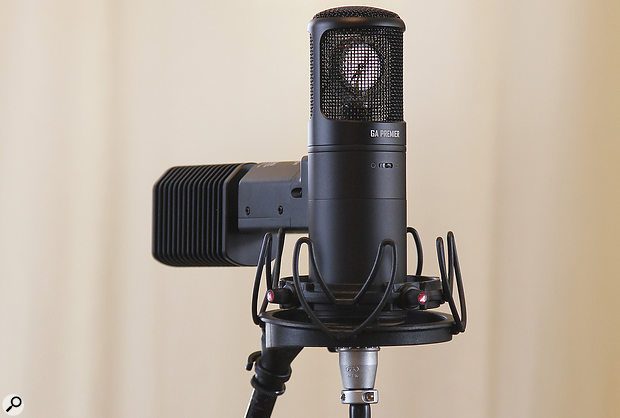 The Sony C‑800G is among the greatest vocal mics ever made, but getting hold of one has never been easy. Enter Golden Age, and their faithful recreation...

It's been 15 years since Golden Age Project released their first product, the Pre‑73 mic preamp. During that time, the Swedish company have steadily built a reputation for reimagining high-end outboard and microphones at dramatically more affordable prices than the originals. In recent years, however, they've introduced a more upmarket range of products, under the name Golden Age Premier. This range has seen them combine premium components with hand-built construction, as well as styling and accessories that are a great deal closer to those of their inspirations. This is reflected in a heavier price tag than their Project range, but they still come in significantly cheaper than the original vintage products. They've certainly not been shy with taking on some heavyweight designs under the new branding, and I was impressed with their take on the U47 when I reviewed the GA-47 in SOS November 2018.

Recreating iconic German microphones is a well-trodden path these days, but the company's latest offering sees them taking on a more recent Japanese valve design, and one of the more curious of the 'fantasy' microphones. Curious not only in the looks department but also in the fact that it's a very expensive mic, yet not one most people would describe as 'vintage'.

Launched in 1992, the Sony C‑800G valve capacitor microphone is still available new today, although it's a little unclear whether it's actually in production or if distributors are just holding existing stock. Either way, it's one of the most expensive mics available, and even if you are in a position to pay close to £$10,000 to buy a one new, it might prove difficult: electronic devices sold in the European Union have to be compliant with current ROHS legislation, and the C‑800G is not.

Apart from the price, the most distinctive feature of the C‑800G is the large heatsink that protrudes from the rear of the microphone. This is no gimmick, and Golden Age say that when they were experimenting with how to recreate the sound of the original, they found it was an integral part of the design. The heat generated by the valve in the mic's casing is dissipated by something called a Peltier device, which ensures a higher signal–to–noise ratio than other tube-based designs. The valve is mounted in an aluminium casing with a cooling chip attached to the bottom; this allows the heat to be transferred to the large external aluminium–alloy heatsink, and then dissipate into the air surrounding the microphone. It's not a subtle design feature by any means but the original designers were following a 'no comprise' brief, creating a performance-focused microphone that did not aim to look like anything else.

Golden Age are, to my knowledge, the first company to create such a faithful version of this famous mic and its original specs — and this is reflected in the price, of course. There are inevitably a few differences, but in the mic itself you'll find the same French 6AU6A tube, and the circuitry is identical to the original. They did, however, take the opportunity to upgrade the material choice for the circuit board itself, from epoxy to a (much more expensive) Rogers ceramic version. This, they claim, sounded better in blind listening tests. Other than that, the power supply is where the most differences can be found, as GA decided to use a solid-state design (the original used a valve), again based on listening tests and long-term reliability.

The microphone ships in a sleek and sturdy hard case that holds the mic itself, all the cabling and the shockmount. There's no room for the power supply, however, which may be a minor inconvenience to more mobile engineers, but I can see why they choose to keep the hard case a more manageable size. The whole package — case and power supply — does come in a cardboard carry case that you could keep and use again for remote recording sessions if needed.

The microphone's distinctive heatsink can make it a little tricky to mount, but Golden Age have included a good–quality Rycote shockmount that does about as well as any mic clip could at holding the mic in place. It's been a little while since I used an original C‑800G but the feel and styling of the mic are very similar indeed. It perhaps feels a little smaller, and there seems to be less space below the Gigeresque heatsink into which to fit the mic in its holder. It's fine in use, however. There's not much more to say on how it looks, as the Sony was never designed to impress in the looks department! As with the original, the mic has two polar patterns — cardioid and omnidirectional — which are switchable on the mic itself. Again, like the original, no pad options are present.

The C‑800G is especially revered in pop, rap and R&B circles, partly by association (it's a favourite microphone for many well–known vocalists), and perhaps also because of a perception of exclusivity due to the substantial cost! It is, however, an excellent–sounding tube microphone that has a bright, present sound that manages to sound simultaneously smooth, glossy and 'expensive'. Based on my own previous encounters with the mic it manages to achieve this whilst also being very sympathetic to sibilance and other general harshness you might encounter when recording vocals. Quite simply, if I could afford it I would have one in my studio's collection, so I was very intrigued to see how close Golden Age have got to the original. 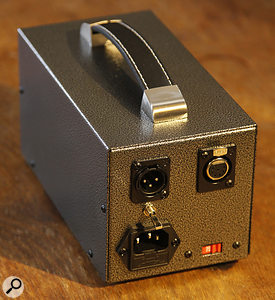 The GA-800G power supply unit.It was somewhat fortunate that — before the entire world shut down due to Covid-19 — I had a session at the studio that proved to be an excellent test. Once a year I help a local organisation record vocals for around 15 different young singers performing covers of well–known pop songs. The standard was quite mixed, but when evaluating a mic that is predominately known for vocal recording, having such a variety of voices in quick succession was very revealing.

I'll talk a little more about how close I think it sounded to the original Sony mic shortly, but first I'll say that there was not one point in the session where I was aware that the GA-800G wasn't working on a particular singer. This included a selection of both male and female singers, and the vocal chain was a Neve 1073LB preamp with a small amount of compression from a UA 1176 LN. As should be the case in a busy recording session, the gear was a non-issue — a very good sign, in my opinion.

I had to do a quick mix of all the recordings at a later date, and this was where I got a chance to properly evaluate the vocal recordings I had captured. On some of the more capable and experienced singers, it was very easy to hear why this style of mic is revered for pop music. Once a little mix treatment like compression and reverb had been measured in, the vocals sat wonderfully against the music and felt very simple to place, level-wise. As with my recollections of using the Japanese original, it almost sounded as if some of the mix work had been done for you. Very minimal EQ correction or enhancement was needed on any of the singers. De-essing was required on some of the singers, but for others, it just wasn't necessary at all. It's all about the top–end 'presence' for me with this mic, and the voicing of the GA-800G definitely has that silky, present high-end sound that I associate with the original. I didn't get a chance to try the mic on as big a variety of instruments as I would have liked, but I did use it on an acoustic guitar recording and I got a bright, open sound using it in the omnidirectional polar pattern. I have little doubt that you'd find plenty of uses for this mic when you're not recording vocals, and I'm looking forward to trying it on more acoustic instruments, guitar cabinets or as a mono drum option.

I suspect the potential market for this microphone is only going to be concerned with one thing: does it sound like the original? Based on my experience I think it sounds very close indeed, and in its own right, it's a very good–sounding microphone. The voicing seemed instantly recognisable, with that bright top end, balanced mid-range and contained bottom end. It's clean and precise–sounding but still sounds like a valve mic, and it's easy to see how this would be a great asset if you're working on musical styles where the vocal reigns supreme.

My only concern would be where it fits into the very crowded microphone market in general. Despite coming in at around a third of the price of the original, the potential outlay puts you into the realms of some very well–respected and well–known microphones that could hold their value better — if that's an important consideration. Some observers may also question how a company like Golden Age can justify the asking price, while other companies seem determined to drag the price of classic designs as low as possible. That's not really what they set out to do here, though, as this is a custom–made product that aims to get as close to the original as possible.

Many engineers and studios would like to have a C‑800G in their locker, especially for certain genres where it's seen as the real deal, but the price makes this unfeasible for many. The GA-800G makes the prospect of getting 'that' sound and look more realistic. It is still a substantial outlay, and I would always recommend trying a mic in this price range out for yourself first, but I think Golden Age Premier have produced a very credible and more affordable recreation of a strange-looking but wonderful–sounding microphone.

Golden Age Premier have gone where few others have gone before and produced a near identical recreation of the famous, and very expensive, Sony C‑800G. The price is still high, but it does bring the sound and look of the original within reach of many more engineers and studios.