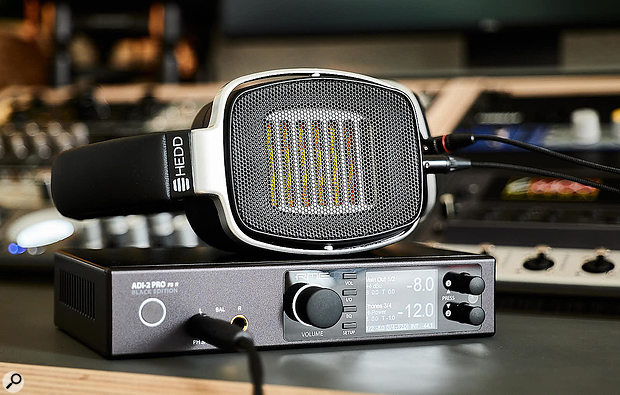 Both technically and sonically, these open-backed headphones represent a breakthrough in portable monitoring.

Innovation in music technology is usually about incremental improvement rather than radical change. It's quite unusual to be confronted with a product that is genuinely the first of its kind, but the HEDDphone is just that.

Headphones for hi-fi and studio use have typically employed one of three transducer technologies. The vast majority are like dynamic microphones in reverse, and are based on the principle of electromagnetic induction. A coil of wire surrounds a permanent magnet: current passing through the coil causes it to move relative to the magnet, and a diaphragm attached to the coil translates this motion into sound.

Much less common are electrostatic headphones, which are directly related to the capacitor microphone. In this case, the diaphragm forms part of a variable capacitor, and is set into motion through being alternately attracted to and repelled by a charged backplate.

Finally, planar magnetic or magnetostatic headphones have enjoyed a revival in recent years. As in moving-coil headphones, the motive principle is induction, but the coil is replaced by wires embedded within a flat (planar) diaphragm, which is suspended within a magnetic field.

What all of these technologies have in common is that there is a trade-off between the surface area of the diaphragm and the quality of the sound that can be achieved. Making the diaphragm larger means less displacement is required in order to generate a given sound pressure level, and this generally means lower distortion. But there is a limit to how large a headphone diaphragm can be made whilst retaining structural integrity; and, of course, there's not much point in having a diaphragm much larger than the human ear.

Enter the HEDDphone, and a fourth driver technology that — in theory at least — eliminates this compromise. Like a planar magnetic driver, the Air Motion Transformer is driven by induction, and has wires embedded in the diaphragm itself. But unlike a planar magnetic or electrostatic driver, an AMT diaphragm is not flat. Instead, it's pleated into a bellows shape, and moves perpendicular to the direction of sound radiation. In other words, electrodynamic force moves the folded material up and down rather than in and out; this motion then forces air into or out of the folds to either side.

The big plus point of this design, on paper, is that it packs a whole lot more diaphragm into a smaller space. Folding the diaphragm allows its effective surface area to be much larger than the dimensions of the AMT unit housing it, so even though the individual displacement at any point along the diaphragm is tiny, the unit as a whole can shift a lot of air.

Theoretical advantages often fall foul of practical obstacles, though, and following its invention by Oskar Heil, it has taken many years of research and development to commercialise the Air Motion Transformer. That work has been led by Klaus Heinz, first at ADAM Audio and now at HEDD, and his distinctive rectangular drivers are now a familiar sight in studio monitors. When it's employed in loudspeakers, however, the AMT driver is invariably paired with a conventional bass and/or mid-range driver. Its low mass, high efficiency and controlled directivity make it an excellent tweeter, but its natively figure‑8 radiation pattern becomes increasingly hard to manage at low frequencies.

All this means that, as far as I know, the HEDDphone is unique on two fronts. Not only are they the first ever headphones to use the Air Motion Transformer as a transducer, but they're also the first device to use a single AMT driver to cover the entire frequency range.

As is often the case with new technologies, AMT has made its debut very much at the top of the headphone market. The packaging and presentation are appropriately lavish, and removing the outer card sleeve reveals a work of precision engineering in black cardboard. This unfolds to display the HEDDphone nestling in their padded enclosure like a hippo in a particularly comfy watering hole. What it doesn't do, though, is form any sort of carrying case; the hard Pelican cases you get with high-end Audeze phones are not as stylish, but a lot more practical if you need to transport them.

Not that this will be a major issue for most HEDDphone buyers, because this isn't a pair of headphones you'd take with you on the road. They are not only expensive, but also huge — so much so that my teenage son broke down in gales of laughter the first time he saw me wearing them. Being open-backed, they radiate as much sound outwards as they do towards your ears. And although their nominal impedance of 42Ω is comparable to that of many moving-coil designs, the HEDDphone are quite a bit less efficient than most, generating only 87dB SPL for 1mW power dissipation. This means that mobile or bus-powered devices typically won't supply sufficient power to drive the HEDDphone at all loud. To achieve usable levels with unmastered programme material, you will need a mains-powered headphone amp with a decent amount of oomph. 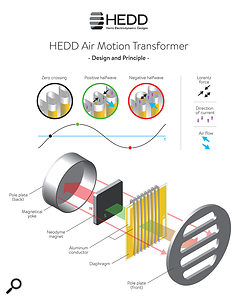 This diagram shows the construction of the HEDDphone's Air Motion Transformer driver.Perhaps as a consequence, HEDD disdain the humble mini-jack connector. The supplied cable has mini-XLRs which attach to the base of each earcup. The wires emerging from these are covered in a semi-rigid braided screen, twist together after an appropriate distance, and terminate in a fixed quarter-inch jack plug at the other end.

As I've already mentioned, the earcups to which this cable attaches are very large indeed. They are noticeably bigger even than those of the Audeze LCD‑X and related models, and presumably for the same reason: to position the drivers further away from the ear. The HEDDphone are also heavy, at 718g. Thanks to the deep rectangular pads, which are faced with very soft leather, I found them surprisingly comfortable, and was happy to use them for long periods, but they're not the sort of headphones that you forget you're wearing.

The price of entry to the new technology used in the HEDDphone is therefore high, both literally and metaphorically. The only way they could justify that price would be to sound spectacularly good — and, to cut straight to the point, they do.

The experience of auditioning music on HEDDphone reminded me of some of the shootouts I've done in mastering studios, where the monitoring is simultaneously revealing and forgiving. That might sound an odd comment, but it contrasts with a monitor system such as NS10s, which reveal anomalies by sounding horrible. If your mix has too much bass, or a honky mid-range, or problematic sibilance, or unwanted distortion, the HEDDphone will also make that clear — but they won't do so by exaggerating the problem, or making your music unlistenable. Which, obviously, is a good thing, since you're going to need to do a lot more listening to fix whatever the problem was in the first place.

The forensic level of insight they provide into the strengths and weaknesses of a vocal sound is pretty remarkable.

Unlike most headphones, moreover, the HEDDphone are revealing not only of frequency balance but of level and dynamics issues. In my experience, this can be very hard to get right on headphones, and I've sometimes spent hours honing what I thought was a finely crafted balance, only to put it up on speakers and find that it's completely out of whack. The HEDDphone are a much more trustworthy tool in this respect, making it far easier to form reliable judgements about, say, the level of the lead vocal in relation to the rest of the track, or the amount of compression to apply to the drum bus.

I suspect it's no coincidence that I've only ever encountered this speaker-like characteristic on headphones with this sort of large earcup design that positions the drivers further from the ears. Like the high-end Audeze models, the HEDDphone make lesser headphones sound strangely compressed and two-dimensional. In comparison with something like the Audeze LCD‑X, the HEDDphone perhaps don't deliver the same 'thump' on rock drums, but their presentation of things like hi-hats, tambourines and other hand percussion is remarkable.

HEDD Of The Pack

One concern with new technologies in monitoring is that no matter how good these may be, they diverge from what everyone else is using, which can compromise translation. My only real reservation about some planar magnetic headphones, for example, is that the treble has a different character from typical moving-coil phones. It's possible to overlook issues that can become problematic on consumer systems because the planar designs don't have the same weaknesses that can be triggered, especially at the top end.

If there are any such issues with the HEDDphone, I didn't encounter them. There's neither too little nor too much top end here, while the bass is deep, clear and very even. HEDD don't offer any specifications for distortion, but the impression is of a very clean monitoring system, which allows the listener to discern very clearly any non-linearities in the source material. In fact, the biggest praise I can give them is to say that they don't seem to have 'a sound', and I can't really imagine feeling the need to correct the frequency response using Sonarworks or similar software. In particular, the forensic level of insight they provide into the strengths and weaknesses of a vocal sound is pretty remarkable.

For the same money, of course, you could actually buy a very decent loudspeaker-based monitoring system, and for many people, the idea of spending this much on a pair of headphones will never be realistic. But in a world where more music is now consumed on headphones, there is an argument for taking headphone monitoring as seriously as loudspeaker listening. That's especially the case for mastering engineers, who are the final gatekeepers standing between our music and the Beats By Dre-equipped masses. Not everyone is willing or able to make this sort of investment, but if you do, I think you'll notice the difference between HEDDphone and more affordable cans, and that this difference makes them a more valuable tool for mixing and mastering.

The HEDDphone aren't cheap, but they have real value as a high-end monitoring tool in the studio. If you're in the market for a state-of-the-art pair of headphones for mixing or mastering applications, you need to hear these.