A Price On Your Head

Is it crazy to spend a four-figure sum on a pair of headphones? 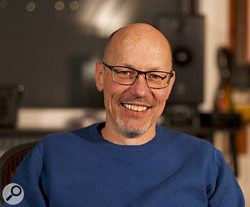 SOS Editor In Chief Sam InglisIf you'd asked me that question 10 years ago, I'm sure I'd have said yes. After all, aren't they just extravagant marketing exercises, designed to part hi‑fi enthusiasts from their cash? Isn't the top end of that market all about the smartest boxes, the most retro braided cables and the softest leather cushions, not about actual sound quality?

Turns out it's not so simple. In that time, I've reviewed several pairs of thousand-pounddollar cans. In some cases, they arguably just represent a slightly more refined take on the same manufacturer's lower-cost offerings. Others, though, really do offer something that isn't available at 'normal' prices. The HEDD Audio HEDDphones reviewed in this issue are a case in point, as are Audeze's LCD-series phones. They make music more enjoyable to listen to, but they are also better monitoring tools that can help mixing and mastering engineers do their job more effectively. If, that is, engineers buy into the idea of doing their job on headphones at all.

Headphones are now the primary means by which music is consumed. Some say this makes it desirable to mix and master on phones, too. It's a seductive argument, but not one that convinces everyone. My own experience is that a mix that sounds good on speakers nearly always translates well to headphone listening, but a mix that sounds fine on headphones can sound completely out of whack on speakers. Headphones are revealing of detailed faults, but when it comes to putting across the bigger picture, the loudspeaker is still king.

We might not all like mixing on headphones, but the available tools for doing so have never been better.

Responsible engineers have always checked mixes on multiple systems, including both speakers and headphones. But what may be changing is the balance between the two. In years gone by, headphone listening was a low priority, and you might spend 90 percent of your time working on NS10s, with the occasional blast on the main speakers or a single Auratone. Today's engineers often seem to be spending much more time on headphones, even if they eventually put the finishing touches to their work on speakers.

This isn't always through choice, or because they want to give headphone listeners the best possible experience. More often, it's a move that's forced upon us through circumstances. There are techniques that can help us make that move, and in this month's SOS feature 'Mixing On Headphones', you can find out how big-name engineers are putting these techniques into practice. But if you're one of the many engineers for whom headphones are becoming a key part of the mixing process, perhaps it does make sense to buy the best ones you can.

High-end headphones that might have been an extravagance in the past are now a core part of the mixing engineer's toolkit. And that goes for related products, too, such as headphone amps and software such as dSONIQ's Realphones, reviewed in this issue, which is designed to improve the experience of monitoring on cans. We might not all like mixing on headphones, but the available tools for doing so have never been better.