For the first product in their new Premier range, Golden Age are tackling perhaps the most famous studio mic of them all.

When the BBC evaluated the then-new Neumann U47 in 1953, they described it as a “less costly version” of the same manufacturer’s flagship M49. It’s a description that will raise a hollow laugh with anyone who follows current second-hand prices: a mic that was once available to the BBC for £100 now routinely commands five-figure sums. Small wonder, then, that there is a flourishing market for modern-day clones and tributes. 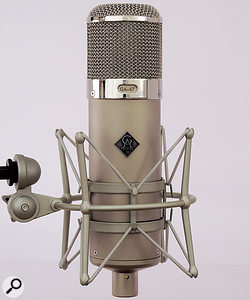 However, a part of the reason why the original U47 is still sought-after is that it is almost uniquely difficult to reproduce today. The problem lies not with the M7 and K47 capsules used in different iterations of the U47, which are still manufactured by Microtech Gefell and Neumann, respectively. The issue, rather, is with the impedance converter, a metal-cased miniature pentode valve called the VF14 that was used well outside its intended design parameters in the U47’s preamp circuitry. The VF14 was only ever manufactured by one company, Telefunken, in relatively small quantities, and only about a third of the VF14s produced met Neumann’s standards for use in microphones. VF14 manufacture ceased in 1954, and by the early ’60s, Neumann themselves were having such difficulty obtaining usable examples that they were forced to discontinue the U47 and its sibling the U48.

Numerous alternatives have been tried, but almost all of them require changes to the circuit, and it’s almost universally agreed that there is something special about the VF14 valve and the circuit Neumann designed around it that is intrinsic to the magic of this celebrated microphone, and which cannot be replicated with other valves. Given that the tooling and expertise needed to produce new VF14s is long since gone, this makes it almost impossible to create a true clone of the U47 today.

Of course, this minor detail hasn’t stopped modern-day manufacturers from producing large cylindrical valve mics with the numerals 4 and 7 in the model name. Latest to do so are Golden Age, who will be well known to SOS readers for the affordable recreations of classic outboard hardware in their Project line. The GA-47 is the first member of a new Golden Age Premier product range, designed to occupy a rather higher price band than their other gear and to showcase higher standards of build quality.

Sensibly, Golden Age describe the GA-47 as being “inspired by” the Neumann classic rather than as an exact recreation. It uses a new-old-stock Telefunken EF800 valve, and, like the original, offers the choice of cardioid and omni polar patterns, but these are switched on the power supply rather than the mic itself. Internally, it is hand-made using point-to-point wiring and high-quality components, including a custom recreation of the BV8 output transformer employed in the U47. 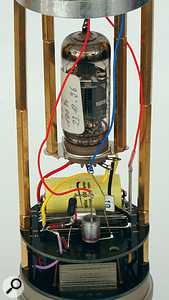 The GA-47 uses a Telefunken EF800 valve, and a custom-made recreation of the original U47’s BV8 output transformer.The review model arrived at my studio in a large tweed-style case with the microphone, power supply, mic cradle and necessary cables neatly housed inside. The tweed case perhaps pushes the meaning of the word ‘premier’ a little, although it absolutely fulfils its basic requirement of keeping things safe. Within the case, however, the all-important microphone is housed in a very nice velvet-lined wooden box, and the mic itself looks and feels like a high-quality tool that has that feeling of substance you get with classic valve microphones. Likewise, the power supply and mic cradle both feel reassuringly expensive. Without labouring the point, the look and feel of the GA47 are important, given that there are so many alternatives available at a variety of prices, including modelling mics. Using this style of microphone should be inspiring for an artist — and engineer! — so what they look like, and how they feel to set up and record with, are important. With this in mind, I think it’s perhaps telling that I, and the other engineers who use my studio, were all keen to try the mic on upcoming recording sessions as soon as it arrived.

I tend to do the majority of my recording at my own studio, where I have a choice of preamps and compressors available to track with. My first session with the GA-47, however, was on a remote recording session with a female singer working on some fairly dynamic pop-style material. When I have to rely on the onboard preamps on my RME Babyface, with no additional outboard, it can often feel a little sterile before any mix processing. When I got the files back to the studio, however, I was really pleased with the vocals, which had that rounded, almost slightly compressed quality that I associate with a high-quality tube microphone or outboard. I’ve recorded the singer in question before and I was impressed with how the GA-47 slightly exaggerated the lower range of her voice and was flattering in the top end without being harsh. With just a touch of carefully judged high-pass EQ and compression, the vocal sat effortlessly in the track.

I had the chance to record a number of singers with the mic during the review period and it was a recurring theme that I seemingly needed to do less compression at the recording stage to get things sounding how I like before any additional mixing. I suspect this is less to do with dynamic control and more about getting a full, rounded recording at the source.

On the majority of the male vocalists I used the mic on, the GA-47 felt like it was firmly on my side, and I’d go as far as saying it was something close to the perfect tonal fit in some cases. On one singer, however, it seemed to exaggerate some heavy plosive sounds in his voice to the degree that I went and swapped the mic out straight away. This fits in with my perceptions of what a U47 should sound like, as it isn’t a guaranteed winner on every singer. When it does work, though, you begin to understand why the original is so revered. Not to the extent to what people now pay for them, I would add, but they can support a voice just when it’s needed and, as mentioned, it seems to make a vocal just sit in a mix in a strangely familiar way. They can help fill out a thinner voice and the top end is very sympathetic if things start to get overly bright or harsh. Vocals can also feel like they have extra depth and, if you do need to get stuck in with EQ when mixing, recordings seem to be able to ‘take’ any processing that is required with ease.

Many users will be evaluating this style of mic primarily for vocal recordings, but I also used the GA-47 on a few acoustic guitar recordings, and I again liked how the mic offered a rounded quality to any part that wasn’t too fast or technical, and that might better suit a small-diaphragmed alternative. Considering the price, it’s possibly indulgent, but I’ve always found U47s make great room mics for drum tracking or full live-band sessions, and the GA-47 also worked really well in these types of applications, both as a mono drum mic overhead and more of a room ambience-style option. I was also able to try it in omni mode on a cello recording, where it delivered excellent results.

I’ve used a few vintage Neumann U47s before, and it’s important to make the point that it’s a little futile to try and compare precisely how faithful any ‘inspired’ products are to the originals. Even authentic examples can sound quite different from one another, due to the many variables involved in maintaining and repairing a piece of equipment that can be over 70 years old! This makes the job of a reviewer a little tricky, but I always felt with the GA-47 that I was using a microphone that had the right flavour, and met my own perceptions of what a U47 should sound like. Also, although I don’t have a vintage German tube mic in my studio’s mic locker, I do have a number of other very good options available; and despite this, I was always very happy to use the GA-47 on a number of sessions, not just because I needed to review it, but because it offered a high-quality alternative to what I had available.

Forgetting about any comparisons, I think this microphone provides good value for your money: it’s a great, natural-sounding tube microphone, and it will look the part if you care about that kind of thing. There are, of course, a large number of U47-style mics available now, at a variety of prices, but I would absolutely put the GA-47 on my shortlist if I were looking towards the more affordable end of that particular market.

There’s a number of '47-style mics available now, including the Warm Audio WA47 and Pearlman TM47. Further up the price range are options from Flea, Bock, Wunder Audio and, of course, Telefunken.

From their new Premier line, Golden Age have produced a very credible option in the increasingly crowded market of Neumann U47-‘inspired’ microphones. The look and build quality impressed, and it produced excellent results on a number of singers and instruments during the review period.