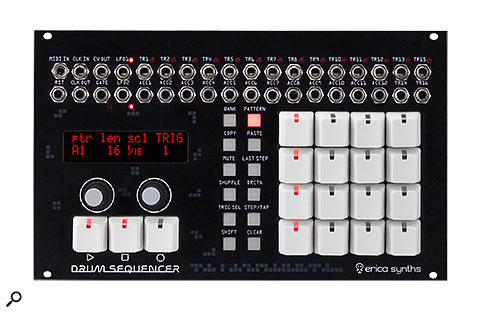 The Erica Synths Drum Sequencer is a drum brain optimised for live performance with plenty of capacity for all your favourite patterns. At its heart is a 16-track X0X trigger sequencer with a 17th track added for CV and gate duties. Accent is available to 12 of the trigger tracks in the form of an additional output, its effect entirely dependant on the modules you pick. Erica Synths have some suggestions for these, which we’ll be checking out soon.

Keeping the manual handy at first, the process of pattern creation shouldn’t take long to master. A dozen small buttons keep the menu system shallow and friendly, with a couple of push-type encoders and a display taking care of navigation and value updates. The right-hand 4x4 pad block has the highest-quality keys, used for sequence and track selection, trigger and accent entry; plus they can be employed for tapping in notes and fills. Overall, the layout makes a compact and workable alternative to a line of 16 buttons and LEDs.

If organising a case to combine the Drum Sequencer with suitable percussion, you’d probably aim to put the drum modules directly above. This would keep the trigger connections short and avoid ‘cable dangle’ over the screen and encoders. Having contemplated all the trigger and accent outputs, you’ll already know this machine is a connectivity feast. A Reset input joins the analogue clock I/O, with MIDI Clock received via mini-jack (an adaptor is supplied). Finally, a pair of menu-bound LFOs provide two sync’able or free-running CV sources, ready to be directed to suitable drum parameters.

A Drum Sequencer pattern therefore consists of triggers, accents, note information and LFO parameters. Trouncing traditional drum machine expectations, each track can have a unique length, running direction, time base and shuffle value. Or, if you prefer, you can adjust these values for all tracks globally. Even the allocation of a random or ping-pong direction to a single track can add instant, effort-free cleverness to your patterns — and since any track can be between one and 64 steps long, there’s much to try out. With so many options, you’ll be glad there are 16 banks of 16 patterns in which to store your killer grooves.

In general, the Drum Sequencer behaves as you’d expect, with only the transport keys throwing a curve ball or two. For example, the stop key also acts as continue — something to bear in mind if you’re used to different implementations. Hitting play always resets playback to the start of the pattern, which provides another tool to sharpen up your performances. Finally, the record key is not used to capture the notes you play but to save the current pattern — it flashes as soon as you make any edit.

Note entry begins as easily as selecting the track (and the bar, if the track exceeds 16 steps) then enabling triggers. If accents are required for the track, the keys toggle between three possible states, with accented steps having the brightest LEDs for clarity. Should you start developing a one-bar pattern and later wish to extend it to four, there’s currently no way of automatically filling it. This is an omission Erica are aware of and plan to address in a future update. At least copying tracks and patterns is plain sailing, even if seamless copy to a new blank location isn’t yet catered for.

As an alternative to X0X entry, you can tap in notes by playing the keypad. Perhaps the most impressive programming feature is the ability to drill down to individual steps and set the likelihood of a voice to trigger, or set a pattern for it to play, for example once every few bars. Also on this ‘drill down’ page, you can introduce per-step pushes or delays using a simple micro-timing offset, which is enough to create your own personal flavour of swing. Lastly, each step can be fast-retriggered — up to an insanely zippy 128th timing division!

Programming the CV/gate track offers the same tricks with the addition of note entry and a variable gate length. At first, it didn’t feel quite as slick as dealing with triggers, but I soon realised that note entry is cool enough in its own way. Selecting a step then spinning an encoder works surprisingly well — for short patterns anyway. It’s assisted by a number of preset scales that keep the notes from straying, although the stray notes are often the best! There’s no choice of scale root included, nor is there currently a way to slide between notes, but you can get some way towards the latter by varying their length or shifting them using micro-timing. After not fully getting it, I quickly came to see the CV/gate track as indispensable — indeed I’d kill for a second one! Even if you have regular sequencing covered elsewhere, the CV track can serve as a programmable voltage source to supplement the onboard LFOs.

Simple pattern chains are created by holding down the first and then the last pattern key. With dedicated buttons for mute, direction, last step and so on, most of what you need for performance is up front and obvious. I did struggle for a while trying to work out how to use the repeat/fill function — until I learned the manual’s instructions were incorrect. Those fills are worth sussing out — the Akai MPC-style note repetition can be a fantastic pattern enhancer. And if you like what you hear, the fills can be recorded.

I relished turning most of my modular into a drum machine and can see huge potential in a complete Eurorack-based percussion rig. There’s no denying it would cost significantly more than most stand-alone drum machines, but the prospect of voltage control over your own personal drum armoury is pretty exciting. Perhaps the main omission (compared to modern drum machines anyway) is any form of velocity recording, but the accent implementation fits the classic model and works well enough for most purposes.

As the Drum Sequencer is well-suited to improvisation, I doubt many will miss a Song Mode (I don’t). All the regular sync options are catered for, the keypad feels superb, and despite a couple of cryptic operations to memorise, the learning curve is gentle. Any drum machine that offers control over track length and direction, note probability, fills, retriggers and swing is already well worth checking out. When you factor in the generous track count and pattern pool, there’s no doubt this is a serious and beautifully conceived Eurorack drum brain.