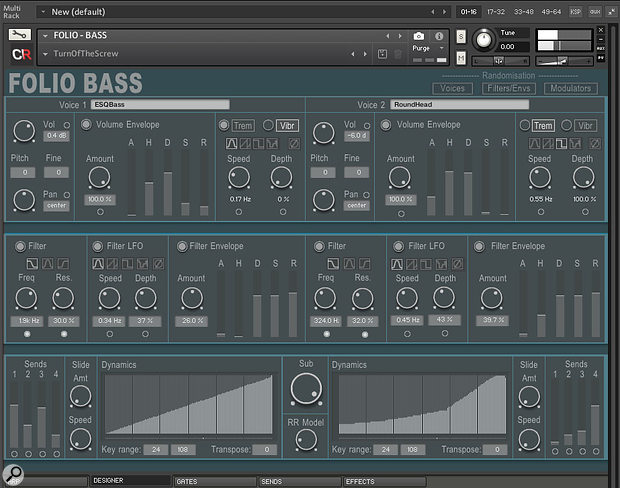 Outside the obvious big-hitter sample library/virtual instrument developers, there are a whole host of smaller, indie-style developers doing their best to compete, either by offering something unique or accessibly priced. In Folio Bass, developers Channel Robot (a name new to me, but with an established product line of modestly-priced virtual instruments available through the Kontakt Hub portal) have attempted a bit of both.

Yes, on the surface, Folio Bass is ‘just’ a two-voice ROMpler-based bass synth for Kontakt (it requires the full version of Kontakt 5.8 or later) and, yes, the UI is perhaps not the most colourful of visual experiences. However, aside from an impressive, and very useable, collection of 300 core source samples from which you can build your sounds, Folio Bass has some rather cool features hidden away on its Gate and Arp pages.

I’ll get to those in a moment, but let’s start with the basics on the Designer page, shown above. Visually, this is divided into three horizontal rows of controls, but you can also consider it as a left/right vertical set where identical sets of controls are split between Voice A and Voice B. For each voice, you get a nicely organised browser to select from the core samples. These are derived from a range of original sources, including some classic analogue synths, and all recorded using a combination of tape and valve equipment to ensure plenty of analogue warmth. There is nearly 6GB of sample content in total.

As well as voice selection, the top-most row of controls provides independent volume, pitch, amp envelope, tremolo and vibrato options for each voice. The middle row provides a fairly standard set of filter options with various filter types, a filter LFO and envelope, while the bottom row provides four sends from each voice to the master effects section found on the Sends page. Each voice also has four of its own effects slots with a good range of effects options provided, and these can be configured via the Effects page. The effects found here include EQ, high-, low- and band-pass filters, vowel, formant, amp and cab simulation, various distortion and overdrive types, tape saturation, and some modulation effects. The Designer page is rounded out by an interesting Slide (like, but not identical to, note glide) option for each voice and a sub oscillator that you can blend in to taste. 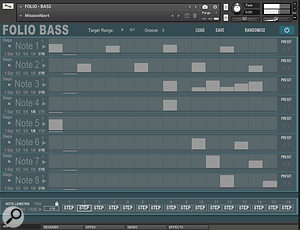 Folio Bass has some rather cool features hidden away on its Gate and Arp pages.So far, so normal(ish). However, it’s when you flip to either the Gates or Arp pages that things get a little more unusual. The Gates page offers two ‘gates’ per voice. In fact, these are actually step-based pattern grids that you can use to modulate various synth parameters. They can do ‘gate’ because one of the parameters you can control is volume, but other options include various filters, drive, lo-fi and a rotary effect. The potential here is impressive and, as each gate can have both different tempo and step settings, there is all sorts of complex sound shaping available.

The Arp page is equally quirky. The arpeggiator provides individual pattern lanes for up to eight notes, with the lowest note controlled by the lane for Note 1, the second lowest note by Note 2, etc. These assignments will change if you add notes to those currently playing. What’s more, amongst other options such as pan and transpose, each lane can have a different step count (between one and 16 steps) so you can get all sorts of very interesting polyrhythmic arpeggio effects. Yes, it does take a little while to adjust to the slightly different approach to constructing an arpeggio, but it is very creative. It’s perhaps a shame that more of the Snapshot presets don’t make obvious use of this element of the engine, and perhaps that a few more arpeggiator presets are not included. Maybe this will be something worth considering for the first major update?

And how does this all sound? Well, pretty impressive actually and, in terms of both sonics and variety, Folio Bass punches well above the weight its price tag suggests. As the name suggests, there are some beefy bass tones to be had amongst the Snapshot presets, but don’t let that stop you knocking out some chords or lead lines either. It also seemed to be pretty solid from a technical perspective during my own testing via Kontakt within Cubase 9.5.

I’ve used prettier virtual instruments, but Folio Bass sounds great and offers some very interesting sound-design and performance options that are not too intimidating to the new user. Well worth auditioning if you are happy to dip into the indie developer marketplace.