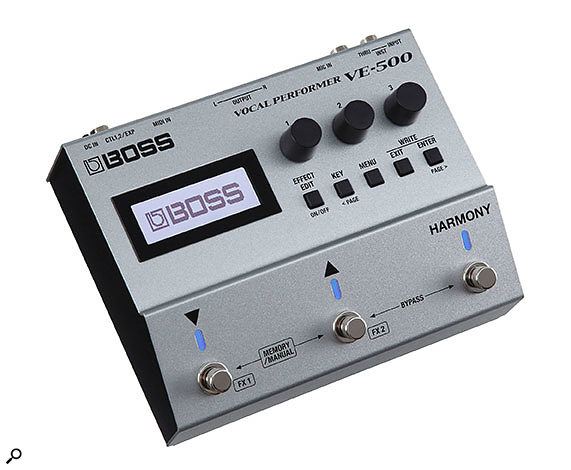 This neat box of tricks offers a wide range of vocal effects, as well as the ability to track the pitch of a guitar or MIDI input.

Vocal processing hardware tends to be thought of mainly in the context of live performance, but often it can also be very attractive to the studio user, offering treatments that go far beyond the conventional. The latest in Boss’s 500 range of floor-mounted processors (we reviewed the RV-500 reverb last month), the VE-500 is just such a device. It’s designed to offer a full toolkit for vocal processing that includes numerous effects, auto-harmony, pitch-correction and vocal-transformation effects that encompass vocoding, ring modulation, radio speakers and beyond. It can construct harmonies of up to three parts, either using a specific scale or from a chordal input from a guitar or other instrument, and there’s also a basic but very usable looper that offers one minute of mono recording (or 30 seconds of stereo, if you prefer).

Housed in a compact three-footswitch metal case, the VE-500 has a balanced mic input on an XLR with switchable phantom power and provides a stereo output, also on balanced XLRs, with the provision of a ground-lift switch. Power comes from the included external adaptor though a good pedalboard supply capable of adequate current can also drive it.

The instrument input and Thru sockets allow the generated harmonies to adapt to the chords played on a guitar, while also sending the unprocessed guitar signal on to its amp.For the instrument input there’s a quarter-inch jack, and a second jack passes on the Thru signal to feed your amp. Should you have space left on your pedalboard, a Ctl jack can accept an external switch to extend the unit’s control capabilities. A USB port allows for software updates, the sending and receiving of audio and the use of the free software editor for Mac or Windows computers. A five-pin MIDI In port can be used to drive an internal multi-waveform synth for use as a carrier source for the vocoder, as well as for remote parameter control.

As with the RV-500, the front-panel controls are modest in number but allow access to all necessary parameters via a hierarchical menu. A monochrome, back-lit LCD shows editing data and patch names and up to 99 setups can be stored as user presets. While the menu structure is logical enough, serious editing is made much easier using the aforementioned software editor, in which tabbed pages access different control sections as well as the system settings.

The first two footswitches can be used to step up or down through the presets, or to turn specific effects blocks on and off. Pressing switches two and three together bypasses the unit, while switch three on its own brings in the harmony effect. If required, the switches may be assigned to different functions, stored with each patch.

The effect section is set up as four main blocks, designated Enhance, Lead FX, Multi FX and Reverb. There are also two further Reverb blocks, which may be deployed in series or parallel, and these offer a range of reverb types and a basic delay with feedback and hi/lo filtering. In fact, there are a number of routing options that allow the effects blocks to be split between the main vocal path and the added harmony vocals in various ways: there are three routing options for the main effects blocks, described as series, parallel or Para+Ser. The first two are self-explanatory, but under the last option blocks one and two run in parallel and are then combined, before feeding a series combination of the last two blocks.

The instrument input is read by a chord detector section, the information from which is used to generate harmonies in Auto mode. The harmony section can work from a fixed scale alone (major or natural minor), the instrument input alone or a hybrid mode that combines both a scale and the instrument input. There’s no facility to process the guitar input other than as a vocoder source — it routes to the Thru jack without feeding into the main audio path. A mixer section then allows the user to combine any USB audio input with the dry and effected signals and can feed its output to both the XLRs and the USB audio output.

First in the chain, the Enhance section offers compression, de-essing and harmonic enhancement, all with very simple controls — essentially an amount fader for each function. An output from this section can be taken directly to the mixer to enhance the dry sound before the addition of effects. You’ll also find a parametric EQ with two mid sections flanked by high- and low-cut shelving filters with adjustable frequencies.

All four of the main FX Blocks offer the same multiple-choice of delay, reverb, all the common modulation effects, and some less obvious ones including Lo-fi, Slicer, Granular (more of a static flange effect or buzzy delay), Isolator, Roll (a triggered repeat), Ring mod, T’wah, Distortion, Vibrato and Radio emulation. Isolator splits the vocal into three audio bands then applies a stepper effect that can be triggered via tempo. The rotary effect is worthy of special mention and includes adjustment of the speed rise and fall times when you switch between slow and fast. The ring modulator has its own variable frequency oscillator as its second input so there’s no shortage of alien and robotic voices to be had here. And if you want to turn a snippet of sound into a soundscape, there’s a Freeze function. 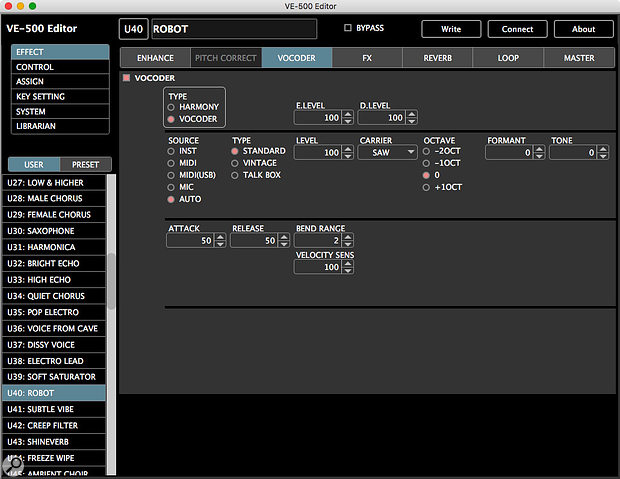 A vocoder patch on the control/editor software. Both true vocoder effects, with a MIDI input, and vocoder-style effects, which require no input other than the vocal mic, are available.

The reverbs and delays are all we’d expect from the Roland/Boss stable and cover pretty much every vocal treatment you might need, even if you’re emulating a choir singing in a huge cathedral. All the ‘trick’ sounds do as you’d expect too, though taste dictates that most of these will typically be best used sparingly — a complete song with ring modulated or radio vocals could easily get a bit tiring.

The harmony section is at its most impressive when following the chords of the instrument input, but it can also produce perfectly capable results using scale mode, as long as the song’s melody doesn’t wander off in a strange direction. It’s also possible to set your own harmony interval for each note if you have something specific in mind. And the harmonies can also be set to follow a MIDI input from a keyboard or sequencer.

As with all such devices, the harmonies do have a slightly artificial quality to them, which is partly down to the side-effects of pitch-shifting. But I’ve heard worse, and as long as they sit behind the main vocal and not on top of it, they can sound extremely effective and believable. Furthermore, the harmony section is also extremely adept at setting up pseudo double-tracking and vocal-thickening effects using the Unison and detuning options.

As I mentioned in passing, MIDI may be used to control the inbuilt vocoder, and this shows up as an alternative to harmony generation in the Harmony section. Vintage, modern and talkbox characters are available. The result obtained using MIDI (via USB or MIDI socket) or a guitar input sound very similar — that’s not surprising, since the guitar signal is converted into a sawtooth/square synth sound or distorted to increase its harmonic content. In these modes, the vocoder sounds just as you’d expect a good vocoder to sound, with excellent clarity of diction and with three distinct characters. There’s also an octave feature, and a Mic mode that requires no further input — you just sing and you get a vocoder-flavoured output.

No modern vocal processor would be complete without pitch-correction, and here you can select from four different strengths that go from natural to ‘hard tune’ robotic. Correction can be either to a specific key or chromatic, and when set to Natural it tightens things nicely without sounding obvious.

As a live processor, the VE-500 provides a very convenient solution to calling up exactly the right effects for each song, and if you have a rhythm guitar or keyboard and feed it into the instrument input, harmonies tumble forth like magic.

In the studio, if you just want EQ, compression, reverb and delay you’ll probably have a perfectly good set of tools to do those things already — but if you want something a bit out of the ordinary, particularly the vocoder or more ‘out-there’ vocal effects, the VE-500 starts to make a lot more sense. It’s harmony creation abilities could come in very useful too, as could its excellent double-tracking emulations. Given that this pedal costs no more than a couple of plug-ins, then, there really is a lot to like.

The main competitors in vocal processing are Digitech and TC Electronic, though you’ll also find the vocoding facilities on a number of synths from the likes of Novation and Korg.

The VE-500 is a practical proposition for recreating specific vocal sounds when live on stage, but its MIDI and USB capabilities mean that it also integrates very well with a computer recording setup.