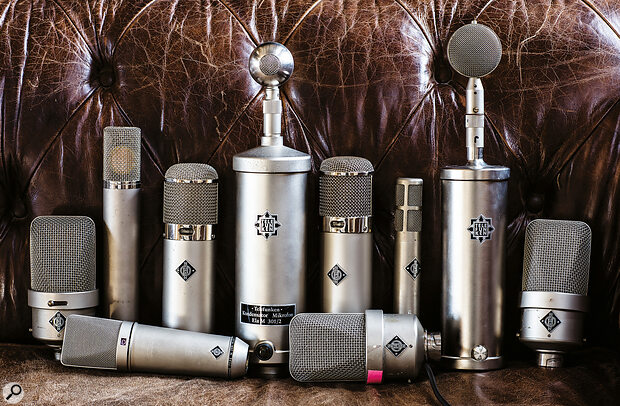 Most of us will only dream of owning a collection of vintage valve mics such as this!Photo: Hannes Bieger

Everyone loves classic microphones, but few of us can afford them! We survey the hundreds of modern recreations on the market, and explain what to look for when you’re choosing one for your studio.

Now that original Neumann and AKG valve microphones have become unaffordable, modern manufacturers have stepped in to fill the gap, offering clones and vintage‑inspired models at all price levels. In this article I’ll take four of the most iconic studio microphones, and explain what to look for in mics that claim to be authentic copies. How close to the sound of these revered classics can you hope to get without spending a five‑figure sum? 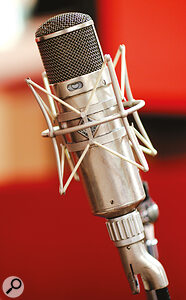 Neumann’s U47 is probably the most widely copied valve mic of all.The most famous of all studio microphones, the U47 is famed for its rich, thick, detailed midrange. Only 5000 or so U47s were made, and original examples can fetch five‑figure sums, so it’s no wonder that modern manufacturers have tried to recapture its magic. Have they succeeded, and is there any reason to spend thousands on a ‘boutique’ recreation when you can buy a mic with ’47’ in the name for well under £1000$1000?

Three of the most important elements that contribute to the sound of a capacitor microphone are the capsule, the electronics and the transformer. In the case of the U47, the capsule is arguably the easiest of the three to recreate. The M7 and K47 capsules used at different times in the original production run are both still made, by Microtech Gefell and Neumann Berlin respectively, and affordable Chinese copies are also widely available. Pretty much every mic that is “inspired by” the U47 thus uses a derivative of the original capsule design, though of course the accuracy of these can be quite variable.

The U47’s BV08 transformer was developed by Neumann from a design created by the West German state broadcaster, and is quite intricate. Budget U47 copies typically use generic transformers, but boutique manufacturers such as AMI and Beezneez have produced painstaking copies of the real thing. The real stumbling block is the impedance converter. The U47 used a unique and long unobtainable valve called the VF14, operated way outside its design parameters. There is no other valve that can be straightforwardly substituted, so in effect, it’s not realistic to market a U47 copy where the electronics will perform exactly as they do in the original.

Arguably, then, there’s no modern mic that can be considered a perfect clone of the U47. But there are many, many mics that claim to offer the same sound character. At the most affordable end of the spectrum, you’ll find mics that pair a K47‑style capsule with generic valve electronics. It would be optimistic to expect them to sound identical to a U47, but there’s no reason they can’t sound good or offer comparable warmth, at least when used on‑axis for close‑miked vocals. Warm Audio’s WA‑47, for example, features a custom K47‑style capsule and an AMI transformer, paired with an ECC83 valve, while Advanced Audio’s CM‑47 uses a 6072A valve and a capsule that’s described as a hybrid between the K47 and later K67.

Further up market, Golden Age Premier’s GA‑47 features a custom replica of the BV8 transformer and an EF800 valve. Again, the capsule employed is a K47/K67 hybrid. Telefunken USA’s TF47 is a U47‑inspired mic that uses their “historically accurate” BV8, paired with a K47‑style capsule and a circuit based around the EF732 valve. Peluso’s 2247 is also marketed as a U47 recreation at around the same price, as is ADK’s Z‑47.

The next step up in price gives you access to American, Australian or European‑made capsules, usually handmade in...