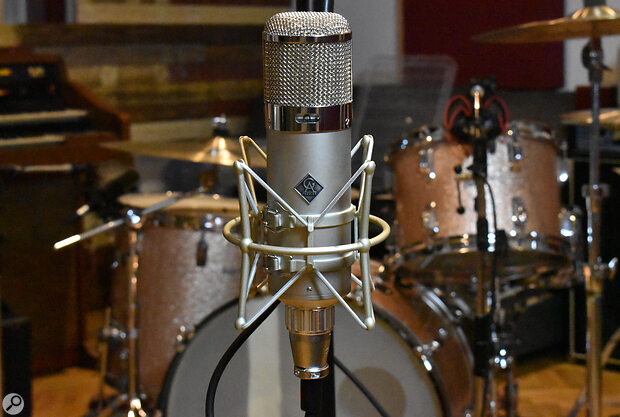 Four years ago, Golden Age released an impressive homage to Neumann’s classic U47. And they’ve been improving it ever since...

I reviewed the Golden Age Premier GA‑47 back in SOS November 2018, and found lots to like. It wasn’t a cheap mic, and its release, under the then‑new Premier sub‑brand, marked a change in direction for a company who had built their reputation on offering the sound of classic gear at dramatically lower prices. But the original U47 is not a straightforward mic to recreate authentically and, as we know, original examples now go for frankly laughable sums of money. Since the GA‑47’s release four years ago, Golden Age have continued to develop it, and now offer three different tributes to Neumann’s studio classic, at three different price points: the GA‑47 MkII, and two GA‑47 XT (‘Extended’) models. For review they sent their top‑of‑the‑line model, which Golden Age say competes with the very best U47 clones available on the market.

The headline feature of the Extended models is their removable capsule heads, which can be swapped out for two different capsule flavours. The M7‑style capsule head (as reviewed here) provides what GA describe as a darker, more ‘vintage’ sound, while the other variant uses a K67‑style capsule, derived from the design used in the Neumann U67 and U87Ai, which offers a brighter, more ‘modern’ sound. Both capsules offer cardioid and omni polar patterns. Golden Age also say that the mic body and capsule heads are interchangeable with those of original U47s, which, given the price, age and scarcity of the originals, could be a significant feature. The M7 capsule used here is a more refined offering than that used in the standard GA‑47 MkII model, and more expensive to produce, while the microphone body also features changes to the internal electronics such as using a Rogers circuit board, point‑to‑point wiring and general refinements that incrementally bring the mic closer to its rarified inspiration.

One of the things that’s so revered about the U47 is its low end, and the GA‑47XT M7 seemed to work very well at presenting and filling out bass on a voice. However, it was the way it brought forward the 2‑5 kHz range on vocals that really caught my attention. It didn’t work with every singer I tried it on — it was sometimes too much — but I was impressed at how well it flattered that ‘presence’ part of a voice without introducing extra sibilance or harshness. It also produced a very lifelike representation of an acoustic guitar, and sounded excellent as a mono drum room mic.

I’ve been lucky enough to review a number of boutique microphones for SOS in recent years and I’m always struck by the passion and commitment that goes into bringing mics of this calibre out into the world. Golden Age’s latest release is a great example of this, and the fact that they have continued to put so much care and effort into refining and improving an already successful model shows that they’re not resting on their laurels.

I was impressed at how well it flattered that ‘presence’ part of a voice without introducing extra sibilance or harshness.

Although it’s not the first Golden Age product to have a more elevated price tag, the GA‑47 XT‑M7 is significantly more costly than we would normally associate with this brand. This level of quality doesn’t come cheap, though, and it is competitively priced compared to other U47 models by the likes of Flea, and certainly compared to the crazy world of vintage microphones. I found the XT‑M7 to be a very convincing U47‑style microphone indeed, and whilst I would always recommend trying out a mic for yourself in this price range, it should definitely be on your shortlist if you’re looking for a quality vintage‑flavoured mic.

The MP3 audio files below provide a few audio examples of how this high-end recreation of a classic microphone sounded in my studio. For all the examples the mic was running through the preamps on my Audient ASP8024 with no processing. For quality auditioning in your own DAW, download the 24-bit hi-res files in the ZIP:

I managed to grab SOS contributor Jules Harding to provide this vocal performance which gives a good example of how the XT-M7 handled a dynamic male vocal.

One of my favourite uses for this mic during the review period was as a mono drum overhead. With the mic positioned above my head looking down towards the kick and the snare drum, here's a short example of me trying to remember how to play the drums.

I liked using the XT-47 positioned very close (3-4 inches) to an acoustic guitar in its Omnidirectional polar pattern. It seemed to cope well with dynamic changes in volume and here's a brief example.

Lastly, Jules Harding again providing an example of how the mic sounded for a male spoken voice. He was positioned about 4-5 inches away from the mic.

Though it’s not cheap, Golden Age Premier’s latest take on the Neumann classic offers a convincingly characterful sound and stands up well against other clones.