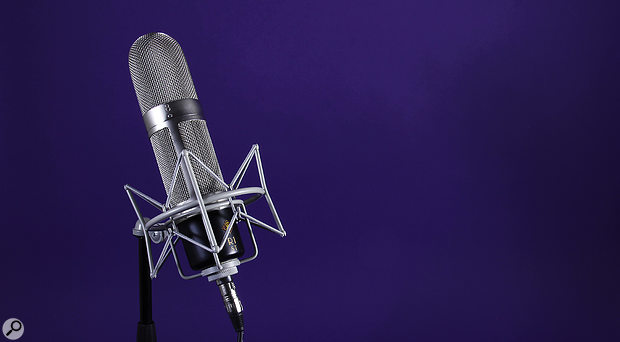 Stereo ribbon mics can be enormously useful in the studio, and Golden Age’s new R1ST is a fine example at an accessible price.

The R1 is Golden Age’s version of a Chinese-made ribbon microphone which is also available, with some variations, under other brand names such as Nady and Shinybox. It has evidently proved popular over the years, since the original passive version has been superseded by an improved MkII, and joined by two active versions, with solid-state and valve electronics respectively. The latest addition to the line-up is the R1ST: a stereo ribbon microphone which is, in effect, two R1 motors mounted at a fixed 90-degree mutual angle for Blumlein or Mid-Sides recording.

Golden Age claim a frequency response of 30Hz to 18kHz (±3dB) for the R1ST, though no chart is available. It is a passive microphone with sensitivity specified at 2.5mV/Pa; for reference, that’s about 4dB hotter than an SM57, and the same as is quoted for the Royer SF-12 and AEA R88. However, at 600Ω, its nominal output impedance is around double that of those more expensive rivals, and Golden Age recommend that it be connected to a preamp offering an input impedance of 3kΩ or greater. The preamps built into many audio interfaces and affordable mixers are more often around 1.5kΩ, and they may struggle to provide the gain necessary for typical distance-recording applications with the R1ST. Even with my Focusrite ISA828 on its highest input impedance setting, I found that the real-world output from the R1ST was about 3dB lower than that of a Royer SF‑12.

When the postman drops off the R1ST you could be forgiven for thinking you’d mistakenly ordered a new cooker. It comes in a truly enormous hard case, styled to look somewhat like the Fender amps of old. As well as the mic itself, this contains a fabric sheath to protect it from stray zephyrs, and a cable with a five‑pin XLR connector at either end. A small passive splitter box provides the separate outputs from the top and bottom ribbon motors, and a bulky cradle suspension screws to the base of the mic. The mic itself is 330mm long and, with the shockmount attached, weighs a hefty 1.56kg. 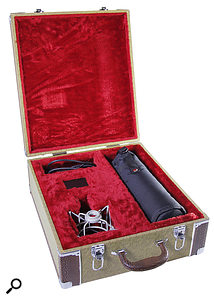 The mic, along with its five-pin XLR cable, stereo breakout box, shockmount and protective pouch, ship in a generously sized carry case.It all looks very smart at a client’s-eye distance, but on closer inspection, it’s fairly obvious why the R1ST costs less than a Royer or AEA stereo mic. The mesh windscreen flexes disconcertingly under a gentle touch, the metalwork is thin and light, the generic connectors feel cheap, and the screw-on ring that attaches the suspension is hard to engage with its thread. The case is smart but feels insubstantial, and removing the suspension from its little hidey-hole invariably causes the elastic to ping off. If the mic was a fixture in my studio I’d probably choose to leave it permanently up, with the sheath for protection, rather than wrestle with the mount every time I wanted to use it.

Fortunately, there’s another reason why I’d probably leave it permanently occupying a mic stand: it’s a very useful microphone. Single-point stereo microphones are underrated tools, in my experience, and although they can’t rival a spaced pair for lushness and spaciousness, the precision, coherence and mono compatibility you get from a coincident stereo recording are often more useful at mixdown time.

I’d guess that in many studios, a stereo ribbon mic would see most duty as a room mic for drum kits, and this is a role that the R1ST fulfils with aplomb. Once you get beyond the distance where proximity effect kicks in, it has all the mid-range bite you’d hope for, adding liveliness to a kit recording without overemphasising the cymbals in a way that capacitor mics can do. It’s also more than capable on sources such as guitar amps, as you’d expect, where positioning it with one element pointing directly at the speaker and the other at 90 degrees gives you the option of tracking either a straight mono sound, or Mid-Sides stereo to add a sense of space.

The R1ST is likewise perfectly usable for general-purpose stereo capture, provided you have preamps that can take the strain, though it is not quite as classy as some stereo mics in this role. For instance, the Royer SF‑12 excels on piano, an instrument on which it manages to sound both smooth and airy. In comparison, the R1ST actually demonstrated greater extension at either end of the frequency range, but its subjective sound was a touch on the hard side.

Budget permitting, devotees of Blumlein recording for orchestras and the like might prefer something more in the Royer vein — not only because of its more refined sound, but because the R1ST is a big and heavy mic that will inevitably be quite visually intrusive, and requires an appropriately massive stand. That said, for typical studio applications, this is a mic that has a lot going for it. You might not know that you need a stereo ribbon mic, but once you’ve tried one, you might wonder how you managed without!

Golden Age’s stereo ribbon mic has plenty to commend it, offering an affordable point of entry for those interested in Blumlein and Mid-Sides recording.