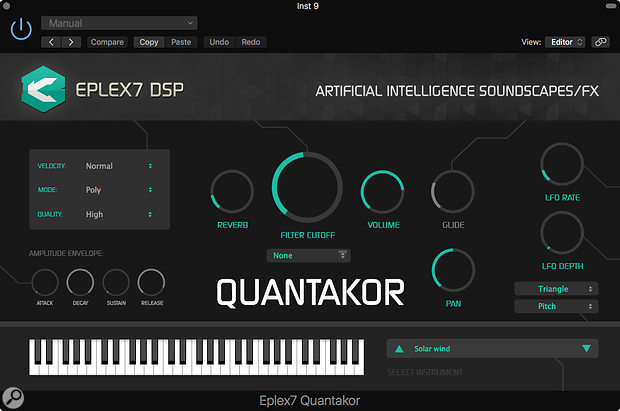 Quantakor is a super-simple instrument plug-in that plays back sample-based audio from a preset library, which can then be modified in quite basic ways using envelope shapers, LFO, filter and reverb. What may be less simple is the way the sounds were created in the first place: the designers claim that artificial intelligence was combined with morphing, neuronal synthesis and complex resynthesis, much of it using their own algorithms. Certainly the sounds are complex and intriguing. Some are drone-like, some are hits and zaps, and others have a rhythmic element, but all are one-shot sounds — there’s no looping, so unless retriggered, they fade out after 10 seconds or so of playback at the maximum decay time. The abstract, quasi-organic nature of the sounds makes them suitable for use in experimental music, film and TV soundtracks, ambient music, chillout and so on, and most seem to work best when played monophonically.

While the premise may be simple, the sounds are multisampled and can be used over several octaves with no compromise in sound quality, though the ones containing rhythmic elements do change tempo as you change notes. The LFO section offers a choice of Triangle, Sine, Saw, Square or Exponent shapes, and can be used to modulate pitch, expression and pan with variable depth and rate. There’s also a switchable low/high-pass filter with a cutoff control, reverb and an ADSR envelope shaper, though I could never get anything other than the Sustain knob to do anything to modify the envelope, even after doing a full re-install.

Play modes are polyphonic, monophonic or legato, the latter enabling the glide (portamento) function. Disk streaming is used to save on RAM use and the plug-in also commands a commendably low CPU overhead. The price is excellent and within the reach of everyone, and the learning curve is so flat you can walk it in your carpet slippers, so the real question is whether this plug-in can offer any useful sounds for the style of music you want to create. If you are a singer-songwriter, you can probably live without it, but if you work in any of the genres listed earlier, it is definitely worth a closer look. Not being able to play continuous drones and soundscapes is a bit of limitation, as is the only partially functioning ADSR — but if you really do need them to go on longer, you can always record them as audio and then loop them in your DAW and apply fade-ins using automation. I tried that on a couple of the sounds and had no problem getting a smooth result.