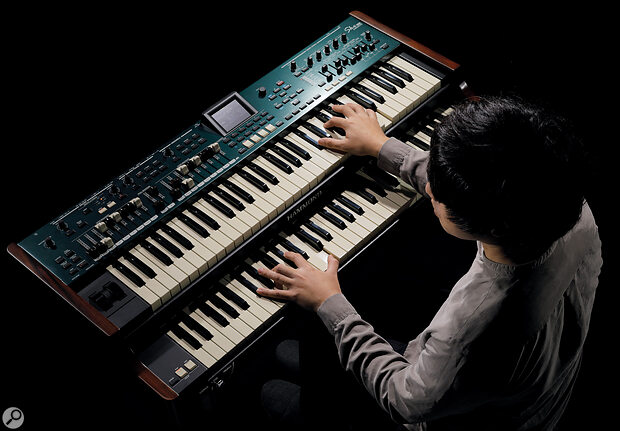 The Hammond SKX Pro may not be cheap, but boy do you get a lot for your money.

Thirty years ago, Hammond were at the forefront of the rush to create digital emulations of their own tonewheel organs played through Leslie speakers. In 1992, I thought that the sound of the Hammond XB‑2 was great, but progress was rapid, and the pursuit of digital tonewheel perfection led me to Roland VKs, Korg CXs and BXs, Oberheim OBs, Hammond XKs and various Nords, and each (with the occasional exception) was better than the previous. So, as the newest entrant to the field, is the SKX Pro the best yet?

At roughly a metre wide and weighing 18Kg, it’s slightly larger and heavier than its predecessor, the SKX, but its revised control panel is now centred around a 320 x 240‑pixel colour display, which is a big step forward. True, it’s still small by modern standards but, with lots of controls as well as two full sets of drawbars plus pedal drawbars on the top panel, there’s no space for anything larger. Its manuals are 61‑note, semi‑weighted and velocity sensitive, but aftertouch is not supported. In my view, Hammond made a mistake here. An instrument like this deserves to be played using both hands, so what do you do when you want to perform tasks that would otherwise require that you lift your hands from the manuals? You can assign pedals, but the obvious solution is to press a bit harder on the keyboard.

It has three underlying sound generators that drive four sections: an organ with vintage Hammond, Vox, Farfisa, AceTone and pipe organ emulations; a sample‑based polysynth that provides the voices for its piano and ensemble sections; and a virtual analogue monosynth. But since the Hammond emulation will be the raison d’être of the SKX Pro for the majority of people, let’s start there...

The organ section is based upon the MTW1 system that powers the top‑of‑the‑range Hammond XK5. It is 61‑note polyphonic and offers X5/B3000 voicing as well as the expected B3, C3 and A100. Its tonewheel model is called a Virtual Tonewheel Set and, in addition to providing access to the underlying organ type and revision, it can be edited on a wheel‑by‑wheel basis, allowing you to determine the tone and leakage from each, as well as how the drawbar position affects the level of each. You can also choose which of Hammond’s pedal generation methods is used as well as the registrations and actions of the pedal drawbars. It’s fiendishly detailed, and if you have a favourite but idiosyncratic vintage organ, you can recreate it here.

The output from the Set is directed to a virtual Matching Transformer that mixes the pitches as you play them, and the output from this feeds an emulation of the scanner chorus/vibrato before being passed to the MFX1 (multi‑effects) section, an overdrive, and the MFX2 section. The signal then reaches a tone control and EQ before being fed to the Leslie speaker emulation (if used) and a reverb. If wanted, the sounds generated by the bass pedal section can bypass the chorus/vibrato and feed straight into the effects chain, or skip this too and feed into the tone control and EQ before being passed to the Leslie effect or to a dedicated ‘clean’ output.

Once you’ve chosen a preset Tonewheel Set or defined your own you can program the key click and percussion, and determine how much compression is applied as you add notes to a chord. You can also select how the virtual bus bars respond when you press a key, using the Virtual Multi Contact technology to emulate how different footages could sound at slightly different moments when playing a B3, C3 or A100. There’s even a set of Tonewheel Brake parameters. Back when I were but a lad, players would switch off valve‑based Hammonds to create downward pitch bends and on again to swoop back up to the played pitch. Depending upon the model, this could also create a dip in amplitude, and all of this can be recreated on the SKX Pro.

You can also modify the Leslie effect, choosing from various cabinets, programming the horn and rotor speeds and accelerations, determining the virtual microphone setup, and adding a dry (non‑rotating) sub‑bass should you want it. In addition, you can place the rotary effect after the reverb, which is something that I’ve been requesting from elsewhere for years. Of course, none of this description tells you how good the Hammond+Leslie emulation sounds... but it sounds VERY good.

The next organ family is that of pipe organs. I wasn’t impressed with this at first, but then I discovered how to customise the pipes, choosing from 46 ranks for each of the drawbars, adjusting their pitches and tuning, their levels, brightnesses, the position of each rank in the soundfield, how the pipes are arranged, the amount of chiff, and whether a tremulant is applied. These allowed me to create organs ranging from the smallest and flutiest chapel organs through to large instruments with strident diapasons, blaring brass and raucous mixtures. You won’t replace a full Hauptwerk setup with an SKX Pro but, if your needs are more modest, you could be very happy with this.

The SKX Pro also provides models of Vox, Farfisa and AceTone organs. The Vox emulation recreates the sine and triangle wave contributions of the Vox Continental as well as the footages and mixtures of various models. Similarly, the AceTone emulates the TOP‑7 while the Farfisa model recreates the single‑manual Compact although, in both these cases, their on/off tabs have been replaced by drawbars that progressively introduce the voices. They all have the character of their originals and, if you invoke the overdrive and EQ, you can approach the anti‑social natures of both the Vox and the Farfisa. However, Hammond missed another trick with the Farfisa model because later Compacts dropped the 4’ Piccolo, added 2+2/3’ and Brilliant tabs, and added the Multi Tone Booster tabs that generated their most aggressive and recognisable sounds. Consequently, I would still use an original Compact Duo if the music demanded it.