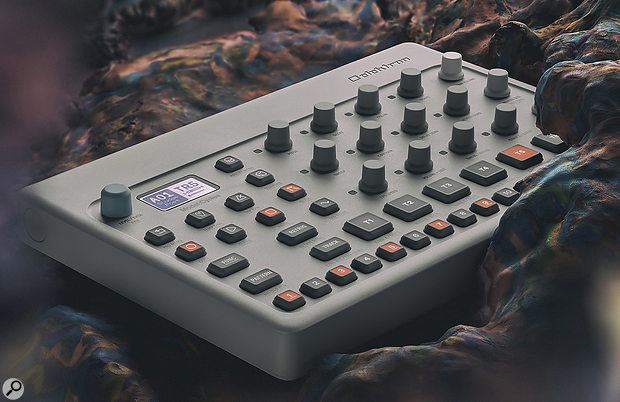 The Model:Cycles offers an easy and affordable way in to Elektron-world, and has a sound all of its own.

Cycles is Elektron's second release in their 'Model' range, joining the Model:Samples. A lazy summary would call these entry-level Elektron devices. They are certainly more affordable than other Elektron products, but there's more to them than that: they stand out in the range in terms of portability and straightforward performance control.

Model:Cycles is a focused deployment of Elektron's Digitone synth technology; the result of their sitting down to make a sequenced synth groovebox without samples. They've packaged up the already accessible FM synth engine into six ready-to-play voices, each with four predefined macro controls. Driving these is a six-track sequencer, with all the familiar features and potential found on the other Elektron boxes.

In contrast to the metal militarism of the Digitakt and Digitone cases, the Model:Cycles is slim, lightweight and plastic. It feels reasonably rugged, though, and the stubby rubberised encoders are tough and stable. The backlit buttons are small and a bit wobbly, but you get used to them. The panel takes a similar approach to the Analog RYTM in having both 16 standard-issue 'trig' step buttons and velocity-sensitive drum pads. As on the RYTM, the larger pads require a finger-bruising poke to reach high velocities, and I couldn't find an option to change the sensitivity globally.

The unit comes with a small power supply. As on the Model:Samples, there are connection points for a forthcoming Power Handle (great metal band name) which will power the unit from AA batteries and provide a handle-cum-kickstand (great folk band name). The battery port accepted the connection from the small DC battery pack that I've used to run other Elektron boxes. You can't power it from the USB port, but I noticed the Model:Cycles only needs 5 Volts, so I tried a USB-to-DC cable into the regular power port and it worked! I guess Elektron chose not to allow power via USB as it tends to cause noise problems. The USB port provides MIDI comms with your computer, and lets you use the Cycles as a stereo audio interface. Sadly, there's no Overbridge for plug‑in-based control and DAW integration. However, you can stream audio using the audio interface feature, and I like that you can choose not to include the effects. Unfortunately, I never got this to work.

The panel has a small display controlled entirely from a single push encoder. On the larger Elektron devices, all sound controls are based around screen pages. On the Models, nearly all sound-design parameters have dedicated encoders, which is fantastic. The compromise is that you have fewer parameters, and when you do need to use the screen, it's pretty fiddly.

The working structure will be familiar for Elektron users. The basic building blocks are Patterns, which store a six-track sequence, but also all sound, effect and modulation settings. Projects contain 96 patterns. There are six sound channels or tracks, each of which triggers one of the six sound types, called 'machines' in keeping with the RYTM and Octatrack. Assignment is free-form: you could have any machine on any track, and use the same type on multiple tracks. You can also parameter lock (automate) the engine selection so the sound type can change within each track per step if you like.

Though tones can be played melodically (monophonically), the Cycles is primarily set up like a drum machine. Trigs placed on the step buttons play a designated pitch, as do the performance pads. You can adjust pitch per step easily enough, though, and in live recording mode, you can capture a melodic sequence using the trig buttons as a makeshift keyboard. External keyboards can be used to record live, or to quickly enter note values into steps.

The Model:Cycles has a sound preset library, which is navigated a little awkwardly via the screen and encoder. It's organised by category, and is useful for getting an idea of the range of sounds available. Elektron devices don't tend to do Kits as a concept very well. Here, the closest thing is the ability to load a folder of six presets in one go. Saving your own kits in this format is reasonably straightforward.

But I barely touched the library, as it's so easy and so much fun to dial in your own sounds. The six sound machines in Cycles are Kick, Snare, Metal, Percussion, Tone and Chord. Each comprises an algorithm built from the 4-voice FM synth engine, along with four macro controls for adjusting key parameters. These Macros are adjusted with the Color, Shape, Sweep and Contour encoders, named vaguely enough to cover some quite different assignments within the different patches.

Round the back things are pretty simple, with a micro USB port, 3.5mm MIDI In and Out/Thru sockets and three quarter-inch sockets for audio out and headphones.

Kick can provide a typical range of electronic kick sounds with a distinctly clean and solid character, but can be stretched further into extreme industrial noise. With long decays, or with the Gate mode in the sustain hold mode, it will happily serve for 808 bass tones. Unfortunately, there's no glide!

Snare has a decent range, too, from fairly realistic to traditionally synthetic, and can do metallic clonks or tom-like tones as well. Metal is set up for hi-hats and other cymbals, which it does very nicely. With low modulation it can work for detuned melodic synth tones, too.

Percussion is best for pitched percussive sounds, from low tubs to higher clanks and plops. Tone is the most conventionally FM-like patch, with two operators that you can set a ratio and modulation amount for, and some filter and envelope control to rein it in.

The Chord algorithm is the most fun, and the one you'll probably hear on a lot of tracks in the next year or so! The two primary macros here choose a chord and which notes are played. There's a huge range of chords to choose from, from basic unison, through familiar chords, and on to exotic territory. All four FM operators are employed for the individual voices — a single encoder dials in how many, and which variation or inversion is used. Sounds complicated, but you just twiddle until it's good!

All the sounds have Pitch and Decay controls and sends to the two (sweet) Decay and Reverb effects. There's also a dedicated LFO Speed dial and a Volume + Dist knob. This latter pushes the gain into a soft saturation; overall level and pan are track settings accessed on the screen.

Beyond Decay, the only control you have over envelopes is to toggle whether sounds trigger and decay instantly, or sustain while a note is held. The only assignable modulation you have is a single LFO per track. This has suitable shapes and trigger sync'ing to be used like an envelope if necessary. LFO assignment is easy: you hold the LFO button, then turn an encoder for the parameter you wish to modulate. Keep turning to set the depth. The big limitation (or simplification if you want to be more positive) is that the LFO can only be assigned to one thing at a time. Velocity is the other available mod source, although you need to use the display to assign this.

Finally, there's a Punch button (I realised the loo-roll icon was actually a boxing glove) which adds boost and distortion to sounds. Like just about everything, this can be added to specific notes by simply holding a step and pressing the button. In this way it becomes a very effective and pleasing Accent control, over and above velocity variations.