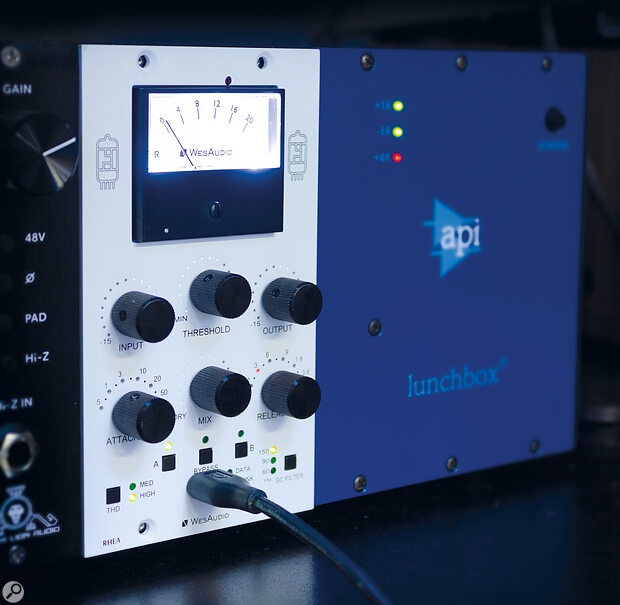 We’ve featured several Wes Audio ng500 modules in SOS and have found them all impressive, in terms not only of the digital remote control but also the analogue electronics and the build quality more generally. The Rhea, which joined the range late last year, is a stereo module which occupies two vertical slots in the 500‑series host chassis. It’s billed as a vari‑mu compressor, meaning that the valves are responsible for the gain reduction, not merely amplification. As with others in this range, it’s compatible with any VPR Alliance‑compliant 500‑series chassis, but to use the control plug‑in you must plug a USB cable (one is supplied) into the front‑panel port. A tidier option is to use Wes Audio’s Titan, a 10‑slot 500‑series rack which makes use of a small connector on the Rhea (above the standard 500‑series contacts) to cater for data transfer. All ng500 units installed in the Titan can communicate with the plug‑in over a single USB or (better for longer distances/multiple machines) Ethernet connection.

At the heart of the analogue side of things are two new‑old‑stock (NOS) Russian 6N3P dual‑triode valves. One is used in each signal path, with one half responsible for general amplification and the other gain reduction. Wes say they not only test and match both valves but do the same for the triodes in each one, to minimise ‘thumping’ and ensure consistent gain and gain reduction in both channels. 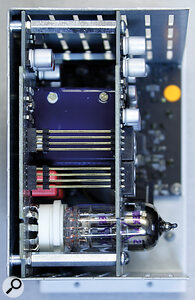 The valves, which take care of both amplification and gain reduction, are carefully matched NOS Russian 6N3P types.Unlike in vintage vari‑mus, while the gain reduction itself is performed by valves, the sidechain circuitry, which dictates when and how much gain reduction is applied, is entirely solid state. Some purists (snobs!) may scoff, but it’s an approach that’s necessary given the form factor — the Rhea already accommodates two valves and a pair of Carnhill interstage transformers, so there’s little space, and more tubes would make heat management nigh impossible. (The Rhea already runs pretty warm; you won’t want to cover the vents of the host rack!). The sidechain circuitry has, though, been designed to exhibit valve‑like behaviour.

The Rhea is a true stereo compressor, with a single set of controls governing both channels. Unlike with some other Wes processors, then, dual‑mono or Mid‑Sides operation isn’t possible, though you can use the Rhea to process one mono source (it sounds lovely on vocals and bass guitar!).

The front panel is styled like Wes’ other ng500 modules: clean‑looking, with minimal black labels on a painted white front panel and, for the most part, it’s easy to read. If viewed from above, as when the unit sits on a desktop or in a rack beneath, some labels are obscured by knobs, but you soon grow accustomed to what’s where — and there’s always the plug‑in remote control! A white backlit (perhaps a tad too bright) gain‑reduction meter dominates the upper third, and below are six knurled‑knob rotary encoders, each circled by tiny LEDs, along with a quintet of buttons and the mini USB socket. The LED indicators have been beautifully judged. The ‘background’ brightness is tastefully dulled but easy to see in pretty much any studio lighting conditions, and those for a specific control grow brighter as you make adjustments (whether via the hardware controls or the plug‑in).

While, technically speaking, the encoders all select switched settings, for some of them (Input, Threshold, Output and Mix) the steps are so tiny as to create the impression of a continuous pot. As these pseudo‑continuous controls are turned, their white LEDs change brightness, giving great, detailed visual feedback — there are 16 LEDs for these parameters, and several degrees of brightness for each. The...