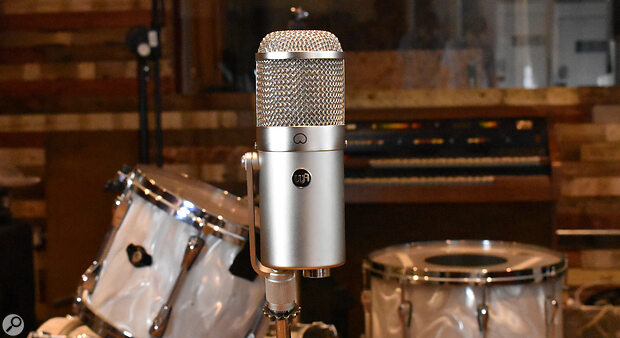 How close does Warm Audio’s FET 47 recreation get to the revered original?

Warm Audio’s latest mic is a take on a studio classic that needs little introduction. Despite being excellent for vocal and general instrument recording, the Neumann U47 FET is typically found in high‑end studios positioned in front of a kick drum or bass cabinet. Walk into any busy tracking session in a professional studio and there’s a very good chance you’ll see at least one in this role, because the U47 FET excels at capturing the low end of high‑volume sources in a natural and very usable way. The nature of this line of work means that original models can be pretty rough around the edges but, regardless of their appearance, they still fetch a handsome sum on the secondhand market. Undoubtedly encouraged by this, Neumann re‑released the microphone in 2015, and studio owners and engineers now have the choice of buying a new or a vintage model for around the same price — a price that would be hard for home recordists or small studio owners to justify. Warm Audio have, of course, built their reputation on solving this dilemma for engineers who aspire to that quality but can’t shell out thousands on a single mic, and I was looking forward to putting their version up against the real thing in my studio.

A Brief History Of A Studio Classic

The original U47 FET was released in the early 1970s and remained in production up until 1986. At the time of its introduction, microphone manufacturers were moving away from using valves and embracing the convenience and compactness of phantom‑powered, solid‑state circuitry. In what would probably be seen as sacrilege now, the U47 FET was a Neumann re‑engineering of their original valve U47, utilising the now perfected field‑effect transistor (FET) as an impedance converter. The result was a similar‑looking microphone that was capable of much higher SPL handling than the original. Unlike the original, though, it was a fixed‑cardioid design, and despite featuring the same K47/K49 capsule that was used in many U47s, the circuit changes gave it a different sound characteristic that users often describe as being ‘less 3D’ and less ‘warm’. It still proved to be a very popular microphone, however, and alongside its now ubiquitous high‑SPL roles, is a more than respectable vocal and general instrument mic.

Visually, the inspiration behind the Warm Audio WA‑47F is obvious, and its appearance is very similar to the original. When put side by side with the Neumann, the WA‑47F is noticeably larger and not as slick‑looking build‑wise, but its nickel‑plated brass body feels solid and weighty and — much like the original — inspires a feeling of confidence. The mic ships in a felt‑lined wood case and, like the original, is attached to a mic stand using an inbuilt yoke. The WA‑47F features an onboard 10dB pad, as well as a high‑pass filter that rolls off at 140Hz.

Warm don’t give too much away about the origins of their capsule, but they do say that the 47F features a single‑backplate, cardioid‑only version of the capsule used in their WA‑47 valve microphone, which has been tuned to be faithful to the original K47 capsule used by Neumann. Other key components include an AMI USA‑made output transformer, as well as premium components such as Fairchild field‑effect transistors (FETs) and WIMA capacitors.

I have a reissue Neumann U47 FET at my studio, so I thought I’d keep this part of the review simple and pit the WA‑47F against the real thing. Over a single session, I compared the mics positioned outside a kick drum and on bass guitar cabinet, as well as on a male vocal and acoustic guitar. It’s hard to do a truly scientific test in this scenario, but I like to judge mics on the same performance, so I took care to position the capsules of both mics as close as physically possible to each other. Even so, this does mean that the capsules will still be one or two inches apart, which can of course make a difference to the sound captured.

After some careful level matching, the recordings of my male vocalist, who has a baritone‑style voice, sounded almost identical.

With that caveat in mind, the first recordings I made were of acoustic guitar and vocals. These revealed that the WA‑47F was noticeably more sensitive than the Neumann, which wasn’t a problem, but might matter to some. After some careful level matching, the recordings of my male vocalist, who has a baritone‑style voice, sounded almost identical. Listening carefully on my high‑quality studio monitors and headphones revealed slightly more midrange presence on the Neumann, as well as a slight bump around 100Hz on the WA‑47F. On acoustic guitar, these differences seemed to present themselves a little more obviously, and I could again hear more low end on the WA‑47F, which could be perceived as either ‘warmth’ or coloration, depending on what you like in a mic. On the vocal the differences were so small I really wouldn’t care, but I preferred the real deal on the acoustic guitar, where it seemed to deliver a more balanced capture.

The low‑frequency roles that most people associate these mics with further revealed what I perceived as differences between the two. Both mics did a great job positioned around three inches away from a bass guitar cabinet, but I preferred the midrange presence of the U47 FET and found the slight emphasis in the low end on the WA‑47F to be unnecessary. Placing a mic close to the resonant head of a kick drum can be a slightly unpredictable business in my experience — on one session it can sound amazing and the next like garbage. When auditioning the mics in this scenario it took me a little while to find a good position, and I was slightly disappointed with how the Warm model performed in this comparison. I got more low end from the WA‑47F than from the FET 47, but that is not necessarily the most important thing in this role. The Neumann sounded more present in the midrange and generally more balanced and clear, and in all of my kick drum tests I preferred the more expensive option.

I’ve reviewed a number of Warm Audio microphones this year, and have been impressed with the formula they have developed. By combining third‑party capsules with high‑quality transformers and other key components, they’ve offered excellent value for money. However, I’ve begun to notice that many of these models share the same pleasing bump in the low end, which gives them what might be called a ‘vintage’ sound (I’m trying hard not to use the word warmth!). In general, that’s no bad thing, but in this case I had the opportunity to compare the Warm mic with its inspiration, which made that aspect of the Warm Audio ‘sound’ more obvious. Although I preferred the original in most of my tests, though, it’s important to point out that the differences were relatively small and that, judged on its own merits, the WA‑47F is a good‑sounding mic that will perform the role of a high‑quality all‑rounder very well indeed. It’s also worth pointing out that this mic is around a quarter of the price of a current U47 FET reissue!

I've provided a few audio examples so you can hear for yourself how this recreation of a studio classic sounds against the real thing. For each example, I positioned the two microphones as close as possible together and ensured they were the same distance from the source. For all the examples the mic was running through the preamps on my Audient ASP8024 with no processing.

My thanks to Steve Hovington for his playing and singing.

This is how the Neumann U47FET sounded positioned around 6-8 inches from the acoustic guitar.

This is how the Warm Audio WA-47F sounded positioned around 6-8 inches from the acoustic guitar.

How the U47FET sounded on a male vocal performed 4-5inches from the mic with no pop filter.

How the WA-47F sounded on a male vocal performed 4-5inches from the mic with no pop filter.

The FET 47 is a studio classic for recording bass guitar cabinets and in this example, I had the mics positioned 3-4 inches from the grill of the speaker. This is how the FET47 sounded.

How the WA-47 sounded alongside.

For my kick drum test, I positioned the two mics about two inches away from around the centre of the resonant head of my 24-inch kick drum. This is the example for the FET47.

And how the WA-47F sounded doing the same job.

Warm Audio’s latest version of a classic studio mic gets close enough to the original to represent good value, especially if you’re looking to flesh out your collection with a mic that can handle high‑SPL jobs with ease.