API celebrate half a century of their iconic preamp design with a reissue for the 500 series.

It’s now a shade over 50 years since API’s founder Saul Walker designed the company’s first microphone preamplifier, the 312, and its core circuitry is still employed in most of API’s products. Indeed, the 312 itself remains very highly regarded, yet this preamp’s design is deceptively simple and elegant, comprising just three elements: a bespoke input transformer, a 2520 discrete op‑amp providing the variable gain stage, and a bespoke output transformer. (See the Gain: Transformers & Op‑amps box for more detail on those.) But the 312 is far more than the sum of its parts. In particular, this preamp’s phase linearity makes it a popular choice for recording transient‑rich material, such as drums, and the output transformer’s unusual construction bestows the preamp with low‑level but appealing low‑frequency distortion properties.

API invented the 500‑series format, of course, so it’s no surprise that they already offer a couple of 312‑derived modules, the 512C and 512V. Both of these use an extended 312 circuit incorporating an instrument (DI) input, and the 512V adds an output level control and second 2520 op‑amp. But as part of their recent anniversary celebrations, API have decided to go back to their roots and create both standard and limited‑edition 50th Anniversary 500‑series versions which are both, essentially, the original, unadorned 312.

The new 50th Anniversary 312 model sports a gold front panel and a vintage‑style round VU meter. Behind the faceplate is a replica of the original 312 circuit board, with hand‑wiring to the panel controls, as would have been the case back in the day. Proprietary input and output transformers are employed, matching the construction and characteristics of the originals. 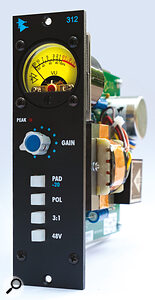 The standard version, pictured here, has API’s more familiar black panel. It sports the same VU meter and circuitry as the 50th Anniversary model, but there’s one extra button, which I’ll discuss in more detail later. In this standard module, the PCB has been extended up to the front panel, and the switches and gain control mount directly on to it, speeding construction by avoiding the hand‑wiring. The specifications are identical for both versions and the controls are similar too, although all four buttons illuminate in the standard 312 whereas the 50th Anniversary model only has a status LED for phantom power.

Below the VU meter (0VU = +4dBu) is a red peak LED which illuminates at +18dB, though the maximum output level is a whopping +31dBu. The uncalibrated rotary gain control, with that iconic knob, spans +34 to +69 dB, and the maximum microphone input level is just ‑4dBu. However, engaging the ‑20dB input pad accommodates mic signals up to +16dBu, and shifts the gain range down (+14 to +49 dB).

Both models have buttons to invert the signal polarity and activate 48V phantom power, but there’s that extra button I mentioned for the standard version, which is labelled 3:1. This facility, which also appears on the 512V model, activates a relay to reconfigure the output transformer for a 1:1 ratio, instead of the usual 1:3. For more on why you might want to use that, see the 'Gain' box.

It did all that I expected of it, deliciously.

It was the Standard 312 that arrived for review and it did all that I expected of it, deliciously: it exhibited that lovely fast, dynamic sound, with a hint of low‑level grit. With low signal levels, the low‑end (above 200Hz) picks up most of the second and third harmonic distortion but that shifts towards the higher frequencies as the signal level rises. In short, it sounds characterful in all the right ways. 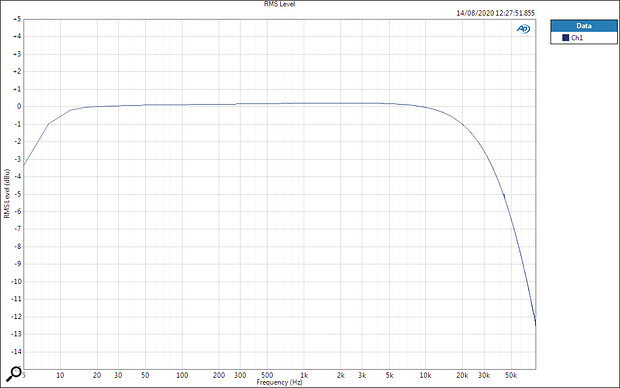 The frequency response at 60dB gain shows a gentle roll off above 10kHz, reaching ‑3dB at 35kHz. Pretty good for a 50‑year‑old design full of transformers! 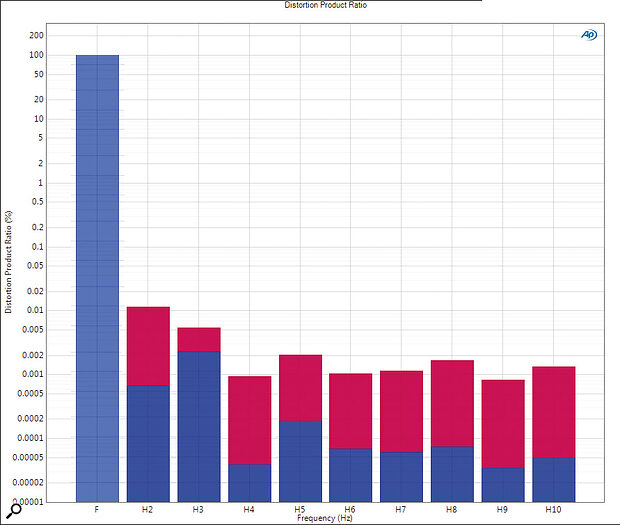 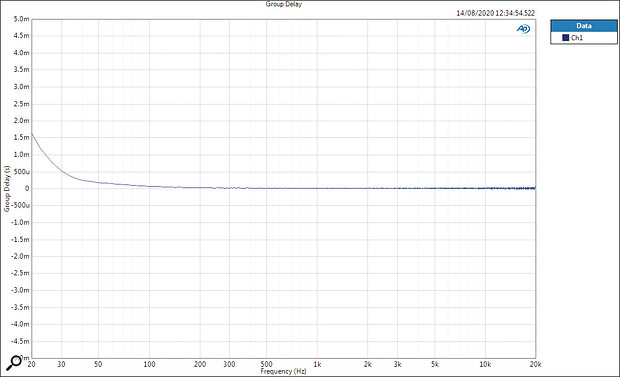 The phase response is extremely linear down to below 100Hz and the phase shift only reaches 500us at 30Hz.

My measurements, taken with an Audio Precision analyser, also confirmed that while the technical performance is obviously not current state‑of‑the‑art, it is certainly very good for a 50‑year‑old design. The Equivalent Input Noise (EIN) measured ‑127.5dB (150Ω, 60dB gain, 20Hz‑20kHz unweighted), THD+Noise was 0.03 percent (60dB gain, +4dBu output), and the frequency response measured ‑1dB at 8Hz and 20kHz. Impressively, the only gain bunching, a common issue with cheaper preamps, occurs at the very bottom of the gain control’s rotation, and the rest of the range is pleasingly uniform.

While the 312 may have a minimal feature set, it remains a very capable and desirable mic preamp, with good technical performance and a charmingly attractive sound character, which can be manipulated creatively with the gain control. The standard 312 is a very lovely preamp indeed and will please purists and pragmatists alike. 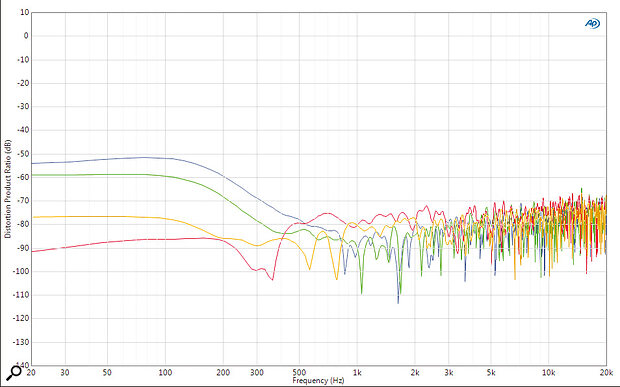 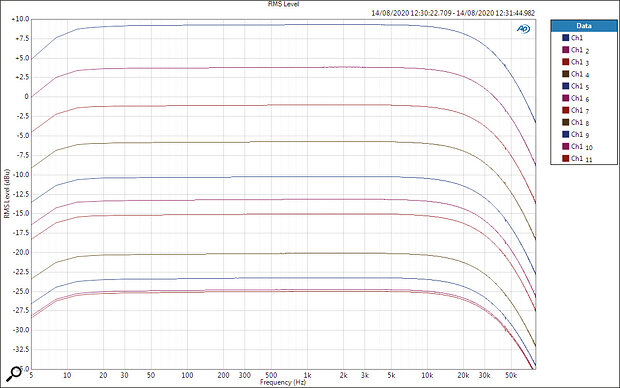 A set of frequency response traces (note the extended measurement bandwidth) taken with the gain control set to every calibration dot. With the exception of the bottom three marks, the spacing is nicely uniform and there is no gain‑bunching at all at the loud end of the control, which is excellent.

The input transformer in the 312 design unbalances the mic input, of course, but it also provides a lot of the preamp’s standing voltage gain, thanks to its 1:7(‑ish) ratio. Originally, API used their own 2622 transformer but later incarnations employed a Jensen 110K, and the new 500‑series 312 modules use one marked as the API 2516. 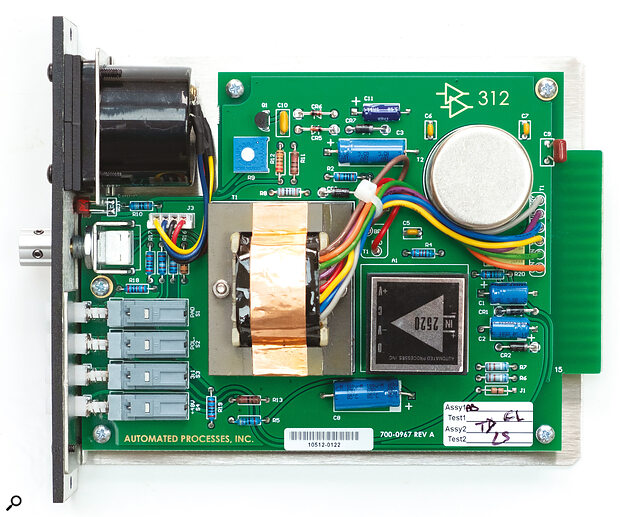 After the input transformer, the signal passes to a single 2520 discrete op‑amp which serves as the variable gain stage. This comprises just nine transistors, configured as a long‑tail differential input pair, a second long‑tail pair that drives the intermediate stage and a compound push‑pull output section.

The 2520’s output is passed to a bespoke output transformer which provides the preamp’s balanced line output. This transformer is the API 2503, and it’s unusual in that it has a ‘quad‑filar’ construction, meaning it has four identical windings, and this permitted various connection formats. In earlier designs, the user could select 1:1, 1:2 or 1:3 output ratios, the last two providing passive signal voltage gain. In the 50th Anniversary 312, the output ratio is fixed at 1:3, while for the standard version it can be switched between 1:1 and 1:3, the former making the output 9.5dB lower than the latter, thus allowing the preamp to be driven harder before overloading the next device in the signal chain.

The first 2503 transformers were wound with the wires for the four windings arranged in a flat ribbon, and this kept their spacing very consistent and uniform, which bestowed the transformer with an unusually wide bandwidth and a very linear phase response. Current versions of the transformer are usually made with the four wires woven into a braid called a ‘Litz’ format, which has the same engineering benefits.

This reissue of API’s classic preamp is designed to be as close to the original design as possible and succeeds in a delightful way.