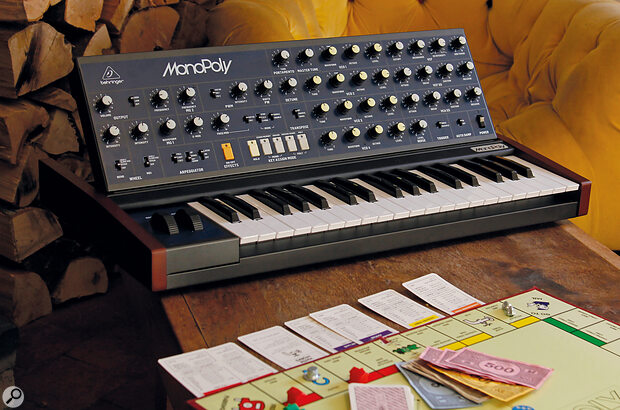 We test Behringer’s take on an underrated Korg classic.

Korg launched the Mono/Poly in 1982 but, from the outset, it was seen as a bit of an evolutionary mistake and was always overshadowed by its six‑voice sibling, the Polysix. Perhaps this was because people saw it as an under‑endowed polysynth rather than as an interesting monosynth. Its complement of a single VCF and a single VCA placed it firmly in the paraphonic rather than the truly polyphonic camp: you could play four separate notes at once, but they wouldn’t each have their own filter or envelope. The Polysix — and, to an even greater extent the Roland Juno‑6 — thus seemed to render it obsolete even as it was announced. With the Roland SH‑101 and the Sequential Pro‑One gobbling up the monosynth market and Roland’s new Juno‑60 redefining what was possible for a low‑cost polysynth, it had nowhere to go and was discontinued just two years later.

But some time after the turn of the century, people started to get rather excited about the Mono/Poly. At first, I thought that this was just a knee‑jerk reaction to the ballyhoo regarding all things analogue, but its reputation continued to gain ground until it assumed the mantle of one of the more desirable of the early‑’80s analogue synthesizers. And there is some logic to this: it offered some powerful features when used as a monosynth, not the least its uncommon complement of four oscillators, as well as oscillator sync and cross‑mod, good interfacing and a pitch CV input that used the V/oct standard rather than the less common Hz/V system found on previous Korgs.

Fast forward to 2021 and Behringer have released an unofficial recreation, to meet a demand that can (perhaps) no longer be satisfied by the second‑hand market. So, how does the MonoPoly (the Behringer, without a slash) compare with a factory‑original Korg MP4 Mono/Poly (with a slash)? Is it a clone, an homage, or paintwork engineering?

My first impressions of the MonoPoly were two‑fold. Firstly, it looks and feels very smart. Secondly, it’s much smaller than I had expected, to the extent that I had to place a plank across my X‑stand and sit the synth on this so that it didn’t fall between the supports. Much of the saving in size has been achieved by losing seven notes from the bottom end of the keyboard. Fortunately, the keys are full size, although the action is extremely light, and those who are expecting a bit more resistance may not like it.

Having placed it on its plank I lifted the control panel to angle it toward me, using the metal prop with the company name printed on it to hold it in position. Hang on... this felt familiar, which wasn’t surprising with an Arturia MatrixBrute sitting just a few feet away.

With my original Mono/Poly on the adjacent stand and the two connected via their CV+gate I/O, I hooked them both up to my sound system and to a signal analyser, the latter of which proved to be invaluable as the test progressed. Next, I upgraded the MonoPoly’s firmware to the latest version using the Synthtribe software (see box). There were some significant bugs in the version installed when it was delivered, but many of these had been corrected in v1.0.6.

I was now ready to compare the two, so I started by testing the oscillators to see how closely the Behringer’s four waveforms echoed the Korg’s. Since there’s no way to tap the oscillators’ outputs directly, I opened the filter fully on each synth, set the resonance on each to zero, defeated all forms of modulation, set the VCA contour to an organ shape, and played. I was very surprised to find that, with the exception of the triangle wave (which has weak high harmonics), all of the MonoPoly’s waveforms sounded dull when compared with the original’s. Nothing in the oscillator section seemed to explain this, so I turned to a more likely culprit — the filter.

It was the work of just minutes to identify the problem. With all of the other controls set to zero, the maximum cutoff frequency of the filter in my Korg is (in round figures) 19.6kHz. With the filter contour or key tracking pushing it even higher, the maximum reaches 21.1kHz. But the same settings on the Behringer revealed maximum cutoff frequencies of 6.5kHz and 7.6kHz respectively. This meant that the amplitudes of harmonics at 15kHz (around the upper limit of many adults’ hearing) were about 24dB down when compared with the original. Even half‑deaf musicians with a history of standing stupidly close to big speakers will be aware of that much attenuation. However, all hope was not lost, so please read on because we’ll be returning to this issue in a moment.

My next job was to test the contours. With both contours set to 0,0,0,0, the original produces a squelchy click. The same settings on the MonoPoly resulted in a slightly longer transient, although the difference is not great enough to concern me. Further tests showed that the maximum contour times were also different, with the Korg’s maximum attack and decay each lasting 13 seconds compared with the Behringer’s nine seconds. This means that you can create longer sweeps on the original. Unfortunately, the Behringer’s contours share two issues with the original’s. If you set the attacks of the VCA and VCF contours to their maxima and press a key, you’ll obtain a low‑amplitude click. Then, when you release it, you’ll obtain another. In addition, if you reduce the attack of the VCA to zero you’ll hear a significant bump. These are both attributes of the...