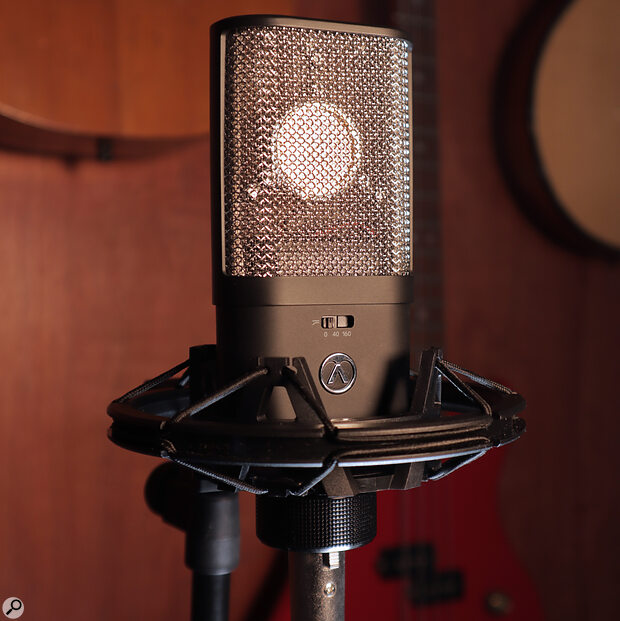 When AKG’s Vienna factory closed in 2017, it seemed 60 years of innovation in microphone manufacture had run its course. Martin Siedl, however, had other ideas, and established a new business to harness the expertise of AKG’s design team. Austrian Audio are a forward‑looking company with an engineering‑led approach, seeking to retain what was good about old designs whilst exploiting modern developments in materials, manufacturing and measurement.

One of the company’s initial goals was to create a large‑diaphragm capsule with the sonic qualities of AKG’s revered ‘brass ring’ CK12, but without its notorious production difficulties and inconsistency. This they achieved with the CKR12, which made its debut in the OC818 multi‑pattern microphone; the fixed‑cardioid OC18, meanwhile, uses a single‑sided variant of the same capsule, designated the CKR6.

The OC18 is already a strong competitor for the likes of Neumann’s TLM103, but Austrian Audio have seriously turned up the heat on their rivals with the new OC16. This mic also uses the CKR6 cardioid capsule, which is still handmade in Vienna; but, by outsourcing metalwork and PCBs, relaxing manufacturing tolerances and simplifying the basket design, they’ve brought it to market at barely half the price.

One of the distinguishing features of the OC18 is its completely open headbasket, which has no frame to introduce internal reflections. The OC16 has a marginally more conventional design, with vertical bars along the sides, though it’s still very open. Features‑wise, the only omissions are the middle position on the high‑pass filter, and the pad switch. Since the OC16 can tolerate up to 148dB SPL, the latter isn’t really an issue for the mic itself, though loud sources could overload downstream devices. The OC16 comes in a smart and practical padded case with both a clip and a plastic spider mount; the latter was an uncomfortably snug fit on the review mic, but did the job.

In terms of specifications, the OC16 falls short of the OC18 only in having a slightly lower sensitivity (11mV/Pa to that mic’s 13) and higher self‑noise (14dBA as against 9dBA for the OC18). Practically speaking, there are few real‑world recording situations where this level of noise is problematic, and it’s still several dB better than the classic AKG C414EB. A bigger difference concerns pair matching. Production tolerances for the OC18 are so tight that any two examples can be used as a stereo pair, and it’s even possible to mix and match OC18s and OC818s; stereo sets of both models are also available. The OC16 is not available in a matched pair, nor is it guaranteed that any two examples will be close enough for stereo use. I only had the one mic for testing, but my feeling is that this is a trade‑off many people will happily accept; in most studios, the main stereo application for large‑diaphragm mics is probably spaced drum overheads, where the left and right signals tend to be so different that minor variations won’t be noticeable anyway.

Austrian Audio have seriously turned up the heat on their rivals with the new OC16.

Like the OC18, the new mic has a noticeable lift in the high frequencies, but the overall response is so smooth that it doesn’t come across as edgy or even particularly bright. In fact, putting it up against other well‑regarded mics often made them seem a touch gritty and harsh in the midrange by comparison. The OC16 is a fine vocal mic, while its high SPL handling means it also excels on general studio duties. On a whim, for example, I put it up as a front‑of‑kick mic on a drum kit. Not only did it handle the transient peaks without sweating, but it also captured plenty of low‑end punch, while spill from snare and cymbals sounded great. As you’d expect, it also delivers a lovely clean sound on acoustic guitar, with just a hint of high‑frequency sparkle.

All in all, this is a hugely impressive product. Yes, you can buy even more affordable large‑diaphragm capacitor mics — but how many of them have a European‑made capsule, let alone one with this heritage or quality level? This is a mic that holds its own against rivals costing many times the price, and if I was looking for an affordable yet top‑notch mic for a home or project studio, it’d be right at the head of my shortlist.

A superb all‑round studio mic at an extremely competitive price!