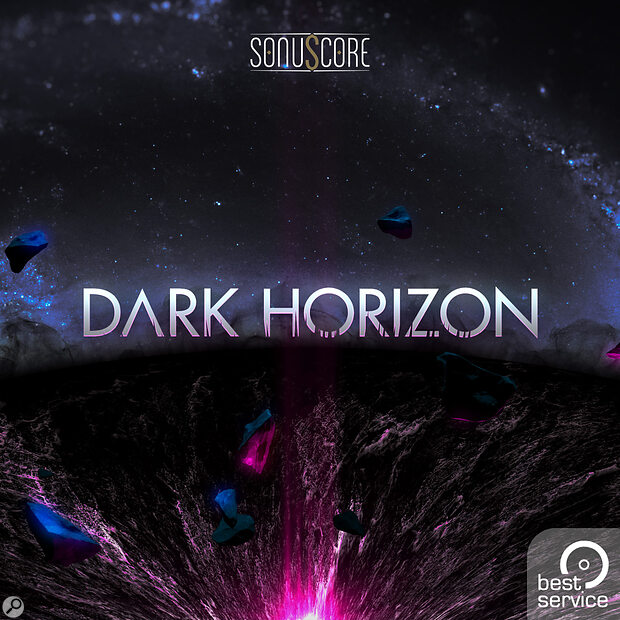 Anyone familiar with The Orchestra or Elysion will appreciate that, if you make the effort to get to grips with the performance features and modulation options on offer, their underlying UI/engine is powerful stuff. It’s perhaps not surprising, therefore, that other products are being developed that exploit the same technology, and the latest of these is a collaboration between Sonuscore and Best Service: Dark Horizon. As the title might suggest, the underlying sounds offer a darker, more low‑end vibe compared to Elysion’s somewhat broader sonic palette.

In terms of the sounds, Dark Horizon provides two levels of presets; individual instruments and themes (global presets). Some 80 individual sounds are provided, and these are organised into four categories: Synthesized, Orchestra, Dirt & Noise and Dirt Bikes. No, I wasn’t sure I quite believed that latter when I saw it either but, apparently, that’s a thing. That said, the raw samples have been processed here to provide some very cool, gritty, dark — and surprisingly musical — sound elements. In terms of the other individual sounds, the emphasis is on a darker sound palette than Elysion but includes plenty of options from pulse‑like sounds to powerful analogue synth textures. Some 180 themes are included that combine up to four of the individual sounds. These are organised into five categories; playable sounds, lowest texture, mono arpeggios, rhythmic pulses and poly animations. You can search through these via a well‑designed tag‑based browser.

...the emphasis is on a darker sound palette than Elysion but includes plenty of options from pulse‑like sounds to powerful analogue synth textures.

There are some differences in the sound engine. For example, unlike the five sound slots of Elysion, Dark Horizon offers a maximum of four layers. Equally, while the well‑featured arpeggiation/step‑based modulation system is included here, you don’t get the envelope‑based modulation options. However, that still provides plenty of sonic scope, and the combination of mixing, effects, modulation and arpeggiation elements available on a per‑layer basis mean a single preset can easily get you a long way into a complete musical cue. The mod wheel is put to particularly good use here within the modulation system as a sort of macro control, whether that’s blending between the A and B settings of each arpeggiator or providing manual control over the very effective filter options provided within each sound layer. In many of the presets, it’s therefore very easy to move from subtle tension to full‑on edge‑of‑seat panic with a sweep of the mod wheel.

This last comment probably defines Dark Horizon’s most likely target audience. If you are a media composer who works in modern drama, horror or sci‑fi genres, then Dark Horizon may be right up your sonic street. Whether it’s CSI or Stranger Things, there are sounds here that would fit the bill. It is perhaps designed for a somewhat narrower niche than Elysion, but for those prepared to master the powerful sound‑design elements of the engine, there is still plenty of sonic mileage to be had. Well worth auditioning.