Book Review | An Introduction To Writing Music For Television 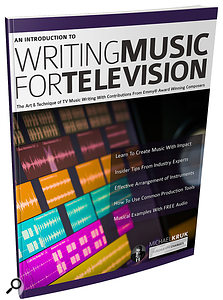 I recently reviewed Tristan Noon's excellent 'From DAW To Score' (see SOS October 2019) which provides budding composers with an excellent introduction to the process by which their freshly composed music can be turned into a score ready for the recording session. However, before you can attempt that, the music itself has to be written...

If you're looking for some initial insights into the creative stage of writing music to picture, then Michael Kruk's new book (published by Fundamental Changes, ISBN: 9781789330557) might be just what you need. Michael is writing from a position of considerable experience as he has an impressive set of credits based in the documentary genre and, throughout the book, calls on the expertise of fellow composers Michael Price (Sherlock, The Unforgotten), Mac Quayle (Mr Robot, Feud) and Walter Murphy (Family Guy, American Dad) to chip in from their genre-specific backgrounds. If you're a guitar player, you may already be aware of the book's publishers, Fundamental Changes. Led by Joseph Alexander, they have an excellent reputation for music tuition books, so the team behind the project is a very good one.

Indeed, two commendable traits seen elsewhere in Fundamental Changes' extensive catalogue are evident here. First, this is a concise book (it runs to 112 pages in total), but it's right on point, and a great introduction to the topic. There is no waffle, just the good stuff. Second, to accompany examples of the practical compositional concepts introduced in the book (many illustrated by musical notation in the text), a collection of audio files can be downloaded from the Fundamental Changes website. Whether you read notation or not, the audio examples make the written concepts very 'real' and they're a valuable part of the overall package.

It's right on point, and a great introduction to the topic. There is no waffle, just the good stuff.

This is very much a book focussed on how the compositional process differs for TV and film compared with that for other musical contexts, and the nine chapters cover a lot of ground. This coverage starts with some general principles of the composer's role within the overall project and, in chapter one, the importance of creating a sonic palette at the start of a project, so that your musical storytelling has a consistent 'voice' and you can work efficiently under the (often) compressed time-scales associated with composing for TV. There's solid, sensible, advice here. As elsewhere in the book, the examples used to illustrate different 'mood palettes' (action, tension, scary, etc.) are described in a clear, concise and helpful fashion.

Chapters two and three cover the topics of creating musical movement within a cue (or across related cues) and how chords/harmony can be used to create certain moods. In both topics, the different mechanisms available to a composer are discussed concisely and neatly illustrated, while the pros and cons of 'temp' music for the composer are also discussed. If you're approaching TV composition from a performance background (rather than music theory), chapter four is one of the best (and most easily understood) descriptions I've ever read on musical modes and their uses. It's light on theory but a great practical introduction. Chapters five and six focus on the use of melody, motifs, and how to handle intros, outros, builds and reveals. Again, this is very much an introduction to all these topics, but the key concepts are clearly covered and the examples, in both notation and audio format, are always helpful.

The final three chapters cover the need for developing 'production' and 'orchestration' toolkits, as well as the pros/cons of developing both short-form and long-form versions of your cues to give the music editor choice and flexibility. Given that so much TV music is produced entirely in the composer's computer, production skills can be as important as compositional skills. Equally, orchestral music, in pure or hybrid form, is a core part of TV soundtracks, and this section of the book outlines the key issues involved in making your sample-based orchestral sounds 'work'.

Of course, reading these 112 pages won't transform you into a fully-fledged TV composer overnight. The content is more likely to appeal to the less experienced media composer, and you should definitely see it as a starting point for further study. But if this is a world you wish to inhabit, the book really does provide an excellent introduction to the creative (and some technical) parts of the process. Throughout the book, quotes from the experienced Michael Price, Mac Quayle and Walter Murphy are used well to clarify or add emphasis to the ideas being covered. If this is the sort of advice you need, the modest price would be money very well spent.