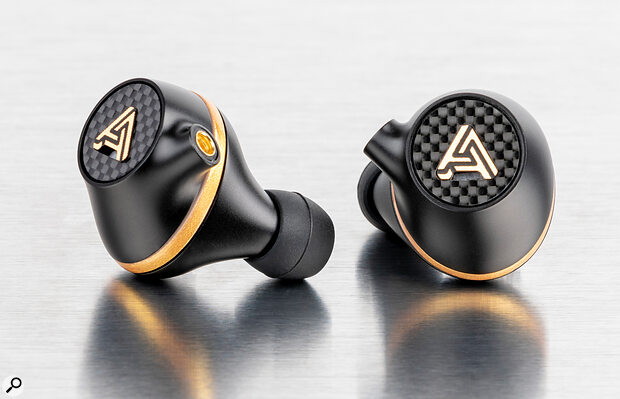 Amazingly, Audeze have shrunk their proven planar magnetic driver technology to fit into a conventional earbud format. How do they sound in practice?

Planar magnetic headphones are enjoying a renaissance, and Audeze deserve much of the credit. Thanks to the advances made by Dr Drag Colich, they have overcome traditional limitations such as lack of sensitivity and a poor high‑frequency response, whilst also building on the established strong points of the technology. Flagship Audeze models such as the LCD‑X thus offer a transient response, bass extension and low distortion that is difficult or impossible to match in a conventional moving‑coil design. The only significant negative that they share with old‑school planar (also known as orthodynamic) models is that they’re big and heavy.

However, Audeze haven’t ducked the challenge of making planar magnetic technology more compact and, back in 2017, they launched the intriguing iSine 10 and 20. Billed as the first‑ever planar in‑ears, these were perhaps better thought of as a halfway house between earphones and open‑backed headphones. They didn’t offer the discreetness or the isolation of conventional earbuds, and they were fiddly to put on and pack away, but they sounded good, and represented an impressive technical achievement.

Five years on, the next stage of Audeze’s miniaturisation programme has delivered the Euclid: a pair of planar magnetic earphones designed as a direct alternative to conventional earbuds. So, whereas the iSines were open‑backed and leaky, the Euclids are designed to provide isolation. The iSines required support from earhooks to stay in place reliably, but the Euclids are small enough to be retained by friction alone.

The Euclids are supplied in a compact and robust ABS case made by Pelican, which has shaped cutouts for the earphones themselves and a larger compartment for the cable and other components. A mesh bag is also included, as is a Bluetooth cipher module. They aren’t the smallest earphones I’ve ever seen, but no‑one could deny that they are small enough to qualify as earphones, and once you’ve achieved a tight fit in the ear canal, all that’s needed to keep them securely in place is to loop the cable over the top of the ear. As with most earbuds, a tight fit is also necessary to get any sort of bass response.

The Euclids ship with silicone tips in three different sizes, plus two pairs of Comply foam tips. I couldn’t get any of the silicone tips to form a seal in my own ears, but the foam tips worked well enough, and if you use any other generic earbuds on a regular basis I don’t think you’d have trouble getting used to the Euclids. The Pentaconn cable is a tough but lightweight braided design, and attaches to the earphones themselves using gold‑plated MMCX plugs, which have a solid push fit whilst allowing free rotation. Overall, whereas the iSines always seemed a little bit precarious in use, it feels as though there’s a lot less to go wrong with the Euclids.

Conventional earphones use either a single moving‑coil dynamic driver, or a balanced armature design which can have eight or more separate drivers. The latter can offer better specifications on paper, but inevitably, the need for multiple crossovers brings with it some deleterious side‑effects. One of the chief selling points of the Euclid is that they can match or exceed the specs of a good balanced‑armature model despite using only a single driver, with no crossover artifacts. Audeze say that the Euclid has the highest dynamic range of any in‑ear monitor “in its category”, and it is said to be able to deliver more than 120dB SPL before some unspecified distortion level is reached. Frequency response is given as 10Hz‑50kHz, thought without any tolerances, this is not a particularly meaningful specification.

Unlike balanced‑armature earphones, which use multiple drivers, the Euclids employ a single planar magnetic driver, eliminating the potential for crossover artefacts.

More directly relevant to everyday use are the specifications for impedance and sensitivity. At 12Ω and 105dB for a 1mW input respectively, these suggest that it should be possible to drive the Euclids as loud as you like from pretty much any source, and so it proved in practice. Perhaps the most eye‑catching spec, though, is the figure of less than 0.1 percent THD for a 100dB SPL input (presumably a 1kHz sine wave, though this isn’t stated). No specification for isolation is given, and of course this is likely to depend on the choice of tip and how good a fit you can achieve.

Speaking for myself, I’ve rarely been tempted by generic earbuds for mixing on the go. Yes, they’re incredibly compact, but I never find them as comfortable as headphones, and because they’re so sensitive to fit, there’s always a nagging concern about the consistency of the sound from one session to another. Custom moulds may overcome those drawbacks, but even then, I’m not convinced that in‑ears improve on the best on‑ear headphones for sound quality. The drudgery of carrying an extra case around is, in my view, more than compensated for by the advantages of good headphones. Are the Euclids good enough to convert this diehard to the joys of in‑ears?

Comfort‑wise, they are similar to any other pair of high‑quality universal‑fit earpieces. Which, in my case, means I never learned to ignore, or enjoy, the sensation of having them stuffed into my ear canals, but your mileage will probably vary. To me, they delivered about the same amount of isolation as a typical pair of closed‑back headphones, or perhaps slightly more: another judgement which is likely to be different for different users.

If you find universal‑fit earpieces comfortable in general, and you particularly value compactness, isolation and portability, the Euclids are absolutely a valid choice on sonic grounds.

In terms of sound, though, I have to admit that I was impressed. It’s hard to perform fair A/B comparisons with conventional headphones, but my sense was that these are comparable with the better closed‑back models I have tried. The tonality struck me as generally neutral; if anything, there’s a slight emphasis in the midrange, which is probably the least bad area to have slight emphasis in a monitoring system. And the overall sound is more natural than you might expect from in‑ears, with no obvious splashiness or weirdness from crossover artifacts. At the low end, provided I’d put them in right, I could hear EQ moves at 50Hz on bass and kick drums; at the top end, their frequency response was perhaps a little muted above 10kHz, but that’s probably better than being too bright.

All in all then, I probably would rather mix on the Audeze Euclids than on most pairs of affordable headphones — but therein lies the rub. The Euclids are quite a long way from being affordable to most people, and at around the same price, you can buy some stunningly good conventional headphones. Even assuming that the need for isolation rules out open‑back models, including most of Audeze’s own designs, that still pitches the Euclids against the likes of AKG’s K872. It also means they go head‑to‑head with the very best custom moulded in‑ears, which are likely to be more comfortable, provide even better isolation and be more consistent. Nevertheless, if you find universal‑fit earpieces comfortable in general, and you particularly value compactness, isolation and portability, the Euclids are absolutely a valid choice on sonic grounds. And inasmuch as I personally still lean the other way, that’s no reflection on what Audeze have done with this design. Creating a full‑range planar magnetic driver on such a small scale is an incredible achievement, and whether or not the Euclids meet your budget and your needs, the potential for future products is exciting.

They are costly and no custom moulds are available, but Audeze’s planar magnetic in‑ears sound good and represent an impressive technical breakthrough.