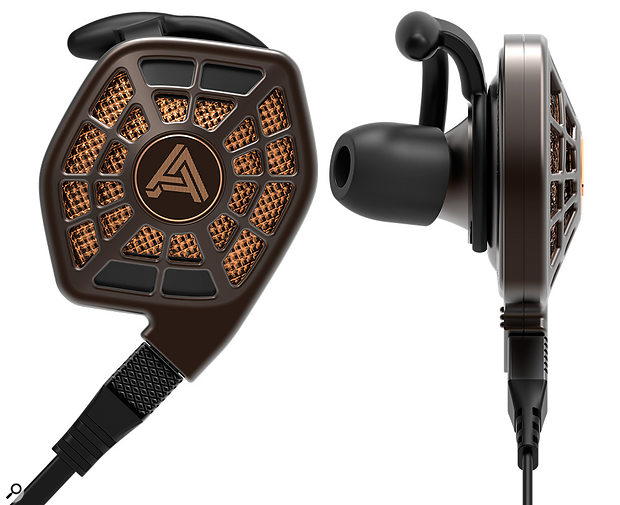 Audeze have managed to shrink their planar magnetic driver technology into a pair of in-ear monitors — with impressive results!

Alternative transducer technologies have enjoyed something of a revival in the past few years. More and more of us are now converting sound to electricity using ribbon microphones, as technological advances have made them smaller and more sensitive; and at the other end of the chain, quite a few studio monitors now sport ribbon tweeters. Meanwhile, in the headphone world, planar magnetic drivers have become increasingly significant, thanks in no small part to the work of US manufacturers Audeze.

In its most basic form, a planar magnetic driver consists of a very thin membrane with ribbon-like wires embedded in it, suspended between two arrays of magnets. When an alternating current is passed through the wires, electromagnetic induction causes the membrane to move alternately towards one set of magnets and the other, generating sound waves in so doing. It’s a design that, in principle, should be easy to drive, with low distortion and a full bass response; the challenges are to achieve an extended high-frequency response, and above all, to make planar magnetic drivers sufficiently small, light and sensitive.

Audeze have put a lot of work into developing advanced planar magnetic drivers, and their flagship open-backed headphones such as the LCD-X are stunningly good. Nevertheless, the LCD-Xs are still pretty large and heavy as headphones go, so the fact that Audeze have now been able to scale down their technology to create the world’s first planar magnetic in-ear monitors is pretty remarkable. Two models are currently available for music applications: the iSine 10 and iSine 20. According to Audeze, the 20s present a slightly higher nominal impedance (24Ω to the 10s’ 16Ω), which apparently translates to “more resolution” and a “smoother mid-range”, but the cheaper iSine 10s have the same quoted frequency range of 10Hz to 50kHz (plus or minus an unspecified number of dB, admittedly).

The iSine 20s come in a smart box that’s about the size of the boxes software used to come in, in the days when we bought software in boxes. Also included are a smart fabric carry case, a bewildering variety of tips, hooks and other accessories, and a flat cable. This terminates in two-pin connectors that mate securely with the base of each iSine. Audeze warn that the cable is not intended to be repeatedly connected and disconnected, and the carry case is designed to accept the iSines with cables attached. The standard analogue cable ends in a mini-jack, but iPhone users can also buy an optional Lightning cable with built-in DAC.

Despite using an alternative technology internally, Audeze’s full-sized headphones don’t require any shift of mindset on behalf of the listener: from the user’s perspective, they can be treated just like any other pair of ’phones. The same is not true of the iSines, which are significantly different from conventional in-ear monitors. For one thing, although they are not heavier than all dynamic or balanced-armature designs, they are quite a bit larger. For another, they are not designed to fully seal the ear canal, but to allow air to pass in and out; Audeze call them ‘semi-open’.

If being invisible is high on your list of essential qualities in a pair of in-ears, you can rule out the iSines straight away. Roughly hexagonal in shape, and measuring 35 x 31 mm, they look like scale model TIE fighters docking with your head. This may well be the height of fashion in some circles, but inconspicuous it is not.

This docking procedure is effected by means of tubes on the back of the driver, which transfer its output into the ear canal. Removable soft neoprene tips are mounted on the business ends of these tubes, to make them comfortable and ensure a snug fit. Three pairs of tips in different sizes are provided. However, the fact that they aren’t intended to form a complete seal, coupled with the sheer size of the drivers, means that the tips alone don’t provide a secure means of holding the iSines in place.

Obviously, if you’ve just spent £549$600 on a pair of in-ears, the last thing you want is to have them continually falling out, and this is especially true of the iSines, as the rigid plastic used to make their casing seems to have been chosen less for robustness and more for its lightweight qualities. To keep them in their place, Audeze ship the iSines with a veritable cornucopia of clip-on mounting gadgets, some designed to brace against the inner part of the outer ear, and some designed to fit over the ear. A bit of experimentation is needed to find the best option for you; I settled on the over-ear hooks, which proved reasonably comfortable and secure enough for everyday use, though I’m not sure I’d want to wear them while running or dancing.

However, this brings me to my first complaint about the iSines: they are, in a nutshell, fiddly. Because they’re expensive and potentially fragile, you will want to keep them in their carry case when not in use. Packing them away involves sliding each iSine into a shaped slot in their plastic holder, before coiling the cable carefully round the outside of this holder and sliding the whole shebang into the fabric case. This is a little bit tedious, but what’s really annoying is that the ear hooks have to be removed from the iSines each time they’re packed away, then carefully refitted when you unpack them. This wouldn’t be so bad if there was, firstly, a compartment in the carry case in which to store the hooks, and secondly, a way to easily attach them in the same position each time. As it is, they have to be painstakingly adjusted every time you put them on, and even with practice, the process of unpacking the iSines in order to use them took me at least a minute: insignificant in the context of a long mixing or recording session, but enough to make you use something else if you just want to quickly check something.

While I’m complaining, I’ll get the other major negative of these in-ears out of the way too: they are leaky. As you might expect, the ‘open’ design doesn’t offer significant isolation from external noise, and this in itself doesn’t strike me as being much of a problem. What might be more of an issue is that other people are going to hear what’s coming out of the iSines, and there’s not much you can do about it. I’m not someone who likes to monitor loudly, but even so, the spill from the iSines was annoying my colleagues well below what I’d consider a comfortable listening level.

You’ll need a bit of privacy to crank up the iSine 20s, then, but when you do, chances are you’ll think it worth the wait. They’re not fatiguing or peaky, and as befits a planar magnetic design, they are impressively clean-sounding, without audible distortion. Full-sized planar magnetic headphones often tend to have a fairly subdued high-frequency response, but the iSines come across as being crisp and lively. The faff involved in attaching them means it’s hard to A/B them with other phones, but my impression was of a slight emphasis towards the lower half of the mid-range, accompanied by a noticeable lift somewhere in the 10kHz region. Nowhere do they depart so far from the neutral as to cause problems, though.

Down at the other end, one of Audeze’s big claims for the iSines is that the bass goes much deeper than on moving-coil or balanced-armature in-ears. And, while they don’t deliver the low end with the same magisterial authority as the LCD-Xs, they are certainly capable in that department. The bass isn’t what you’d call prominent, but low-frequency information is conveyed in a way that seems trustworthy and easy to interpret critically. The low-end extension does, however, seem quite dependent on the choice of tips and the exact fit of the iSines within the ear canal.

Perhaps the most distinctive thing about the LCD-Xs is their uniquely powerful dynamic response, which makes other headphones sound compressed and small in comparison. The iSines don’t quite match up in that respect, but nevertheless, they are certainly punchy and involving. All in all, from a purely sonic point of view I think they stand up pretty well against many full-sized headphones in the same sort of price bracket, and for mixing purposes, make a viable alternative to a decent pair of open-backed moving-coil headphones. I’m not sure you could say that about too many other pairs of in-ear monitors.

For me, the answer to that question hinges not on their sound quality, but on whether you’d be better off with a full-sized pair of headphones. Despite Audeze’s amazing feat of miniaturisation, the iSines still give up some of the advantages of in-ear monitors. They’re not robust enough that you would want to carry them around unprotected, and although they’re much smaller than any headphones, their carry case is too large to fit comfortably into pockets. Their size and leakiness means that anyone around you will definitely know you’re using them, even if they haven’t spent an entertaining minute watching you wrestle with the ear hooks. And if, like me, you never find in-ears as comfortable as conventional headphones, the iSines probably won’t change your mind on that score.

Perhaps the best way to think of them, then, is as representing a halfway house between in-ear monitors and traditional headphones. They don’t have all the positives of both, but they are better-sounding than the vast majority of the former, while being much smaller and more portable than the latter. If that’s a combination that appeals to you, the iSines are very much worth checking out.

The iSine 20s offer sound quality to compare with good-quality studio headphones, at the cost of losing some of the traditional benefits of in-ear monitors.