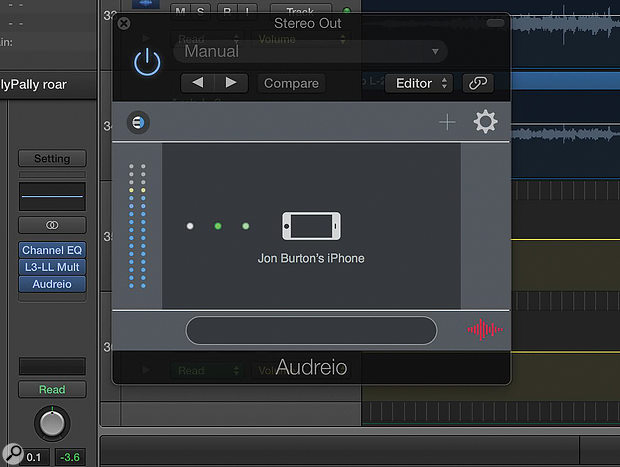 It is sometimes the simplest of ideas that catch your interest. Audreio is such an idea: a way to stream and record audio from a desktop DAW straight to another device, whether it be your phone, your iPad or another computer. You’re probably wondering what’s so special about streaming or sending files — don’t we do that all the time? Well, the USP of Audreio is that it does so from inside your DAW. You can pass mixes, bounces or ideas to other devices without having to leave your DAW, using a plug-in which will stream it either via the Internet or a cable connection. The advantages are ease, convenience and speed. You can stream a mix to a colleague in almost real time; they can listen or record it at their end, comment, make changes and send it back, all within a dedicated app.

The plug-in costs a very reasonable $25, and the app is a free download, so we downloaded it to several iPhones and an iPad within our shared studio. Setup was fast and easy: we have a pretty solid wireless network in the studio and the plug-in found the remote devices without any trouble. In my home studio, where I am some distance from the router, however, the plug-in struggled: setting up a local network on my Mac worked better, and once again, establishing communication was easy. Streaming worked well in all situations. When the network is slow it is possible to adjust the latency of the device to give it more time to stream the data and for the app to capture it before replaying. I didn’t find this an issue: real-time playback isn’t something I think you would look for and even on the slowest latency setting it was still faster than an upload/download scenario.

In this closed network environment Audreio works great. We were pinging tracks back and forth within the building and between devices easily. The quality was good, with Audreio promising lossless 16-bit audio over wireless and 32-bit with a cable connection. The client in the studio that day was able to install the app and use it to hear their tracks, making it feel as though we were adding an extra dimension to our service as audio professionals, and we could also stream the backing track to singers and musicians, who could then go and sit with their iPad rehearsing their parts quietly in the lounge.

Because Audreio can also talk to other iOS apps running on your phone or iPad, it works the other way around too, making it easy to get the audio from those devices into your DAW. The idea you wrote on your phone on the bus? Easy: just bounce it into your DAW via the app. Audreio shows you which apps on your device will work, and there is also an extensive compatibility list on the Web. On my iPhone 5, Audreio took a while to recognise the app I was running — DJay Pro — but did talk to it. I had limited success making the communication work over my home network, but this may well be down to the poor quality of the network.

Audreio can also stream audio over the Internet using the Audreio client, although there is a modest charge for this (currently $0.10 a minute, with the first 30 minutes free). For anyone who needs this service it should provide a reasonably cheap alternative to current options, especially as it is virtually real time, assuming a good connection.

I think this is an app that I could grow to rely on: it is so easy to use as a way of getting mixes to colleagues quickly without the upload/download wait and without having to render files. For this alone, it is worth the modest cost.