Why I Love... Patchbays 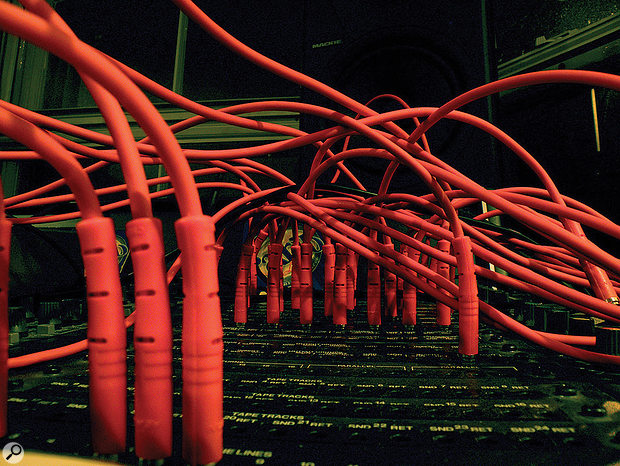 “Nothing, to my mind, represents the harmonious marriage between the creative and the technical quite like a patchbay.”

Computers are wonderful things, and there’s no doubt that they’ve made the process of music production more convenient and accessible than ever. But while manipulating ones and zeroes with a mouse and keyboard from the comfort of your wheely-chair is all well and good, if a little unromantic, sooner or later your music is going to have to meet the real world — and when that time comes, you’ll find no friend more faithful than Mr Patchbay.

Mr Patchbay’s CV ranges from the mundane to the insane. Someone comes into your studio and wants to listen to a track on their iPod? Patchbay to the rescue. Want to plug in a synth without wrestling around the back of your rackmount gear? Patchbay’s got you covered. Got a sudden urge to run your hammered dulcimer recording through a distortion pedal, plug the results into an ‘80s ghetto blaster you’ve suspended from the shower rail in your tiled bathroom, and mic up the resultant cacophony with a five-quid Tandy microphone? Mr Patchbay says “No problem!”

Nothing, to my mind, represents the harmonious marriage between the creative and the technical quite like a patchbay. The rules are simple — stuff goes in, stuff goes out, and you hook things up much like a plumber connects water pipes — but the possibilities are endless. Mr Patchbay is a facilitator: the groundskeeper in the playground of your imagination, the Geordi LaForge in the engine room of your Enterprise. While everyone raises their eyebrows and shares worried glances at your suggestion of running the accordion through a vocoder, Mr Patchbay’s wily eyes and mischievous smirk say, “It sounds crazy... but it just might work!”

Mr Patchbay is that friend who keeps you enthused when all around you is going to pot. When the guitarist comes in and insists on using his nasty plastic multi-effects pedal because he “loves the distortion setting”, Mr Patchbay helps you give the guitarist what he wants, while surreptitiously sneaking a clean DI feed into your recorder. When the fourth member of the three-piece you were expecting arrives and you realise your interface hasn’t got enough headphone outs, Mr Patchbay says “Don’t worry, I’ve got this.” And when the bespectacled oddball hands you a crudely soldered jack from his circuit-bent Speak & Spell, does Mr Patchbay complain? Of course not. Mr Patchbay is a professional.

Even when the motley assortment of musical malefactors finally buggers off for the day, and you’ve at last got the chance to work on your own magnum opus, Mr Patchbay is still there, keenly awaiting your next move. There’s nothing so visceral in the studio as audio made tangible — feverishly yanking out patch leads and jamming them back in again in arcane combinations, cackling like a deranged alchemist while sheets of rain splatter against your window and forked lightning makes ghoulish skeletons of the trees outside — and all the while, Mr Patchbay is goading you, daring you, urging you to rend the laws of physics in ecstatic defiance of musical taste.

So here’s to Mr Patchbay: fixer, collaborator, conspirator and friend, the finest assistant you could ever wish for.