Why I Love... Fretless Bass Skip to main content

Why I Love... Fretless Bass 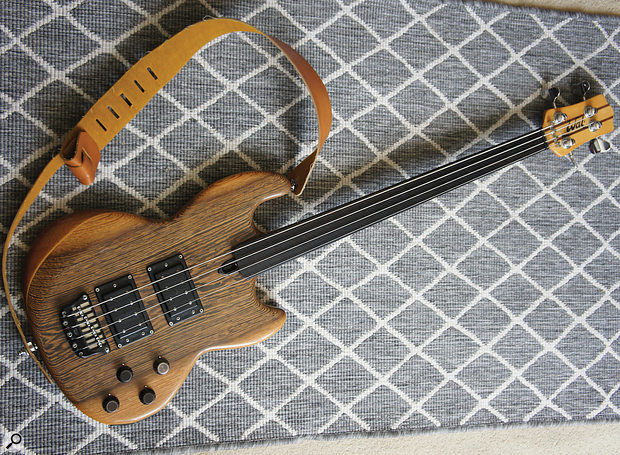 Fretless bass: the instrument that dare not speak its name. It had its 15 minutes of fame in the '80s, when almost every bass player who had caught a glorious moment of Jaco Pastorius in Weather Report or in Joni Mitchell's band had a go at fretless. We know better now, though: fretless bass is gauche, uncouth, unnecessary and dripping with musical cliché. It's a solution that nobody likes the sound of, looking for a problem that nobody's ever heard.

That's a lecture I've heard on too many occasions. But I love fretless bass, very deeply. In particular, I love my 1983 Wal Custom. It's the one possession I would genuinely run back into a burning house to rescue. It's irreplaceable. We've been together since 1983 and I'd be heartbroken if we were ever parted. And that's because my Wal is not just a uniquely great (and now valuable) bass; it's at the heart of why I got involved in playing music in the first place. And now, nearly 40 years later, I wonder what on Earth I would have done if I hadn't discovered how much fun and creative satisfaction can be had making music with other people.

Wind back to the late '70s and early '80s. I'm leaving teenage years behind and, inspired by punk, I and some friends have begun to mess about with guitars. Perhaps driven by wanting to be a bit unconventional, but more likely by thinking four strings must be easier, I decided to be the bass player. "Inspired by punk" however is deeply incongruous, 'cause the music I loved was prog — mostly Genesis and Yes.

I traded in my first fretted bass for a Washburn fretless. What could possibly go wrong?

In gaps between Genesis tours the band's now constantly and unfairly ridiculed drummer, Phil Collins, was one of the busiest musicians around. He contributed to countless records by all sorts of artists and I would always give them a listen, discovering numerous musicians and genres as a result. Collins also had his Brand X jazz/rock/fusion side project, and as a result, I became really interested in jazz. Brand X was a sort of Weather Report with a sense of fun, and the original bass player was Percy Jones, late of Soft Machine. Jones' fretless playing (initially on a Fender P) immediately had me sitting up and taking notice. I adored the sound. It seemed to be wired directly to my insides. The sound made me grin uncontrollably and I absolutely had to have a go, so I traded in my first fretted bass for a Washburn fretless. What could possibly go wrong?

What went wrong was that Brand X occasionally had another bass player, John Giblin, who played a fretless Wal, and the sound of that was like nothing else: to my ears, utterly unique. And then Percy Jones started playing a Wal too. Giblin's fretless Wal began to appear on all sorts of records by the likes of Kate Bush, Peter Gabriel and John Martyn, and now I was both employed in a proper job while also in a sort of Japan‑inspired art rock band (the late Mick Karn of Japan played a fretless Wal), I worked out that if I sold the Washburn and pretty much all of my other possessions, and took out a loan, I could have a Wal too. So that's what I did.

My Wal, hand-crafted by Ian Waller and Pete Stevens in High Wycombe, turned up after a frustratingly long wait in May 1983, and it was everything I hoped it would be. Suddenly I could, for the odd moment, sound just like Percy Jones and John Giblin. I'd never have their talent or technical ability (I still don't) but I could play it in tune (usually) and make some very similar noises. The Wal gave me a musical voice, and a world of creative expression opened up.

Though I'm not using the Wal much in my the musical projects at the moment, hardly a day goes by that I don't pick it up, and hey, fretless bass will have its time again. I'll be ready.