Why I Love... Guitarists 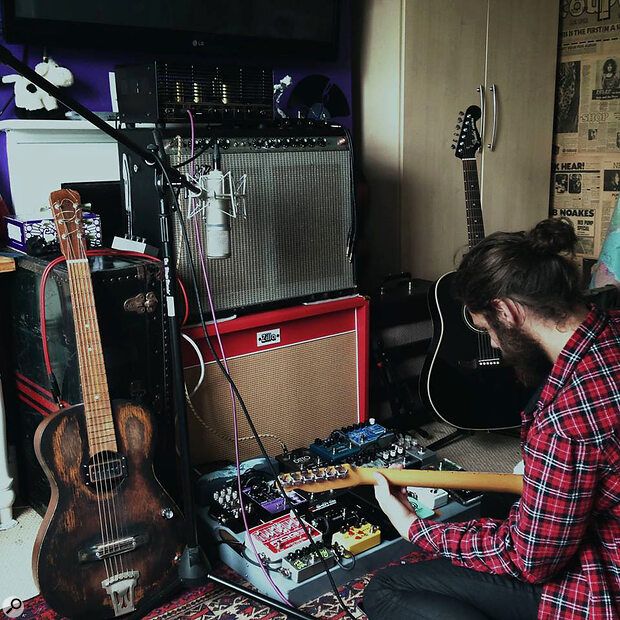 The electric guitar — has there ever been an instrument so identified with rebellion, with danger, with transgression? Think of your favourite electric riff now, feel that unfolding in your brain, like point‑to‑point lightning. And yet...

If you DI an electric and listen to it as is, with zero EQ, it’s hardly world‑shaking. It’s clanky, it’s dull, it’s a step below rusty, crusty egg‑slicer. So, by necessity, one core of being a guitarist is in deciding how you’re going to shape that initial uninspiring ‘sphlang’. Guitarists are forced, from the very start, to think of their instrument as the starting point in their timbral adventure, not the end.

I’m a lifelong synthesist. I’ve spent decades lusting after one New Dream Synthesizer after another. When I finally mug my credit card and buy the piece of glowy gear that will solve all my problems forever, I plug it in and start twiddling. If there are built‑in effects, I snarl and switch them off, for am I not A SYNTHESIST? I care only for the tone of the bare oscillator; I seek the gnarl in the waveform. My new synth, with only one oscillator (and maybe an amplitude envelope if we’re being bouji), should rule, or it is terrible and awful and an insult to synthestry.

In a synth review I put on YouTube, I had the effrontery to put an MFB Dominion 1 through a Big Sky reverb. The gnashing of synthesist teeth was fearful. “ANYTHING SOUNDS GOOD THROUGH A BIG SKY!!!” “THIS IS CHEATING!!” This, even though I played the synth bypassed of all effects too, bare to the world. It appears some people think synths+effects is some form of aural larceny.

Can you imagine that kind of comment on a guitar video? “AN AMP AND CAB IS CHEATING! WE WANT THE DI SOUND!!” “DISTORTION IS CHEATING, WHAT DOES IT SOUND LIKE RAW?”

Guitarists are forced, from the very start, to think of their instrument as the starting point in their timbral adventure, not the end.

Here’s my point: if it sounds good, it is good. I don’t care if it’s a vintage Moog or a plug‑in, if it’s naked or has 20 effects on it. How does the sound we’re creating serve the piece of music in which it is placed? Also, if you think a certain pedal makes everything sound like a super‑expensive synth, would it not make more sense to buy that pedal and use it on budget synths rather than blow all your money on one monster keyboard?

Synthesists: we need to be more like guitarists. Yes, the original tone is important, but if you aren’t embracing the creative possibilities of a crapload of effects, you’re limiting your palette for no good reason. Instead of buying that Next Dream Synth, take half that money and spend it on guitar pedals and effects plug‑ins, and I bet you’ll have more fun, be more inspired and create more new sounds.