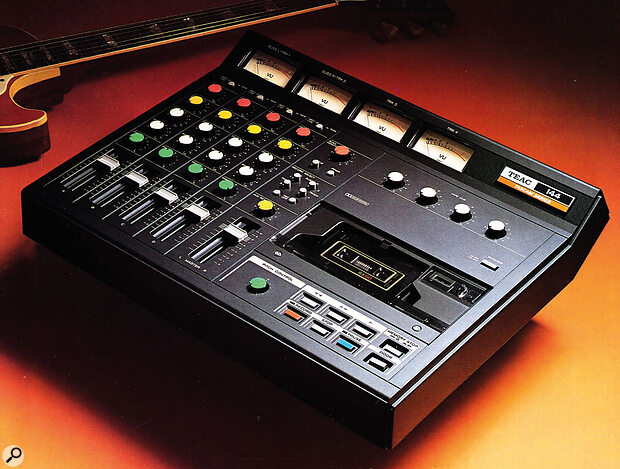 I’m addicted to YouTube. A couple of weeks ago, its slightly scary algorithms coughed up a video clip from BBC TV’s 1980s ‘new technology’ programme Tomorrow’s World. This clip featured Michael Rodd exploring the original TEAC/Tascam Portastudio 144 (see https://youtu.be/fPFPGjhIUUo). It brought a smile to my face and a tear to my eye. If there was ever a single device that enabled the home recording studio revolution, the humble TEAC 144 was it.

It was also the starting point for my own fascination with recording technology; back in the day, I owned a second‑hand one. Four tracks of audio recording onto a standard cassette tape, simple two‑band EQ on each channel, pan and a single send (if you were lucky enough to have an external reverb or delay). It was easy to use but noisy, the tapes wore out and, once you started track bouncing, mixing became a bit of a nightmare. Even so, it was magical.

Thankfully, my own catalogue of 144‑based recordings has long since met a suitable end. However, with the right musical talent and some very good songs, you obviously could do a decent job with it; Bruce Springsteen’s 1982 album Nebraska was apparently recorded on one. (After the likes of Born To Run and The River, that’s quite a testament to what the TEAC 144 was capable of.)

A modern DAW would seem like science fiction to someone who has only ever experienced a cassette multitrack. Watching that Tomorrow’s World clip provides a useful reality check in terms of how far personal recording has come. Unlimited MIDI and audio tracks, virtual instruments, virtual effects, comprehensive mixing with automation and total recall, pitch‑correction, tempo‑matching, surgical editing... the list could go on. It’s easy to take for granted just how powerful our current recording systems have become.

Today’s DAWs are an absolute wonderland of personal recording technology.

I’m lucky enough to have used almost all the mainstream DAWs over the years. Debates about which is the ‘best’ DAW (it depends upon the user, their needs, workflow and budget), or complaints about the lack of a specific feature (any limitations are trivial compared to that TEAC 144), leave me shrugging my shoulders. Installed on a suitable computer, almost any modern DAW is, frankly, capable of amazing things.

I’m a long‑standing Cubase user. It is the heart of my studio and I spend hours with it during a typical working week. However, when I get shipwrecked on that desert island that only happens to have Logic or Pro Tools or Studio One or Digital Performer or Reaper, I’m pretty sure I’d cope; music would be made and the occasional missing feature is not going to be what decides whether the end result is good music or bad music. I had a blast with my TEAC 144 and learnt a tremendous amount from using it, but I fully appreciate that today’s DAWs are an absolute wonderland of personal recording technology. I love my DAW — and if I had to use your DAW, I know I’d soon learn to love that too.