Why I Love... The Electric Guitar 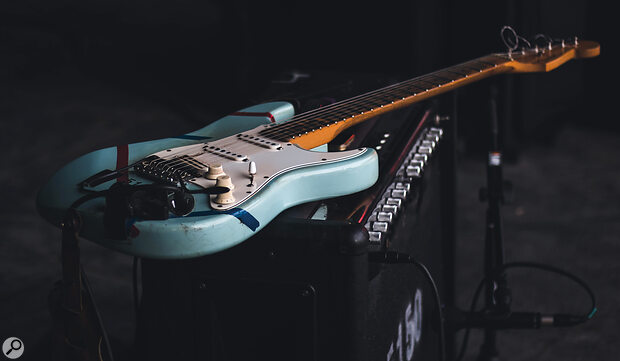 In my latter few years at school I was the drummer in what was a more than decent local band in my home town of Barnsley, but I also had an interest in electronics, which lead to me building simple treble boosters and fuzz boxes for our guitarist. I managed to pick up some very rudimentary guitar playing tips from him and set about tackling ‘House Of The Rising Sun’ on a very nasty acoustic guitar with an action like a suspension bridge. However, it kept me interested to the point that I bought a secondhand Futurama electric guitar so that I could test the effect boxes I was building.

When I moved to Malvern to study electronics with ‘The Ministry’, I took my drums with me but soon traded them in for my first proper electric guitar: a very early Gibson SG Les Paul Junior. Since then I’ve been on a journey of discovery, buying and selling instruments and, more recently, building my own from reclaimed furniture and mahogany window frames. The lovely thing about electric guitars is that you can tweak them to your own preferences in terms of both how they feel to play and in what features you add to them.

By the creative use of pedals and plug‑ins, the guitar can produce a huge range of sounds, many of which can’t even be identified as coming from a guitar.

In the studio I create a lot of quasi‑ambient/chill music under the Cydonia Collective name, in collaboration with local musician Mark Soden and with odd guest contributions from acoustic legend Gordon Giltrap and vocalist Alice Rose Wild. In almost all cases, the electric guitar plays a pivotal role and often takes the main melody part.

By the creative use of pedals and plug‑ins, the guitar can produce a huge range of sounds, many of which can’t even be identified as coming from a guitar. For example, I converted a budget Epiphone LP Junior guitar to a six‑string fretless, which sounds amazing played with an eBow as I can get synth‑style pitch slides and infinite sustain, neither of which is natural for a guitar. Eventide’s Physion plug‑in or the EHX Attack/Decay pedal can add a slow attack to a standard guitar to produce bowed sounds, while adding a shimmer reverb produces a lovely pseudo‑string sound.

Of course you can also mic an amp and get the full range of conventional guitar sounds, from clean to full‑on rock filth, all with a degree of touch responsiveness that keyboard players can only dream about. If I need a new instrument or need to modify an existing one, my ‘man cave’ workshop adjoins my studio: already I have put together a fretless bass made from a discarded fretted bass neck and some reclaimed snooker table; a sitar guitar; and a couple of three‑string cigar‑box electrics, one set up for slide and one for picking. My latest purchase is the Aum Vibraslide [reviewed by me in SOS September 2021], and it will be interesting to see where that takes me!