Why I Love... Keytars 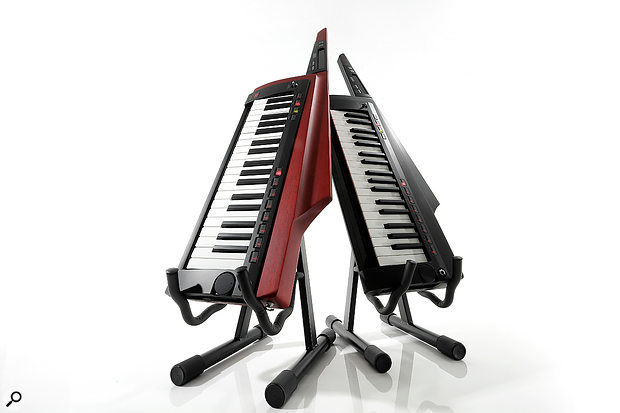 It's fair to say that keytars have had bad press over the years. It's my view that this malicious campaign was started by guitarists, who felt threatened by the fact that keyboardists could now 'widdle' at the front of the stage. Before this, we had been hidden behind keyboards and modules, wired in and barely able to move. The only way we could express our showpersonship was to jump up and down on the spot, or sport an eye-catching, spangly cape. Keith Emerson did try to move more by spinning his Hammond around and throwing daggers at it but, unsurprisingly, this sometimes ended in mishaps.

Imagine the utter delight of keyboardists across the land at the announcement of a portable instrument. Finally we could roam the stage, put our feet up on the monitors, maybe even go busking — something we hadn't been able to do easily before.

Of course, keytars in various forms have been around since the '60s, and in the early '80s we were treated to the Moog Liberation and Roland SH‑101, but it was with the introduction of the Yamaha KX‑1 that things really started to get exciting. Yes, some of the new breed looked like toys and this is how many musicians viewed them (and still do). But keyboardists could see the potential immediately, and they were soon adopted by many chart acts of the day. New Wave, synthpop, electro and glam-rock bands put on their finest frills and pouted on shows like Top Of The Pops while flaunting their keytars. Fun times!

But in the background there was a more serious set of musos with a jazz background that were also adopting the keytar. We're talking George Duke, Herbie Hancock, Stevie Wonder and Patrice Rushen. These musicians played the hell out of their keytars and left those of us that followed them with our jaws on the floor. Suddenly it became all about the musicianship — we wanted to solo like these guys and started frantically learning our modal scales. So yes, if you see keytars being used in mainstream pop, it can appear a little gimmicky. The real fun is in seeing them played with skill.

Owning keytars has got me a lot of work over the years. My first one was a secondhand silver Yamaha KX‑5 that quickly secured us both a spot in a busy corporate band, thus allowing me to become a full-time musician pretty early on in my career. It was battery-powered but I was still tethered by a MIDI cable. An industrial-strength lead with a lifetime guarantee helped to avoid calamity.

Yes, if you see keytars being used in mainstream pop, it can appear a little gimmicky. The real fun is in seeing them played with skill.

Next was the Roland AXIS‑1 in bright red. It was a joy having full-sized keys, although this increased the weight considerably. Also I was now tethered to two cables: MIDI and the power-supply cable that attached to a footpedal unit. I often ended up dragging this unit across the floor and had to use copious amounts of gaffer tape to secure it.

Finally I invested in the Roland Lucina. Now I had full-sized keys, battery power and onboard sounds, which meant that I could use a wireless system — freedom at last! This has been my sole keyboard on many gigs abroad due to the fact that it's small and lightweight, fitting into plane overhead compartments easily.

So no matter what people's opinion of them, I'm always going to love keytars and will always have at least one in my setup.

Atheen has a number of single releases lined up with guest performances from some of her favourite artists in the Jazz/Funk genre.