Why I Love... The Acoustic Guitar

"With its unique voice and rich timbre, the acoustic guitar in the hands of a creative mind has unlimited possibilities."

I've always enjoyed listening to artists do acoustic versions of their songs — stripping them back to the bare bones, and playing the songs in their raw, unadulterated form. It's an experience like no other, and very much unlike listening to a full band version. There is something magical and unique in hearing a song in this acoustic format. 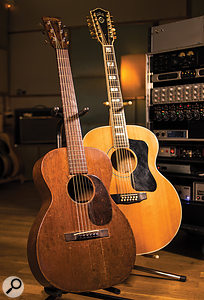 The acoustic guitar is one of the most versatile stringed instruments: a far cry from the electric guitar, where in order to hear it properly, or to perform in front of an audience, you need it to be plugged into an amplifier or a PA system. The acoustic requires no such output source. You can play it anywhere and any time. It is also easy to carry around and travel with, and takes up minimal space.

While the acoustic guitar has played a pivotal role in music history, it has traditionally been just an accompanying instrument, as evidenced by the folk explosion of the 1960s. It wasn't until the early 1990s that the acoustic guitar came into its own, when the MTV Unplugged scene took off. Where previously it was more of a background instrument, its place is now at the front and centre of the music. In recent years, popster Ed Sheeran moved the acoustic guitar not only to the fore, but to the foundational centre of all his music. With nothing more than a simple acoustic guitar (and the addition of a few effects pedals) he managed to turn a one‑man show into a stadium event.

With its unique voice and rich timbre, the acoustic guitar in the hands of a creative mind has unlimited possibilities. In the studio, the acoustic offers a world of unexplored sounds and textures. Yes, electric guitars (and pedals) offer unlimited possibilities too, but recording an acoustic presents more of a challenge. While miking up an electric guitar amp and letting loose may be about capturing that energy and power onto tape, recording acoustic guitars has to be approached with a totally different mindset. For example, when setting up an acoustic guitar with a mic in the recording space, the instrument is at the mercy of the environment, its own timbral qualities and the technical abilities of the guitarist. Personally, this provides much joy for me when I'm in the studio. With just an acoustic, my creativity comes to the fore. How do I approach the arrangement? How do I approach the playing? How do I make my guitar sound huge? These are questions that always run through my mind.

As a songwriter, I believe that if a song can stand its ground on the acoustic guitar, then moving it to an electric setting is only going to further enhance the song and shift it to a different level. But if a song cannot survive the acoustic environment, then nothing — regardless of what is added later, whether that be more instruments or studio gadgetry — will serve the song's betterment. A good song will shine in its rawest and most basic form.

So next time you're cranking out those killer riffs on your electric, unplug, reach for an acoustic and pick and strum away. Who knows what inspiring place it may transport you too?

Joe Matera's latest all‑acoustic release, 'Waiting For The Sun', is available now on Spotify and on his website:  www.joematera.com