Why I Love... Writing For Big Band

“...in a big band arrangement the goal is not simply to play the song with a big band, it’s to imagine something unique with it.”

People are often confused when I tell them that I have a big band. They ask a few questions and when they invariably get to “how many people in the group?” and I tell them 17, everyone, without fail, replies “wow, that is a big band.” 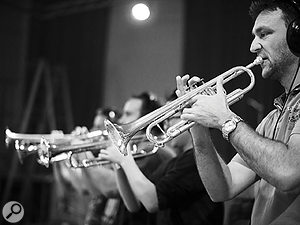 I sense their befuddlement as to why big band is my go-to format. They probably think I went to music school and studied the genre inside and out. They might believe that I’m some kind of purist who thinks it’s the only kind of music. Or perhaps they guess that I grew up steeped in the tradition and haven’t been able to break away.

In fact, none of those are true. I fell into writing for big band practically by accident and relatively recently. It was while writing a tragically unconvincing big band cue for a cartoon that my obsession with the genre began.

So why do I love it so much? For one, there’s almost no limit to the stylistic range of the large jazz ensemble. Orchestral-influenced arrangers like Gil Evans and Maria Schneider offer one dimension, while artists like Brian Setzer demonstrate retro over-the-top swing. Rock, funk, pop, latin, samba: virtually no style is off-limits for interpretation and realisation with the big band.

While there are no style restrictions, there is a limit to the number of musicians. And I love that. You need to make your arrangement work with the 17 players allotted. Overdubbing is cheating. If you can’t make it work within these confines, you’re not doing your job. Helpfully, jazz players are also usually available and enthusiastic about playing new compositions and arrangements. Putting together a rehearsal with a competent cast to run down your tunes is surprisingly achievable.

I’m unsure if other arrangers feel this way or if it’s my own belief, but interpreting and arranging a song can be as compelling as composing one. There’s an art to it. Making something new out of something old is what music is all about but in a big band arrangement the goal is not simply to play the song with a big band, it’s to imagine something unique with it.

The last point about why I love writing for big band is not exclusive to the form, however, it isn’t seen as often in popular styles. A good big band arrangement (while having its fair share of formulae) isn’t as straightforward as verse/ chorus/ verse/ chorus/ bridge/ chorus/ chorus. A solid arrangement offers very few repeats. As a matter of fact, the arranger’s skill is evident in how they manage to repeat sections without repeating anything.

A solid large jazz ensemble arrangement takes you on a journey. You’re left with a melody in your head but it can be a bit elusive because you haven’t been hammered with a chorus a half dozen times.

Like a good storyteller, a skilled arranger holds your hand through the piece. Sometimes you’re unsure where it’s going or what you need to be paying attention to. But by the end of the five-minute odyssey, the trust hopefully pays off.