Why I Love... Batteries 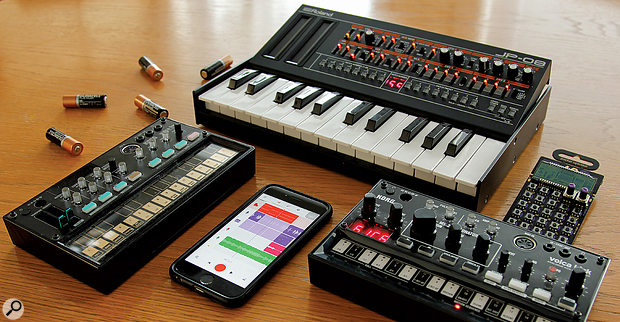 “I’ve loved standalone sequenced synths and grooveboxes since coming late to the Roland MC202 and Korg’s Electribes. But the computer always seemed the way forward...”

For a long time I thought I’d make music when I got my studio back up and running. Then I did and... I didn’t. Family life and day job were rarely compatible with hunkering down in a music room, and what time there was I inevitably squandered on updates and iLok whack-a-mole. Then I got a Novation Circuit, and a way forward started to take shape.

I’ve loved stand-alone sequenced synths and grooveboxes since coming late to the Roland MC-202 and Korg’s Electribes. But the computer always seemed the way forward, promising limitless possibilities in one portable device. I jumped on Reason when it came along, and spent months with friends sampling the treasure trove in our favourite London studio, then flat-packing it into a Refill. Continuing the dream of a completely portable studio I dived into Maschine, then Push. All are great for sitting down to a dedicated session, but the laptop tether was always enough of a barrier to stop me picking them up for a casual noodle like you would with, say, a guitar.

Then, while reviewing the Circuit and Akai’s MPC Live I noticed that I was actually making music. On the sofa; in bed; in hotel rooms; in my in-laws’ garden, and not (just) because it made for good Insta.

Thus began an obsession with self-contained, battery-powered music gear. My weapons of choice became the Circuit, Teenage Engineering’s OP‑1, a Zoom R16 mixer/recorder and handheld recorder, and an iPad running SMPLR, backed up by a couple of dozen rechargeable AAs on rotation. And occasionally a guitar.

To add something a little more analogue to the mix, Korg’s Volcas would have been a natural next step, but I found a couple of loopholes to let me cast the net wider. First, after hours clocked up on Amazon and YouTube, I found a USB charger with a 12V 2A DC output. I got this to power my Zoom F8 field recorder (which chews through AAs at a pace), but found it works with many other bits of kit. Mostly it’s replaced the wall-wart of my beloved Make Noise 0‑Coast, but has recently been keeping me AC-free with the Elektron Digitone and Arturia Drumbrute Impact too.

And if that still feels restrictive, I found a whopper of a battery pack (27,000mAh) that has a 100W AC plug outlet on it alongside the usual USBs. My current distraction is wondering how long that would keep an Octatrack going.

I love that the individual pieces can be used on their own or in combination, depending on time and space. I can grab a few minutes with the Circuit or Digitone and generate some patterns and ideas. If a bit more time or luggage space opens up I’ll clock things together and plug into the Zoom multitrack for something more substantial.

Of course the laptop counts as a battery-powered device, but I’ve mostly kept it shut lately. This has been facilitated by Retrokits’ RK005: a tiny MIDI host and clock translator that lets my USB and MIDI devices commingle. The laptop still comes with, but is mainly used to capture ideas into Live, or to import multitracks from the Zoom for a quick on-the-go mix in Pro Tools.

As it turns out, what started as convenience highlighted that I just don’t get on that well with making music on a screen. I find jamming and arranging more fun when separated from production and mixing, and I’m freed from the specialised studio environment. So get charged up and cut the cord. I haven’t looked back.