Why I Love... Soldering 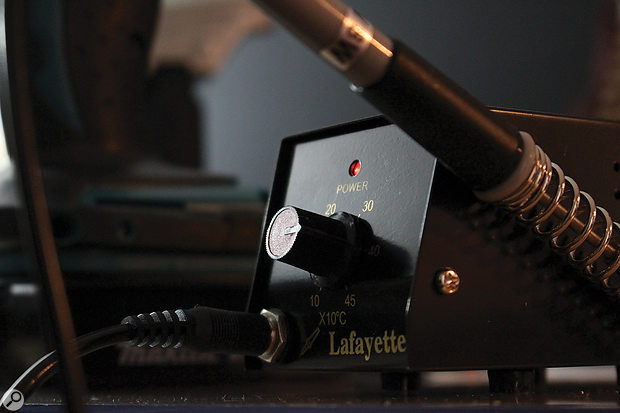 There's something wonderful about getting up to your armpits in the guts of a machine — although, when we're talking about soldering electronics, it's more about getting up to your fingertips. It may be small and close work, but in your mind you're wrestling with a machine of epic proportions. Every stroke of the soldering iron is a two-handed slash and every blob of solder is a cascade of lava splashing against the foe. My mind wanders when I'm soldering. But that's the joy of it, the mindfulness of it: your own personal ASMR–fused environment of smallness, care, focus, and intention. I am building a machine.

Of course, I'm not really building a machine. I'm assembling parts using crude tools to complete a flow of electrons on predetermined paths: something that could be done far easier and quicker by another machine. Soldering is self-indulgent, and burns through time as though I have an abundance of it to spare. Nevertheless, it makes me feel like I am part of the creation of an instrument, like a craftsman, an artist. My slightly shaky hands and poor technique are contributing to the further adventures of my Eurorack habit, and as I breathe the fumes, I wonder which frailty will get me first.

My mind wanders when I'm soldering. But that's the joy of it, the mindfulness of it: your own personal ASMR–fused environment of smallness, care, focus, and intention.

I had never intended to build anything when I started my journey into Eurorack. Getting into the guts of modules was for engineers and enthusiasts who seemed to speak a whole other language and have cases held together with gaffer tape and Blu‑tack. But my desire for a Music Thing Turing Machine pushed me into dusting off that old soldering iron and giving it a go. It was deliciously easy and completely engrossing. It had elements of danger, areas of the unknown, moments of drama and then the sweetest feeling of absolute joy when it powered up and started to function. I built it. I made it work. Those LEDs are lighting up because I put enough solder in the right place. It's a simple victory: I triumphed over technology and have power over electrons.

I was bitten. Over time, I acquired a better iron and some much better solder which smoothed away many of the early frustrations. My confidence grew to the point that tackling surface–mounted components was not the horror I was led to believe. I found a way to do it with just a pair of tweezers and my trusty iron. I like to keep things simple and push back against well-meant advice on PCB ovens, heat guns and solder paste. Armed with a pair of ridiculous magnifying goggles my dad found neglected in his garage, no job is too small.

Each kit is a new endeavour. Each PCB is scanned with uncomprehending eyes as every soldering session teaches me nothing more than how to solder. I've no idea how these pathways connect or how the components influence the outcome — but by golly, the time spent poring over it is complete and utter bliss.