The Psychedelic World Of Kevin Parker By Tom Doyle 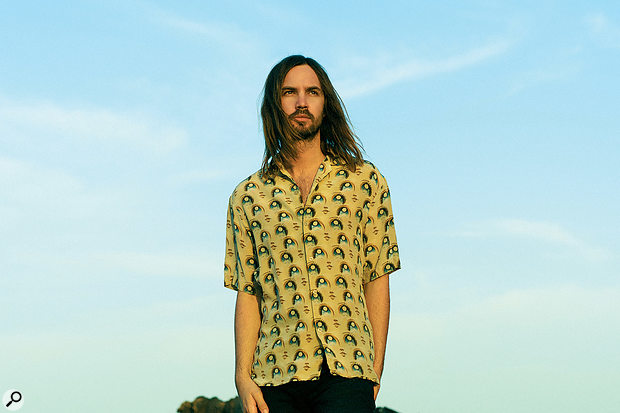 No two Tame Impala albums sound the same — but they've all been driven by the same experimental ethos.

Over the course of nine years and four albums, Kevin Parker, trading as Tame Impala, has made huge sonic leaps from his 2010 debut Innerspeaker's modern reimagining of '60s guitar-based psychedelia to the electronically coloured, kaleidoscopic pop of The Slow Rush in 2019. Growing from a bedroom project to one now operating out of Parker's elaborate beach-facing studio in Freemantle, just outside of Perth, Australia, Tame Impala remains a solo recording project, but expands live to a five-piece band.

Parker has chalked up two Top 10 albums in the UK and the US with The Slow Rush and its 2015 predecessor Currents, which successfully located the unexplored middle ground between Pink Floyd and Michael Jackson. At the same time, the 34-year-old has earned a well-deserved reputation as someone deeply involved in audio experimentation, through what he's previously described as the "juxtaposition of sound quality", mixing high-end sonics with lo-fi.

When SOS connect with Parker in Freemantle via Skype, with Western Australia in lockdown and all of his touring postponed, he is back to doing what he loves the most, namely spending all of his days and nights recording. "I feel as if I've been tooting my horn about loving working in isolation my whole career," he grins. "Now that this whole thing's happening, I have to go and put my money where my mouth is."

As Tame Impala's success has vastly increased, so has Parker's collection of gear, with his studio now equipped with an array of vintage preamps and compressors and a Studer 963 mixer. While having an inherently rebellious attitude towards accepted engineering techniques, he admits he's now doing things more by the book, as well as continuing to bend and break the rules.

"I rejected those kind of accepted techniques, but I've been interested in them recently," he says. "Just because it's something new. I was afraid of learning new things, from a narrow-minded perspective. Or just because I didn't want it to sound like how everyone else's albums sound." 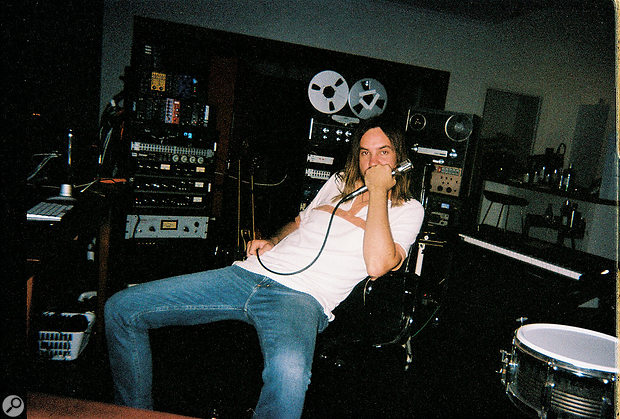 Kevin Parker at his studio near Perth, Australia.

Kevin Parker's fascination with recording was sparked by his discovery, at home at the age of 11, that he could record himself playing drums on to a cassette using the family hi-fi system. Then, in a crude form of overdubbing, he'd tinker around on a Casio keyboard as the drum tape played in the room, recording the combined results onto a second cassette deck.

"I didn't even know how to play keyboards," he stresses. "I was playing with, like, one finger. But I had this kind of epiphany, listening back to myself playing keyboard over the top of drums. I just thought it was so magical. Also, because, in my 11-year-old naivety, I thought I was the first person to ever have done that (laughs)." At 16, he was given the gift of a Boss BR-864 8-track digital recorder by his parents. "I was cleaning some stuff out in the shed the other day and I came across it," he says. "It's the first time I've held it in my hands in years. It was almost kind of emotional, 'cause it's got bit of gaffer tape on it, and the dirt around the record button.

"There's no other piece of equipment I have that I've used as much as that thing. Like, just every day, every night, with a pair of headphones. I was using the EQ and compressor without even knowing what those two things were. Just spinning the dial."

Two years later, at 18, as the guitarist in a band who came second in a competition, winning a day at a top Perth studio, Parker became instantly disillusioned by the experience of working in a professional recording facility.

"We were making kind of like '60s music," he explains. "And it sounded like absolute crap. I guess from then on, I always had the naïve opinion that if you did it like everyone else did it, it'd end up sounding like that. So, I kind of shut that whole world out and just did it myself."

As Tame Impala, Parker first began uploading home recordings to MySpace in 2007, signing to Sydney-based indie label Modular Recordings the following year. Given the budget for the debut Tame Impala album, Parker began buying up bits of equipment, upgrading to the Boss BR‑1600 digital 16-track and recording the live-band-sounding album alone — aside from drummer Jay Watson on two tracks and bassist Dom Simper on one — in a secluded beach shack.

"It was kind of scary," he admits. "I was like, 'Uh oh, I've got to make something commercially viable on what is essentially a home recording thing.'"

One key purchase for the album that was to become Innerspeaker was a dbx 165 compressor, partly responsible for Parker's crunchy, John Bonham-like drum sound on the record. "I probably just eBayed 'vintage compressor'," he says, "and that was the first thing that came up and it was available in Australia. To this day, it's my favourite compressor."

To finish Innerspeaker (and also 2012 follow-up Lonerism), Kevin Parker flew to upstate New York to employ the mixing skills of Dave Fridmann (the Flaming Lips, Interpol) at his residential Tarbox Studios. "I can't imagine the amount of restraint and open-mindedness that he had mixing an album that some kid had brought in on a digital 16-track," Parker says. "He didn't even pull me up on the fact that it was 16-bit. He was completely open to working with whatever weird system I had.

"When I had to bounce a track out, it wasn't like you just plugged your 16-track into a computer and then accessed the files. You had to click the export button and wait 10 minutes for it to process a WAV and spit it out, which you could take out one by one. That was the system of getting it on to his Pro Tools computer. Which again he was never impatient about."

Fridmann's famously experimental attitudes towards sound were to influence Parker's future approach. "To this day, I think about his processes a lot when I'm working. He's able to eject what he doesn't value, y'know. But he's still able to be a madman in the studio [laughs]. He values a good preamp and all that kind of stuff, but he also values destroying it at the same time. Which I think is commendable. 'Cause it's easy to get lost down the rabbit hole of the price of gear."

Kevin Parker: "I'll do anything for evocation. Anything. I'll forsake everything else to just do something that transports me. Even if every classy bone in my body and my inner rock & roll producer is screaming.

Dave Fridmann, however, gently encouraged Kevin Parker to think beyond his Boss 16-track and Tame Impala's tour photographer introduced him to Ableton Live when the band were on the road.

"He installed it on my computer one night and I didn't leave my hotel room for days," says Parker. "I was putting flanger on the whole mix as soon as I had it. I was automating like someone on drugs [laughs]. Yeah, it was an awakening, for sure."

As a result, Lonerism was a completely different-sounding album to its predecessor, introducing layers of synths and warped audio. "I guess the sound of Lonerism is me having an unlimited amount of tracks," he says. "It's a celebration of possibilities."

Recorded in a house Parker was sharing at the time with friends, and where he had rented a second room as his dedicated studio, Lonerism is perhaps best represented by the photograph on its back cover, where he is pictured lying on the floor amid a mess of synths and drums and tangled cables. He remembers it as a "period of discovery", where he would spend months working on particular drum sounds using his '60s Ludwig kit.

"It's just my favourite thing to do," he enthuses. "I love the chase almost as much as finally getting that drum sound after days of just thinking, 'This is absolute crap.' Then suddenly tweaking something and it's the drum sound you've always dreamt of. That, for me, is on the same level of satisfaction as writing a song that you think could be the best song on the album."

On Lonerism, Parker made endless explorations into minimal drum miking, with two Shure SM57s on kick and snare and a Rode K2 valve condenser as an overhead. "What I was into then were those really kind of boxy, '60s drum sounds," he says. "I didn't want to use the kick drum mic everyone else was using. It's so kind of stupid and rebellious, looking back. But with blown-out '60s psychedelic drums, they don't need that definition on the kick. It's this kind of pitter-patter in the background. I wouldn't use a 57 on the kick drum these days, but a 57 will still pick up 60Hz. You just won't get that impact." Synths-wise, Lonerism was made using mainly a Roland Juno-106 and a Sequential Circuits Pro One. Parker bought the latter after visiting his friends' studio and trying one out. "I played a few notes and I just had this emotion, y'know. Like, it made me want to cry. It had the portamento on and it was like a long sawtooth note. I was just like, 'Oh, this sounds heavenly.' So, I bought a Pro One. Again, to this day, it's probably my favourite monosynth, easily.

"The Juno is just instant and you feel like you're in a movie when you're playing it. Y'know, you feel you're in the soundtrack from any of those classic kind of '80s movies. I love things that are just instant nostalgia. I love anything that's kind of evocative."