Play It Again By Sam Inglis 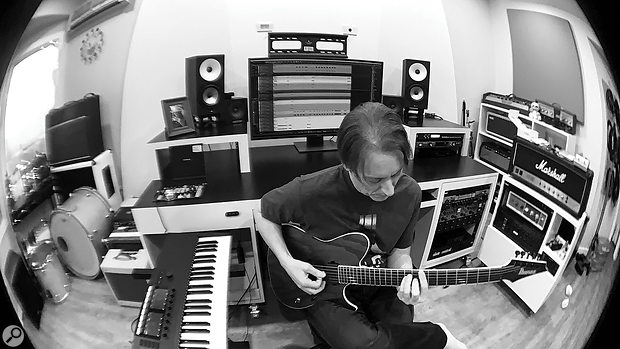 He might not be a household name, but Steve Ouimette has made more people dance than anyone else on the planet!

"Ever since I was a kid, I used to drive my guitar teachers and the other band members crazy," laughs Steve Ouimette, "because I couldn't stand when we played a song the wrong way, so I'd sit there with a cassette player or turntable and play back parts until I could figure them out. Then I learned about the karaoke trick of summing the two-track to mono and flipping one channel out of phase so I could hear parts that might be hidden in the mix."

Steve's perfectionism has stood him in good stead, both as a composer for games and TV, and as the man behind the acclaimed Cinematic Guitars series of sample libraries from Sample Logic. But it's found its full expression in a more unusual specialism, which he estimates as making up around a third of his work: recreating hit songs for use in video games. "It became a big part of my work starting with Guitar Hero III in 2007. Activision/Neversoft hired me to record nine covers for the game — 'School's Out' by Alice Cooper was my test song — and I've been going ever since. I think I've done somewhere around 250-270 songs at this point. A good number of those were with Activision and Konami, but since 2010 it's been pretty much exclusively with Ubisoft and the Just Dance franchise."

The first stage in recreating any track is, naturally, research. "Usually it starts with just listening as much as I can. It's rare that I ever get more than a stereo track, and many of the times it's an MP3 these days. I'll put it on during my cardio workout, before I sleep, while I'm having my coffee whenever I can, to really get it into my head. 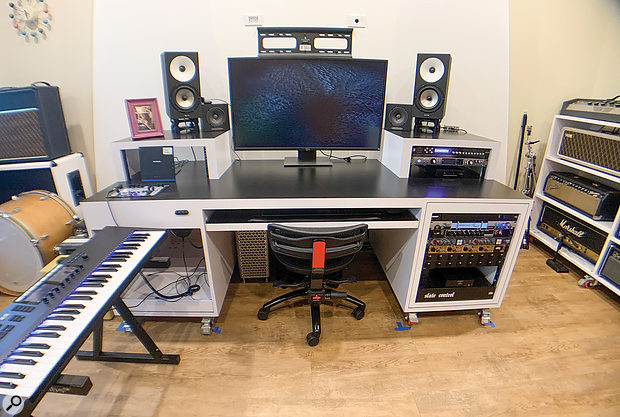 Steve Ouimette's single-room studio is highly tailored to his own needs as a composer and self-recording musician. 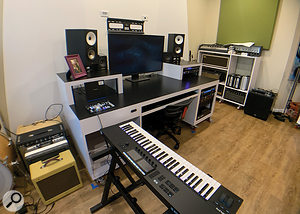 "I use a mix of speakers and headphones. My main monitors are Amphion One18s combined with four HSU 15-inch subs and a Linea ASC48, for a little DSP correction of my room. That's the main listening setup. And then, yes, headphones. I've been using Beyer DT770s, but they're a little bass-heavy for my taste. Still, the isolation can help pick out certain elements because they're right there in your ears. But the Amphions are definitely where I spend 85 percent of my time. Those speakers were a revelation to me. It's almost like they aren't even there it's just music coming at me!

"I also use a program called Transcribe from Seventh String Software that does the karaoke trick as well as slows down tracks, has built-in EQ choices for isolating frequencies and also has a handy tuner in it so you can get the track to concert pitch if they sped it up in mastering. Sometimes a track will come in that's slightly sharp or flat — mostly sharp — so that helps to tune it. In many cases I'll use that to tune the track and instruments to that pitch if necessary. Other than that, I'll use FabFilter Pro‑Q3 and some of the excellent tools from iZotope like Neutron. But for the most part it's just old-school listening with my ears!

"From there it's just a matter of breaking the track down to the most basic elements and going in deep to listen and pick out the details. The Internet has been a huge help, especially as it continues to grow. I'll find out where the song was recorded, who the players were, what mixing console was used, mics, instruments, amps, anything and everything. You sort of become a detective, in that you're always looking for clues as to what they may have used. Interviews and other articles have been very helpful in some cases where I might get a little information from a producer or engineer or sometimes even a tech that worked for the band at the time. Then you work backward and try to eliminate everything that couldn't have been like an AMS RMX‑16 in 1979. Nope, couldn't have been that! One time I was lucky enough to find the original drawing of the layout of the studio and where all of the instruments were placed and miked. That was pure gold. 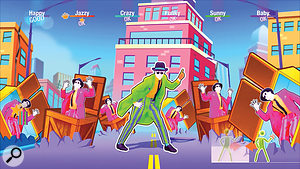 One of Steve Ouimette's many meticulous recreations of classic hits was his version of Elton John's 'I'm Still Standin', featured in Just Dance 2019."Every now and then I'll find a multitrack master online that I can dig into. Man, that's like getting the golden ticket! A couple years back I did a re-record of [Elton John's] 'I'm Still Standin' and found the multitrack online. There was so much I learned from just listening and it did make the job a lot easier. But it's incredibly rare."

In extreme cases, there can even be more than one layer of production to exhume. "Quite a long time back I did a cover of MC Hammer's 'U Can't Touch This', which sampled 'Super Freak' by Rick James. In that case I ended up recreating that section of 'Super Freak' as closely as possible, then sampled it with an Akai MPC to mimic how they did it for the record. In fact, I ended up helping out a classic hip-hop band when they wanted to do a cover of one of their songs for commercial purposes and recreated all of the samples they had pulled from records. That was a really fun project to try to match."

The process of recreating the song always begins with the rhythm section. "I like to start from the drums or percussion — anything that lays the foundation — and it always starts with an accurate tempo map.

"My DAW is Studio One [from PreSonus]. I fell in love with it about four years ago and doubt I'll ever look for another one again. They have excellent tempo-mapping tools that really speed up the process. But no matter what tools are available it's still very listening-intensive to get the map right. Where the software sees a transient may not be the exact spot I need for a downbeat, but it gets me close to start with. Then I tune it by ear until the click doesn't flam with the track and feels good to play to. Then bass, but since I'm predominantly a guitar player I will always look for a guitar part just because it's fun. Then I'll move on to any strings or brass and keys.

"If it's a more modern track it gets trickier because we have so many virtual instruments and synths available that it can be really hard to know what somebody used. That's why the older songs can be easier in that way. It might be a Rhodes or Clavinet, Hammond B3, etc. Now it literally could be anything, and that makes it tough to figure out. Vocals are always last, and I prefer to do all of the background vocals before the lead vocalist sings, so there's a complete track. It's much more inspiring to sing to a good track, and vocals are by far the most important element."