Why I Love... Mountains 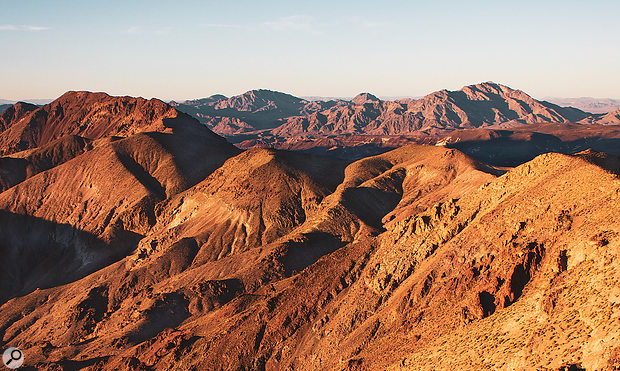 Almost no cell service reaches my home studio. People come here to record, and within moments of arrival, they inform me that they have zero bars... Then a wonderful thing happens: they put away their phones and we get to work.

I live at the edge of civilisation. Look North and you will see Las Vegas, a neon world of 24-hour excess, a funhouse of flash and flesh. Look South and you will see mountains and burning sand, coyotes and cacti. It's 40 miles of desert wilderness until you reach California, where still more desert awaits.

Las Vegas is fast and modern — maybe postmodern — but because I live in the shadow of Black Mountain, almost no cell service reaches my home studio. People come here to record and within moments of arrival they inform me that they have zero bars. This declaration seems urgent. They wander around, lost. They walk over to a window. Still zero. I suggest they stand on one leg. Nothing helps. Then a wonderful thing happens: they put away their phones and we get to work.

I will sound old and cranky here, but I remember when recording did not require incessant calls, text messages, social media posts and selfies. In my travels, I've been to more than one session where someone got a nasty text message that changed the timbre of the entire day. Then there are those attended sessions where an artist talks on the phone while the engineer tries to mix. It's a weird way to eat up your budget.

I remember when recording did not require incessant calls, text messages, social media posts and selfies.

I love living next to a mountain because the cellular isolation clears all that static and allows us to focus. The mountain works like a Faraday cage, except no one accuses me of wearing a tinfoil hat.

It's easy to see the mountain as a metaphor here. A towering range of continental rock is timeless, while whatever people need to blab about at any given moment is fleeting. We record to capture something timeless, don't we? Or at least enduring.

Of course, there's more to love about mountains. The flora and fauna are different up there. The air is clear. Mountains offer detachment, time and space to think. They are also powerful primeval symbols, which is why we see them so often in literature. Protagonists retreat to the mountains to be alone, to look for answers, and to take in the silence. They see their problems from new angles and discover fresh solutions. They ascend. They transcend. If mountains are good enough for heroes, monks and prophets, they can certainly help a humble recording engineer. When I am puzzling over some technical matter, I hike among the boulders and Joshua trees, look out over the city, and the answers come to me.

Meanwhile, down below, Las Vegas is growing. When we bought the house that became my studio, the city seemed far away. It's getting closer all the time, with more homes, new businesses and heavier traffic. The Oakland Raiders will become the Las Vegas Raiders next season, and the team is building a practice facility just a few miles from here. Civilisation is encroaching, and civilisation requires pervasive, invasive, omnipotent cell service. I'm sure it's coming to Black Mountain.

This isolation won't last forever. For now at least, I am still at the edge, still exalting in the solitude.