Why I Love... Photography 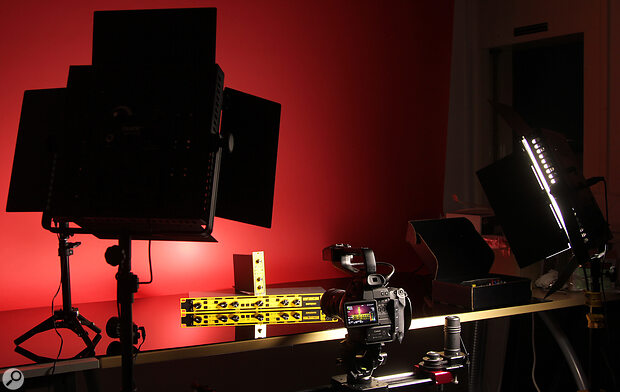 I got into photography completely by accident. In my early 20s I landed a job as a junior staple‑monkey in the offices of an independent music technology magazine, and in between my various admin chores, which included keeping track of all the exciting synthesizers, microphones and mixing desks we had in for review (all toys I desperately wanted to play with), someone handed me a DSLR and told me to take pictures of them instead.

My first few attempts were pretty ropey (no‑one had taught me what ISO meant, or how to adjust F‑numbers, or about the various types of lighting, or about lenses), but before long I’d taught myself enough to become the in‑house photographer, among my many other jobs, at Sound On Sound.

These days, not an issue goes out without at least one of my photos making it into print, and it’s still as satisfying to see my work on the page today as it was when I first had a photo printed, some 15‑odd years ago. The purpose of a magazine such as this is to impart knowledge, of course, but it’s also a visual medium: the prettier a page looks, the more likely you are to give it your attention, whether it’s an advert for some shiny new piece of equipment, or a hi‑res photo of some A‑list mixer’s studio. I’m sure I’m not alone in frequently pausing over pages so I can figure out how someone’s studio is connected, or what model of tape delay they’ve got perched on top of their rack.

Frank Zappa is credited with the fantastic quote, “Talking about music is like dancing about architecture.” Many’s the time I’ve found myself wondering whether taking photographs of microphones is a step too far removed from actually making music, but on reflection I think it isn’t. Because using a camera is a lot like using a microphone.

Recording and photography are akin in a literal sense, of course — both capture a record of an event, a place, a time — and both are also subject to the laws of physics; echoes and reverb are all subject to the same rules of reflection and angles of incidence as light (what’s a few hundred thousand miles per second anyway?). Indeed, having to quickly set up lights, backdrops and a camera in order to photograph something has undoubtedly made me a better recordist, so that by the time I’ve put the faders up, I’ve got my gains and mic positions roughly where they need to be, even before recording — in much the same way as I know where the light will bounce off a brushed chrome studio rack before I’ve opened the lens up.

...good photography, like a good recording, comes from a mix of experience and pragmatism.

But perhaps most importantly, having to learn photography on the hoof, in a less‑than‑ideal room (‘the photo cupboard’, as it was affectionately known), and with whatever equipment I happened to have to hand, taught me that good photography, like a good recording, comes from a mix of experience and pragmatism. The experience helps you get results quickly — which is just as important before a print deadline as it is when you’ve got a tantrum in the vocal booth — while pragmatism is simply knowing when the results are good enough. No‑one wants to hand a crap photo to a graphic designer for them to Photoshop, or a naff recording to a mix engineer, but at the same time, there’s little sense in me spending three hours attaining perfection when it’s a five‑minute job to get there in post — especially when there’s a deadline looming.

Photography has taught me a lot, from both a technical and a creative standpoint. That, and the importance of good stands...