When the record industry moved from mono to stereo in the ’50s and ’60s, it entered a golden age. Fans enjoyed a better listening experience, and the new LP format enabled artists to be more ambitious. Labels profited from massive growth, studios flourished and ‘rock star’ became a bona fide profession. 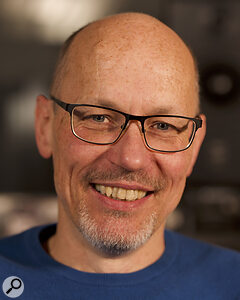 Sam Inglis, Sound On Sound's Editor In Chief.Photo: JG HardingHowever, when the industry tried to repeat the trick in the ’70s, audiences shunned quadraphonic audio. Attempts to popularise 5.1 surround as a music listening format in the early 2000s likewise met with limited success. So, as today’s music business falls over itself to hype ‘immersive audio’, a bit of scepticism is forgivable. Consumers weren’t willing to spend money then in order to hear bits of Pink Floyd coming from behind them, or Super Furry Animals doing circuits of the living room. Why should things be different now?

While it’s too early to pronounce immersive music a commercial success, it would be a mistake to write it off as an attempt to repackage old ideas. One key difference is that immersive audio does away with the obstacles that limited uptake of older surround formats. Headphones are already the most popular listening environment, and immersive music can be consumed on standard headphones, with no need for multi‑speaker arrays or cable spaghetti.

Unlike quad or 5.1, immersive audio adapts itself to any playback configuration, from a smartphone to a cinema. And whereas quadraphonic records and DVD‑Audio discs were expensive premium products, today’s immersive tracks are files just like any other. The industry doesn’t need to charge more for immersive content in order to recoup the cost of specialist manufacturing and distribution. At the time of writing, for example, Dolby Atmos has just been integrated into Apple Music, with no price premium.

Immersive audio is for everyone — and everyone includes you and me.

And this time around, the music industry isn’t trying to bring about a technological revolution on its own. Immersive audio is already universal in movies and video games. It’s widely supported by current ‘smart home’ devices. Multi‑speaker playback systems are being built into new cars, and if your favourite TV shows aren’t already immersive they soon will be. Film‑making and gaming have opened the door and, arguably, all the music industry needs to do is walk through without tripping over its own feet.

Of course there are still wrinkles that need to be ironed out, and on the format side, there are still a few Betamaxes rivalling Dolby Atmos’s VHS. But one of the exciting things about immersive music, compared with previous surround formats, is that it reflects the way in which music creation has been democratised. To make immersive music, you don’t need a colossally expensive digital console, or a huge control room with a ring of expensive monitors. At the most basic level, all you need is some inexpensive software and the headphones you already have. Unlike quad or 5.1, immersive audio is for everyone — and everyone includes you and me.