Why I Love... Distortion 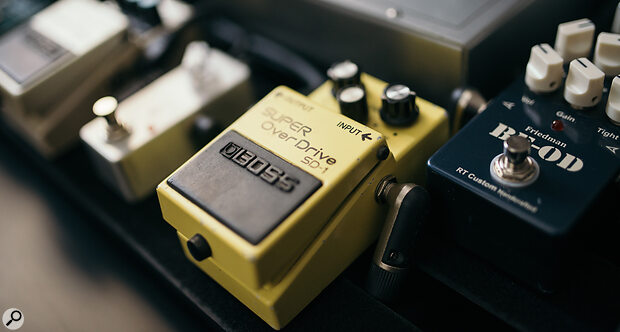 My first experience with distortion was with guitar pedals. There was something amazing about physically stomping on a device that immediately made you sound powerful. It was instant gratification; an ego boost that was amplified for all the world to hear. As an electronic music producer, I enjoy distortion as a practice in remixing. Pushing and pulling something until it assumes another shape entirely has always felt very empowering to me.

During a rough season in life, I discovered Trent Reznor’s Nine Inch Nails fan remix site around 2008, and became a voracious contributor. I had a quiet, conservative persona by day, but at night I would lock myself in my room and destroy things via these remixes. It was my underground production laboratory, and also a stage where I could stand anonymously and rage with every remix I posted. I was a novice in‑the‑box producer with only one plug‑in for signal processing in addition to what my DAW had to offer. I was trapped in a box with limitations, both in real life and my creative life, and it yielded what I still believe to be some of my best work.

During the pandemic lockdown, I found myself in a familiar place: restless, with the need to bust out. Since that wasn’t possible, I again sought refuge in my DAW, this time creating original electronic music that immediately sounded aggressive. The state of the world made me want to break things, but in a safe place. I began recklessly throwing distortion around on different tracks to see what would happen.

Crushing something causes colours to bleed out that you didn’t notice before.

I started in more logical places, dropping distortion on drums. I was throwing guitar stompbox effects on loops and completely trashing the place. This ‘place’ was starting to sound like I felt: just a human trying to maintain some semblance of rhythm, but honestly not sounding OK.

I followed this insane momentum and started throwing these stompboxes on everything. I built a track where I took a bunch of flute samples and crushed them mercilessly until they began to mutate into a melody, like a tiny bird lit on fire, screaming and soaring through my speakers. I was not worried about best practices here, throwing pedals through overdrives and saturators until my signal chain was a crazy personality rearranger. It was sledgehammer sound design, and the results were surprising and cathartic.

It turns out that if you smash something enough, it will start to sing. Crushing something causes colours to bleed out that you didn’t notice before. Amplifying these hues can give pain a melody and purpose. So go ahead and break it. Rearrange it, shift it, distort it. I dare you. These kinds of practices have left me with a wild sense of curiosity as a producer, always on the edge of my seat, ready to see what lurks in the shadows with just a few clicks.