A prototype Vibraslide being used with a lap steel guitar — but it will work with any standard electric guitar.

The Vibraslide is a genuinely unique — and, it has to be said, impressive — take on the guitar sustainer concept. It’s the brainchild of Gareth Whittock, whose Aum Guitar instrument I reviewed last month, and Gareth tells me that the circuitry was designed to his specifications by Paul Vo, who also designed the Moog Guitar and the Wond. After many years in development, it has recently gone into production. It is hand‑built in France and comes in two parts: a glass slide (the hand‑blown glass shell is made by Robert Ashby of the Voodoo Slide company) with some inbuilt transducer circuitry; and a stomp‑pedal‑style master unit that connects to the slide using an included four‑pole, anti‑kink rubber mini‑jack lead.

In some ways, the Vibraslide is similar in concept to the eBow, in that it feeds energy from the strings back onto the strings to keep them vibrating indefinitely. But in others it’s very different. Whereas the eBow houses both the pickup and string drive transducers, the Vibralide uses the output from the guitar’s own pickups as the source. It amplifies the signal and then feeds it back to the strings using the drive transducer in the slide. Also, an eBow can only drive one string at a time, whereas the Vibraslide can drive all six strings if required. (I suspect it might even stretch to a seven‑string, though it’s only built with a standard guitar in mind.)

The pedal requires a standard 9V, 300mA (or higher), centre‑negative PSU, which is not included, and it is recommended that you use one of the more modern switch mode supplies, rather than one which uses a conventional transformer. There’s an On/Off footswitch on the left of the pedal and a polarity‑invert footswitch to the right. Activating Invert emphasises fifths or octaves, rather like the sound of controlled feedback, whereas the normal mode produces the fundamental note of the strings.

...an eBow can only drive one string at a time, whereas the Vibraslide can drive all six strings if required.

Two knobs control the strength of the signal sent to the slide, the Pre knob is used to match the output of your instrument to the pedal’s preamp. Turn this up too high, and the signal will distort — but that in itself can give rise to some interesting changes in harmonic content. The Sus knob to the right adjusts the drive signal being sent to the slide, so you can move between adding a hint more sustain to your natural slide playing to some very assertive, infinite sustain.

Both the pedal and slide are fitted with LED indicators. In normal mode, the slide glows red, while in Invert mode it lights white. To use the system, the guitar connects to its usual amplifier via the in and out jacks on the Vibraslide’s pedal. Two further jacks provide an effects loop, so other pedals or effects units can be used to treat the signal being fed back to the strings. 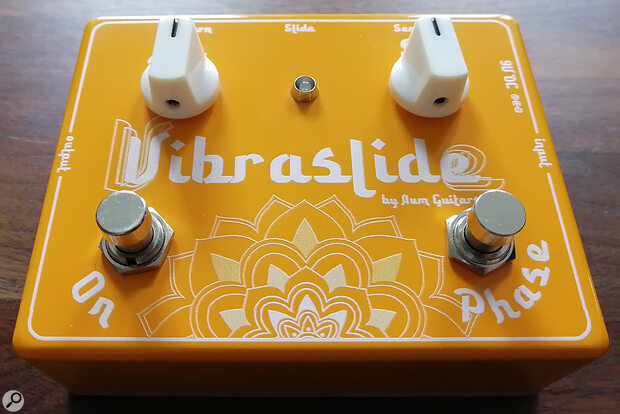 The master unit features an effects send/return loop: inserting a wah or volume pedal gives you far more control over the effect during a performance.

The slide actually produces some low‑level sound in use, and you can also feel small vibrations at higher drive settings; these all come from the transducer and are apparently normal. A raised pimple on the slide houses the LED and should be on top of the slide when in use for maximum drive, as that means the transducer is correctly aligned with the strings. Tilting the slide can produce a change in harmonics so you might want to incorporate this into your playing technique.

If you hold the slide directly over the pickups with the controls set fairly high, you’ll hear a high‑pitched oscillation that can be played Theremin‑style by varying the distance between the slide and the pickup to change the pitch. Touching the Vibraslide on individual strings close to the bridge produces monophonic sustain effects, or you can allow it to touch two strings for duophonic, eBow‑like effects. You can also bring the slide close to the guitar pickups to add distortion or even tape it to the guitar headstock to produce a similar result to a Sustainer guitar.

I can foresee myself spending more than a few hours connecting various effects to the loop jacks just to see what happens.

The Vibraslide’s ability to drive multiple strings simultaneously is both a key strength and its greatest challenge, because your playing technique needs to include damping of unwanted strings, which are otherwise likely to make unwelcome contributions to your performance. On the subject of playing technique, note that because the slide is not a hollow tube, it has to be used more like the slide bars you get with lap steel guitars than those worn over your finger. Other than that, though, you can use conventional slide techniques.

After only a short while I started to feel quite at home using this device, and I can see it getting plenty of use in my more experimental compositions. I can foresee myself spending more than a few hours connecting various effects to the loop jacks just to see what happens. The results that can be achieved in this way are not always intuitive, so experimentation is the key, but I found that using pitch‑shifters can be fun, and that a wah‑wah or flanger can change the harmonic structure of the feedback in a useful way. Putting a standard volume pedal in the loop also allows the sensitivity of the sustain to be adjusted during performance and, if you’re feeling really experimental, you can even feed the loop return from another instrument or audio track and see how that influences the sound.

Gareth has put up a few videos on YouTube, which demonstrate pretty well what the Vibraslide can do. It may not be a mainstream instrument, but for those working on film scores or composing ambient music, I think it has a lot to offer. The sound is very different from that of the eBow (unless you deliberately use the slide in a certain way near the bridge), not only because this is also a slide and can work polyphonically, but because you can retain the attack of a picked note, which is then followed by indefinite sustain. The Vibraslide might also attract the interest of lap and pedal‑steel players and, as with any new instrument accessory, it will be really interesting to see where its users take it next.

Here's Gareth's 2020 Kickstarter video explaining what the Vibraslide can offer.