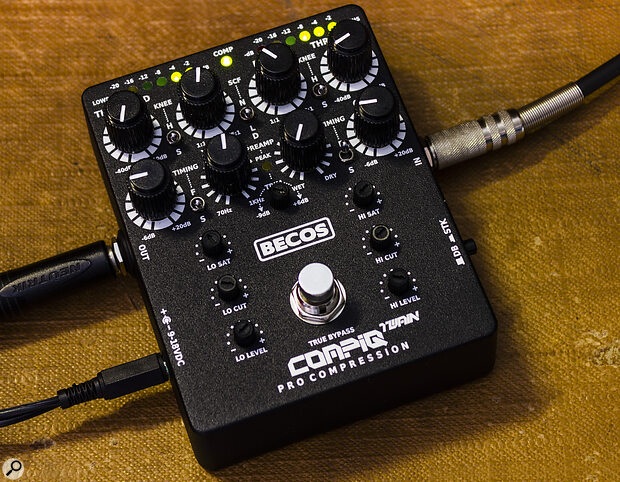 Love stompboxes but find pedal compressors frustratingly untweakable? This one’s designed with you in mind...

Last year I reviewed, and was hugely impressed by, the Becos CompIQ Stella pedal (www.soundonsound.com/reviews/becos-ciq-5-compiq-stella). What struck me most about this analogue VCA compressor was just how similar it was to the studio outboard and plug‑ins I tend to prefer to stompbox compressors. As well as a top‑notch, low‑noise signal path and the ability to handle line‑level signals, it gave me so much control over the nature of the compression. With features such as adjustable attack and release times and ratio, as well as a tilt EQ and wet/dry mix facility, I found it such a refreshing change from the myriad ‘dumbed down’ compressors that are more typically aimed at the guitarist market.

In the CompIQ Twain, Becos have built on that idea to create a pedal that I think it’s fair to say is unique. It doesn’t incorporate all of the Stella’s features (the one‑knob tilt EQ and user‑adjustable time constants are gone, for example), but it boasts a number of new ones, not least the option of split‑band or two‑stage ‘stacked’ compression. With 21 user controls on board (22 if you count the footswitch!) this is, like the Stella, an immensely tweakable device. If you’re a guitarist/bassist who’s relatively inexperienced with compressors there’s quite a learning curve, but anyone who’s used a studio compressor should find the layout fairly intuitive. The manual isn’t essential reading, but I’d recommend at least checking out the signal‑routing block diagram on Becos’ website, to head off those “Why isn’t this knob doing anything?” moments!

At heart, the CompIQ Twain is a mono (single input, single output) stompbox that contains two VCA‑based compressors and two vaguely tape‑like saturation processors; it offers a couple of different routing options for these processors, of which more below. Like most guitar‑ and bass‑oriented gadgets, the I/O are unbalanced and presented on quarter‑inch TS jack sockets, the input on the left and the output on the right. A standard power inlet accepts centre‑negative DC supplies from 9 to 18 Volts; curiously this is on the left‑hand panel in front of the output jack — not my preference for pedalboard tidiness, though not a major problem. The footswitch toggles the pedal on/off, and in the latter state it’s a hard rather than a buffered bypass. Despite the profusion of controls, it’s easy enough to get your fingers where you need them and everything’s clearly labelled.

A small pushswitch on the right side panel allows you to configure the compressors to operate in either Stacked or Dual Band mode. In Stacked, the signal flows from one compressor’s output to the other’s input. In Dual Band mode, the X‑Over knob dictates the frequency of a 12dB/octave Linkwitz‑Reilly crossover filter (70Hz to 1kHz): the left compressor controls operate only on the low band, while the right set process only the high band.

In both cases, the saturators operate on their own band. The saturation is not applied to the compressed signal but rather to the ‘dry’ one in parallel and, while its primary purpose is the injection of harmonic tape‑like ‘colour’, it inherently also compresses the dynamic range. What this means in practice is that dialling in colour to taste with the saturation doesn’t interfere with the dynamics of the compressed signal, so there’s some really interesting tonal flexibility here. Turn the Mix control fully anti‑clockwise and you have only compression, and fully clockwise gives you only the saturation. Between those extremes there’s a world of interesting tonality waiting to be explored. As with the Stella, the signal path is wonderfully clean, quiet and unobtrusive until you deliberately use these controls to dial in some dirt and girth.

The two compressors are identical and based around a THAT Corp Blackmer VCA. Each has its own pot for Threshold (‑40 to +10 dB), Ratio (from 1:1 up to Infinity:1) and makeup Gain (‑6 to +20 dB), along with miniature toggle switches for the knee shape (two positions: soft and hard), and Timing, which offers the choice of Fast or Slow auto‑adaptive attack/release modes. There’s also a six‑LED gain‑reduction meter for each one.

With the knee and adaptive timing modes, you can set these compressors to be anything from fast and assertive on the peaks, through snappy and grabby, allowing note onsets through but then clamping down, to more smooth and relaxed. I’m primarily a guitar player rather than a bassist, and you can, for example, have one compressor configured as a fast limiter to shave off wayward peaks when you dig in that bit too hard, and the other as a more general levelling compressor. Or you can have one pinning the low notes in place while you let the top strings soar and glide. But, of course, electric bass guitar absolutely loves two‑band compression and it also benefits massively from the built‑in side‑chain filter, which has three settings: N (normal, with no filter applied), L (low, a 90Hz 12dB/oct HPF) and D (Deep, a 12dB/oct 200Hz HPF). Whatever bass style you’re playing, the Twain can put you in total control: everyone will think it’s effortless brilliance on your part!

The saturation processors, used in conjunction with the Mix control, can take your bass or guitar tone from clean and pristine to a warm and nicely crunchy breakup. It’s pretty addictive, and there are occasions when you might want plenty of this effect, but usually I found it best used sparingly. The controls for this section are small plastic trim knobs, with knurled edges and a slot to indicate the position. They’re easy to tweak, but you wouldn’t want to risk that on a dimly lit stage.

A central ‑9 to +6 dB Trim control sets the level fed in parallel to the compression and ‘dry’ (saturation) signal paths, and by juggling this with the compressors’ Threshold controls and the Mix knob you can achieve the desired balance of compression and saturation. Six more of these trim pots are: Lo Sat, Lo Cut and Lo Level on the left, and Hi Sat, Hi Cut and Hi Level opposite. Lo and Hi Sat set the amount of saturation in each band. Lo and Hi Cut tame the harmonics (the LPF is pre the saturation, to prevent loud bass notes becoming too fuzzy, while the HPF is post, to tame ‘fizz’). The Level controls allow you to adjust the frequency balance of the Dry path, and affect the signal even if you’ve not dialled in any saturation.

Whatever bass style you’re playing, the Twain can put you in total control.

There are some other split‑band compressors out there. For example, I’ve found that the EBS Multicomp works well, but it is nowhere near as configurable as the Twain and offers nowhere near the amount of tonal control either. The FEA Labs DB‑CL is another option and this gives you more control than the EBS, including manually variable attack and release times (which I missed only occasionally on the Twain: probably more due to my tendency to tweak than because I found anything lacking in the sound). But it’s an opto compressor, with the inherent character that brings, and overall it isn’t as versatile as the Twain. Then there’s the fact that the Twain can accommodate line‑level signals: this and the pristine signal path make it suitable for use as a studio processor. The combination of two‑stage compressor and saturation makes it an interesting toy to try on vocals, for example, and while the Stella’s dedicated tilt EQ is missing, in Dual Band mode you can adjust the two bands’ levels to similar effect. In short, if there’s a more versatile analogue stompbox compressor out there, I’ve not come across it yet! Recommended.

A supremely versatile two‑band dynamics processor that can handle instrument or line sources. I don’t know of anything else out there that can match it.