I spend much more time in the studio than on the stage, and have grown so used to the clean operation and degree of control offered by many studio compressors (whether hardware or software) that most guitar compressor pedals seem frustrating. Even the better ones seem to focus more on saturation and character than on controlling the dynamic range — great if you want to change the character, less so if you don’t. The new Becos CIQ‑5 CompIQ Stella, though, doesn’t suffer from such limitations — it can sound wonderfully transparent, or full of character, and there’s oodles of control at your fingertips. 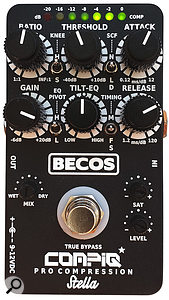 The Stella is, essentially, a studio VCA compressor in a pedal; it employs THAT VCA chips like those found in, for example, modern iterations of the SSL bus compressor. But it’s actually more than that, since this ‘compressor’, as Becos humbly describe it, boasts impressive configurability and some very handy tone-shaping options, including a saturator and a tilt EQ. Importantly, it’s really clean-sounding, which is obviously a good thing per se, but less obviously means you can use the compressor’s make-up Gain knob (from -6 to +20 dB) to help your guitar hit an amp’s sweet spot without introducing lots of noise.

This standard-sized pedal runs off a centre-negative 9-12 V DC PSU (not included) or a 9V battery; having to remove four screws to access the battery compartment is a minor frustration. The pedal turns on when a TS jack is inserted in the input, and there’s a true bypass.

Six knurled knobs control the main parameters, and four tiny toggle switches nestling between them offer options for different controls. Around the footswitch are three more knurled knobs for less frequently used functions. Although these are much smaller than the others, I found finger operation easy enough, but they’re also slotted for turning with a screwdriver or, perhaps, a pick. With 14 controls in such a small space, I was surprised to find that nothing felt cramped or awkward to access. There are no lights other than the meter LEDs (one for on/off, six for gain reduction) but the white legends are crisp and clear and the knob and toggle positions are easy to see at a glance.

The Stella is, essentially, a studio VCA compressor in a pedal; it employs THAT VCA chips like those found in, for example, modern iterations of the SSL bus compressor. But it’s actually more than that...

The ratio control runs from 1:1 (no compression) to INF:1 (infinity or limiting), and the adjacent toggle selects a soft or a hard knee. The Threshold’s 50dB range is plenty while still allowing usefully precise control. Setting it higher allows you to use this device with line-level signals, which is a nice bonus if you run short of hardware compressors in the studio! Another toggle engages a side-chain filter with three different options, to make it more/less sensitive to different frequencies. Next is the attack knob, which ranges from 0.12 to a 12 ms. This and the release (0.12 to 120 ms) are joined by a three-way toggle switch (bottom right) which selects between manual and two automatic time-constant settings. The make-up Gain and smaller wet/dry Mix knobs complete the top-panel compressor controls. So there’s bags of control on offer — just the thing if you’re a born tweaker, or are more familiar with typical studio tools. I like it! (If you’re one of those who find this much control daunting, Becos make the simpler MINI and MINI One versions, which use the same internal circuitry as the Stella).

The icing on the cake is provided by the tilt EQ and Sat facilities. The Tilt‑EQ knob, as you’d expect, simultaneously applies a gentle (up to 6dB) shelving boost or cut to the highs, and the opposite to the lows. The final toggle switch allows you to choose between two turnover or ‘pivot’ frequencies. The effect is to ‘tilt’ your sound to favour brightness or deliver a more dominant low end. While 6dB might not sound a lot, remember there’s up to a 12dB difference between the high and low ends; it can make a very noticeable difference to your sound, and I never found myself wanting to apply anywhere near the maximum. Tilt EQ is a studio tool I use often, but here I found it really useful in tailoring a guitar sound to a specific amp or song, even without the compressor kicking in.

The saturator, labelled SAT, affects only the dry signal path, and is intended to mimic the sound of analogue tape distortion. There are internal jumpers to engage/ disengage high- and low-pass filters to tailor this effect, and the manual makes recommendations about how best to set these for different instruments and effects. It’s not exactly like genuine analogue tape saturation, of course, but it is nonetheless a pleasant-sounding harmonic distortion and using this alongside the wet/ dry mix control allows you to coax a much wider range of sounds from an instrument than I’d anticipated.

My tests were mainly with guitar, and for that instrument the huge configurability is so welcome. You can control the peaky twangs of wayward picking, increase note sustain, or raise low-level details with parallel compression easily, and the tilt EQ and saturator are so useful. You can keep your sound clean or dial in vibe and rebalance the tone as you wish. Bass players should absolutely love this thing (though I suspect they may be even more enamoured with the company’s new split-band compressor). In short, it’s what I’ve always wanted of a compressor pedal. But what about the price? There are cheaper compressor pedals, sure, but nothing like this. And the fact you can use it on line-level sources makes it better value still. You’d pay more if all this were mounted in a rack unit or in a 500-series module.