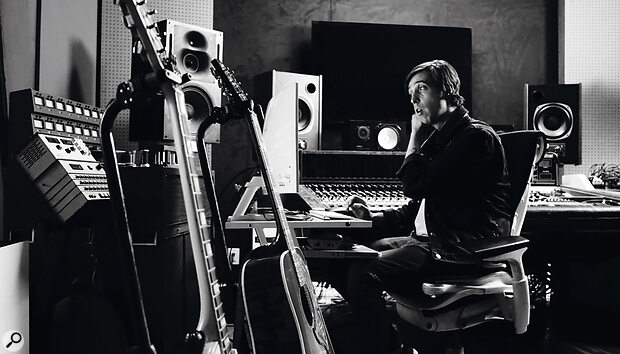 Resident in Mexico City, engineer Juan Sebastián Rodriguez thanks British producer Phil Vinall for his baptism into the recording industry. It was by working with Vinall, who developed a relationship with Mexico City through his work with lauded Mexican rock band Zoé, that Rodriguez was able to hone his craft, eventually taking home a Grammy Award for his own work with Zoé. Rodriguez has also worked at the beautiful Sonic Ranch in El Paso, Texas. The largest residential recording complex in the world, it’s home to five studios designed by the late legendary acoustician and studio designer Vincent van Haaff. Rodriguez has since built a considerable reputation for himself, working with a wide range acts from Phoenix to the Growlers to Alessia Cara. “I learned in the rock & roll department,” Rodriguez explains. “Using microphones, not samples!”

An artist called Martin Courtney. The record is called Magic Sign. I think it has something that that many modern recordings are lacking. This kind of record brings something back to life. You can hear a musician in a room, like truly recording! Kind of like Elliott Smith with Figure 8. I’m really into those kinds of records. Records where the vast majority of it is probably recorded live, or at least where the drums and bass are live, so you can hear that dance between the rhythm section. Everything works together in a more — I hate this word, especially in the music industry — organic way. But yeah, it feels more real. And it has been quite a while since I’ve listened to something modern or new that actually moved me. I highly recommend it, it sounds amazing. And the mixer, Rob Schnapf, has done some really cool work.

I think it’s also the the longest project: Zoé with the record Aztlán. With that record, I had the chance to get my first Grammy. I’ve been involved with a couple of projects that really take up part of your life, where you’re stuck for seven or eight months in the recording studio, working on the same 12 songs. I don’t want to say it was painful... but it was! You know what I mean, it was the result of hard work. And obviously the budget permitted that kind of stuff. Now, not every band has the budget to be in the studio for eight months. So that’s a big thing.

One track on the record we recorded totally live. And we were really drunk, actually, during the session. We were totally wasted! I don’t know how I was able to pull that one off, because I was really drunk. We really got into that song. It was like, five in the morning, after a whole day of work. It was actually not meant to be the final multitrack, it was just a full pass of the band to get a structure in...