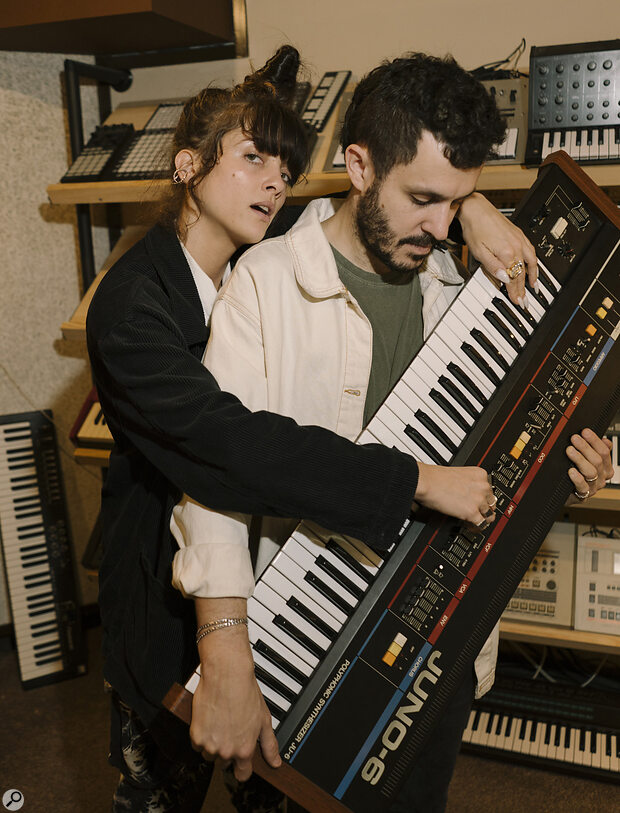 Tel Aviv’s Noga Erez produces her dynamic, hip‑hop‑infused pop under her own name, but is keen to point out that her outfit is very much a duo: “I don’t even know how to talk about it as an ‘I’ any more,” she says. The other party in question is Erez’s partner and musical collaborator Ori Rousso, whom she met while learning Ableton Live. “Ori is the beat‑maker and the producer of the project,” Erez explains. “It’s a collaborative process where we’re both working on the arrangement and production of the songs. Ori has his hands on the wheel when it comes to the sound design and the direction of the production.”

“We really love the music here in Tel Aviv,” says Rousso, “but Noga and I have always been outsiders. We’re not really in a scene. It’s very much just us.”

Erez agrees. “It’s extremely diverse here. Israel is a very small place, but it’s kind of this cultural melting pot. You have people here with musical backgrounds — from Africa, Asia… There’s obviously a very present Western influence. So, you get that all together. Mixed and mashed up. All kinds of music.”

“Sometimes we say things in Hebrew in the songs,” Rousso laughs, “stuff no one will understand except the Israeli audience!”

“Yes!” interjects Noga. “We have private jokes with our Israeli audience. Our home base. They’re our besties!”

N: Ori, let’s count, and then see if we say the same thing. One, two, three… Silk Sonic!

N: OK, I lied. I can stop listening to Silk Sonic, but I have been listening to it a lot. It’s the new project from Bruno Mars and Anderson .Paak. I love that project — it’s just a production school!

O: Also, we love Silk Sonic because it’s really, really live music. It’s like, super live! It’s been their vibe in interviews, saying they wanted to bring that live element. The album we’ve put out now is very live. We felt connected. We felt like they stole from us! [laughs]

N: They definitely did!

O: I said the band Izabo. They’re Israeli and don’t actually exist any more, but they have three albums. They sing in English — it does sound quite British, actually. It’s interesting. Their music wasn’t really similar to anything else. Their guitarist is the best guitarist in the world, in my opinion.

O: I think our album KIDS.

O: It is a great album. Am amazing album! We love it!

N: This is the project that got us pro. In every single aspect of making music. But, I think, especially when it came to songwriting. For me, the songs we wrote for this album are far better than anything we’d done before. We gave it more attention, more time. We wanted the songs to be structured, to feel like they could exist in any type of production and stand up on their own. We released the album a little less than a year ago and have performed it so many times. And my mind is still blown by some of these songs. Like, I can’t believe we did this.

O: Yes. Also, I always think about the pandemic when I think about this album. The pandemic saved this album. We had to postpone it for a year, and in that time we changed some of the songs completely and wrote some new songs, had time to take it slow and seriously. I don’t know, I think it saved us. Thank you, pandemic!

O: Windows! We’ve never had our own studio. We’re always jumping between studios because of tours and things like that. So, each time we come back to Israel and want to change the atmosphere, we’ll find someone who will rent out their studio for some sessions. Our new studio has two huge windows, up on the third floor, and it’s the first time we’ve had windows in the studio! Usually it’s down underground. So it’s the best thing.

N: Ori. But not just because he taught me Ableton!

O: I learned music production at college when I was 22. I had one teacher who would kind of just make up each lesson — he was a bit lazy, but he was very charismatic. His lessons were always nuts. He’d just be there talking, and some of the students would be thinking, ‘This lesson is about nothing!’ But each time it ended, I was just thinking, ‘Oh, my God! I love this guy!’ Since then I’ve been talking to him about every month — usually when I have technical issues, because he knows how to solve everything, but also he’s really a spiritual leader. It might have been a lot of clichés, but the way he said things was real. That there are no rules… All the things that, as a student, you need to hear.

O: We’ve had a few over the years, for checking out a new studio or something. I always go to James Blake, for some reason.

O: Yes, for the low end. ‘Limit To Your Love’ and ‘Unluck’. And recently, for ‘VIEWS’ [from the album KIDS] we went to songs like ‘Uptown Funk’ or ‘24K Magic’, because we love the mixing of that engineer, especially. His name is Serban Ghenea. So, it changes.

N: Can we say the computer?

O: Let’s assume that the island has monitors and laptops. I’ll bring the new thing we bought recently, which is the Yamaha Reface. It’s a small keyboard, with so many different sounds.

N: It has a beautiful sound. It has batteries as well — it’s like the keyboards we used to use as kids! It’s very easy to use. I’d also say a piano. A piano on the island would be everything, a whole orchestra.

N: I feel like everything has been brought back already!

O: I don’t know if it’s related… recently I wanted to do some tracking with a cembalo, a harpsichord. Like on ‘Golden Brown’! Like most of the people in the world, we also saw the Beatles film [Peter Jackson’s ‘Get Back’]. It was so weird to watch it. At first we hated it because, I don’t know, something in the editing was annoying. But then we couldn’t stop talking about the Beatles. We’ve always loved them, but that song, ‘Because’, with the harpsichord on it…! And now I want to use it in one of our songs!

N: I think, Nigel Godrich. He’s our first love. As a producer, it’s the first time we’ve just loved everything someone has done. Radiohead, yes, but also Beck, Paul McCartney… he did Natalie Imbruglia’s ‘Torn’, as well!

N: Take your time. Take whatever time you need. To listen to the song, to get to that point where you find that everything about it gives you satisfaction. I know that for some people that’s confusing advice. Because sometimes you never get there. And we’re kind of like that. Maybe the best advice would be to find that sweet spot, between deadlines and taking your time. But, I think more people now have to be able to handle the pressure. So give your art the respect of giving it time to evolve into whatever it needs to evolve into.

O: I don’t think this is the smartest answer… but I have no issue with myself of 10 years ago! I would just say, OK, you’re good! Everything is OK! We’re in a phase where we’re happy with what we’ve achieved. We want more, but we’re happy. I think we needed the last 10 years to get to this point. I’ve learned a lot.